Eubie Blake was born 138 years ago today. He lived and played long enough to one day be the musical guest on Saturday Night Live. Here he is in 1972, at age 85, playing some classics he wrote in a musical genre he helped to invent:

The state of Mississippi certified the 13th Amendment, outlawing slavery, on February 7. Keep in mind this is Mississippi we’re talking about, so they didn’t certify the 13th Amendment until February 7, 20–goddam–13, several weeks after, despite that state’s fervent wishes, Barack Obama was sworn in for a second term as president.

If you want to know why it took Mississippi more than a century to finally, begrudgingly, acknowledge its membership in the United States of America, you could read almost anything written by historian Eric Foner — who turns 77 years old today. You might start with his most recent book, The Second Founding: How the Civil War and Reconstruction Remade the Constitution, or just go right to the classic Short History of Reconstruction. 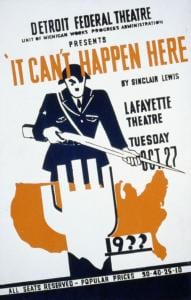 Garth Brooks and Eddie Izzard were both born on February 7, 1962. In honor of their 58th birthdays, here’s Todd Snider’s Garth Brooks Story, and here’s Eddie Izzard’s “Cake or Death?” Chris Rock is exactly three years younger than those guys. Here’s an old, but still relevant, Rock bit on Patriotism vs. Hatriotism.

Laura Ingalls Wilder was born on February 7, 1867, in a little house on the prairie, which was also, of course, the name of the long-running television show based on Wilder’s memoirs. It was one of the few enthusiastically approved-of TV shows when I was growing up in white evangelicalism because, as Lucille Tarlek explained on WKRP in Cincinnati, it was “a fine, wholesome show. It’s about blind children out west, and every week they have a fire, or someone gets an incurable disease. We enjoy it very much.”

And novelist Charles Dickens was born 208 years ago today.

Did you guess that I’d take this occasion as an excuse to post, yet again, a link to George Orwell’s insightful essay “On Charles Dickens”? Well, you’re right. Of course I did. It starts like this: “Dickens is one of those writers who are well worth stealing. Even the burial of his body in Westminster Abbey was a species of theft, if you come to think of it. …”

Brazilian archbishop and liberation theologian Hélder Câmara was born February 7, 1909. You’ve surely read at least one famous quote from him. It’s a good one: “When I give food to the poor, they call me a saint. And when I ask why they have no food, they call me a communist.”

Progressive Christian
Sinnerman, where you gonna run to?
slacktivist

Progressive Christian
Load up on guns, bring your friends
slacktivist