Fighting for a system built to fail

Today is the 211th birthday of Charles Darwin.

Cotton Mather was born on February 12, 1663, in Boston. He wrote more than 400 books, not all of which were completely bonkers. Mather’s ideas about spiritual warfare and its corporeal manifestations were as whackadoodle as anything spouted nowadays by Frank Peretti or Paula White or the writers at Charismanews, and due to his spiritual influence in the Massachusetts Bay Colony, those ideas were almost as lethally consequential. But for all his beliefs about witches and devil-armies, there were limits to his credulity and Mather took a hard stand against the anti-vaxxers of his day.

Erik Loomis’ visit to the Mathers’ tomb offers a good brief look at Cotton’s role in the Salem Witch Trials. For a look at just how far, far out there Mather’s Peretti-ism went, beyond those infamous trials, see this account of the time that Gloucester was supposedly besieged by spectral soldiers from the underworld.

February 12 is also Georgia Day, commemorating the founding of the then-colony of Georgia in 1733. From 1733 and for almost the next 20 years, slavery was legal in colonial Boston and Philly and New York City, but illegal in the colony of Georgia, which founder James Oglethorpe had envisioned as an agrarian utopia of small farms owned by refugees from England’s debtors prisons, who would live in peace and modest, self-reliant prosperity alongside the farms and towns of the native Creeks and Muscogee.

That changed in 1751 due to evangelist of whiteness George Whitefield, whose competing vision for Georgia of huge plantations, concentrated wealth, human trafficking and stolen wages was regarded as morally superior to Oglethorpe’s original idea. On Georgia Day in 1825, the white plantation owners who had come to dominate the state celebrated the colony’s founding by expelling the last of the Muscogee.

Olivia Hooker was born in Muscogee, Oklahoma, on February 12, 1915. She and her family moved to Tulsa and she was just 6 years old when she hid with her sisters as MAGA Klansmen destroyed their home during the Tulsa Massacre. White terrorists killed about 300 black Americans in that attack, which included firebombs dropped from airplanes. Most of Tulsa’s black neighborhoods were destroyed, leaving more than 10,000 families homeless. Oklahoma’s white justice system failed to convict anyone for any of the murders or destruction of property.

Olivia Hooker grew up to become the first black woman to join the U.S. Coast Guard and later became a psychologist and a professor. In 2003, at the age of 88, Dr. Hooker was a leading plaintiff in a federal lawsuit seeking justice for the Tulsa Massacre. The Supreme Court dismissed the case in 2005.

The great Judy Blume turns 82 today. Christina Ricci turns 40. Arsenio Hall turns 64. (Coming to America 2 is due to be released late this year. Hall is listed as reprising his role as Semmi, but if that turns out to be his only role — if he doesn’t also return as Morris the barber and as the Rev. Brown — I will be very disappointed.)

Former Pennsylvania Sen. Arlen Specter was born on February 12, 1930. Specter, who died in 2012, was a windsock — an otherwise thoroughly unprincipled pragmatist who promised the people of the commonwealth that he would stand up and speak out for whatever it was that 50.01% or more of them thought was most important on any given day. I never trusted him, but I trusted that he would listen when I wrote or called his office. We often hear politicians condemned for governing by polling, or for flip-flopping, or for pandering, but while those things may be as ignoble as my former senator was, they can also make for oddly responsive representation.

February 12 is also the birthday of Abraham Lincoln, America’s greatest president. That’s a good excuse to link again to my favorite archival find, an excerpt from the diary of abolitionist Baptist missionary Nathaniel Brown that provides an eyewitness account of Lincoln’s thinking on the eve of the Emancipation Proclamation. 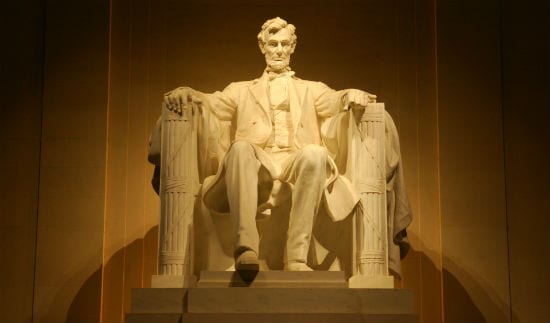 The Battle of the Herrings was fought on February 12, 1429. It was one of many battles in which the French lost to the English due to their frequent mistake of having vastly superior numbers, but it stands out from the rest because of all the herring.

And finally, February 12 is also, among other things, the feast day of St. Julian the Hospitaller, canonized as an official saint of the Roman Catholic Church despite almost certainly never existing.

Julian is the patron saint of hospitality because when his parents came to stay in his home he killed both of them in their sleep with a sword. No, really. It’s a very strange story, dreadfully ironic and sad. It’s a piously Christianized medieval legend based on Oedipus. The story is supposedly set in the first century, but doesn’t seem to have been told at all until more than a thousand years later. No storyteller or religious writer ever mentions Julian until the 1300s. That casts a bit of doubt on the legend’s historicity. The bits about witches cursing an infant and a talking stag also might strike one as something other than a historical account.

Canonizing a fictional character might be more excusable if St. Julian seemed at all saintly, but his legend is a weirdly amoral morality tale. Julian is presented as innocent in the killing of his mother and father because he mistakenly thought he was merely killing his wife and her lover (it was dark). I suppose if I were to find a moral in this story it would be this: If witches curse you at birth with a prophecy that you will one day murder your parents, you should probably try to avoid murdering anybody lest they turn out to be your parents after all.

February 13, 2020 The grand facade so soon will burn
Recent Comments
0 | Leave a Comment
Browse Our Archives
Follow Us!

Progressive Christian
And the Bible didn't mention us, not even...
slacktivist