The grand facade so soon will burn

I saw Gabriel live on the Amnesty tour at JFK in — 1987, maybe? He did this one with Youssou N’Dour and some astonishing dancers. Tracy Chapman came out for a duet on “Don’t Give Up.” Phew, that was good.

February 13 is also the birthday of Tennessee Ernie Ford, Peter Tork, and Henry Rollins. As far as I know, they never collaborated on anything, which is a shame.

Stockard Channing turns 76 today. It’s frustrating that she has yet to appear as a guest star on Grace and Frankie.

Jerry Springer also turns 76 today. When I first got involved with the Philly theater scene, I was surprised to learn how many regional actors here had gotten work portraying the “guests” on Springer’s talk-show circus. It was a relief, though, to realize that Springer’s parade of misguided misfits and horrible couples was just theater.

Thomas Robert Malthus was born on February 13, 1766. The population of the world at that time was about 800 million — about a tenth of what it is today. “Malthus wasn’t wrong, he was just delayed,” the mad farmer Wes Jackson said to me years ago. And, yeah, the grim math holds up. But it also turns out the problem of sinks has become more urgent than the problem of wells.

February 13 is World Radio Day, an international event sponsored by UNESCO that you can probably learn more about through some podcast.

The Yellow Fever epidemic of 1793 killed a tenth of Philadelphia’s population. Due to Benjamin Rush’s (mistaken) theory that African Americans would have some immunity to the disease, he recruited Jones and the Free African Society to assist the sick and bury the dead. In 1793, nobody knew how to effectively treat or prevent Yellow Fever, but black nurses and black Philadelphians, led by Jones, cared for the sick in the nation’s capital while as many as 20,000 others fled the city.

Jones was a powerful preacher who frequently preached for the abolition of slavery. His most famous sermon, delivered on New Year’s Day in 1808, was based on a text from Exodus 3:7-8 — a passage redacted from the “Slave Bible” published the year before. Here’s a taste of that sermon:

God has seen the affliction of our countrymen, with an eye of pity. … God has seen ships fitted out from different ports in Europe and America, and freighted with trinkets to be exchanged for the bodies and souls of men. God has seen the anguish which has taken place, when parents have been torn from their children, and children from their parents, and conveyed, with their hands and feet bound in fetters, on board of ships prepared to receive them. God has seen them thrust in crowds into the holds of those ships, where many of them have perished from the want of air. God has seen such of them as have escaped from that noxious place of confinement, leap into the ocean; with a faint hope of swimming back to their native shore, or a determination to seek early retreat from their impending misery, in a watery grave. God has seen them exposed for sale, like horses and cattle, upon the wharves; or, like bales of goods, in warehouses of West India and American sea ports. God has seen the pangs of separation between members of the same family. God has seen them driven into the sugar; the rice, and the tobacco fields, and compelled to work — in spite of the habits of ease which they derived from the natural fertility of their own country in the open air, beneath a burning sun, with scarcely as much clothing upon them as modesty required. God has seen them faint beneath the pressure of their labors. God has seen them return to their smoky huts in the evening, with nothing to satisfy their hunger but a scanty allowance of roots; and these, cultivated for themselves, on that day only, which God ordained as a day of rest for man and beast. God has seen the neglect with which their masters have treated their immortal souls; not only in withholding religious instruction from them, but, in some instances, depriving them of access to the means of obtaining it. God has seen all the different modes of torture, by means of the whip, the screw, the pincers, and the red hot iron, which have been exercised upon their bodies, by inhuman overseers: overseers, did I say? Yes: but not by these only. Our God has seen masters and mistresses, educated in fashionable life, sometimes take the instruments of torture into their own hands, and, deaf to the cries and shrieks of their agonizing slaves, exceed even their overseers in cruelty. Inhuman wretches! though You have been deaf to their cries and shrieks, they have been heard in Heaven. The ears of Jehovah have been constantly open to them: God has heard the prayers that have ascended from the hearts of his people.

Finally, the great Iowan painter Grant Wood was born on February 13, 1891. We’ve all seen “American Gothic” so many times that it’s hard to still see it, so let’s look at another wonderful piece from Wood. This is “Parson Weems’ Fable” (1939), and there’s so much going on here. 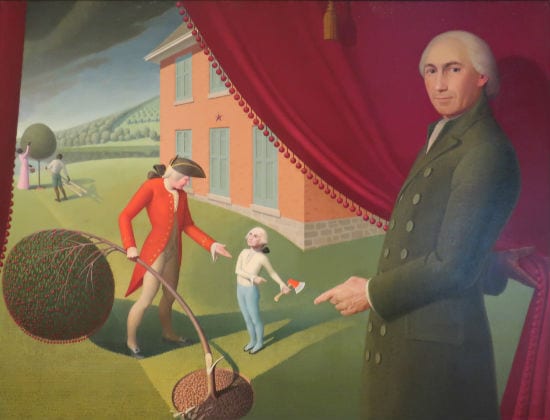 February 12, 2020
Fighting for a system built to fail
Next Post

Progressive Christian
Flags on the side of the highway and...
slacktivist

Progressive Christian
Watch out now, I'm gonna get there
slacktivist