David Swartz offers a lot to chew on in this (semi-)recent consideration of “Is There a ‘Cosmopolitan Evangelicalism’?”

I appreciate why Swartz uses the “populist vs. cosmopolitan” framing that seems to be having a moment in both political and religious conversations, but I’m still not convinced it’s a helpful framework. It can be misleading in the same way those red-and-blue maps of, say, Nevada are misleading, with their tiny specks of blue “elites” contrasted with the vast majority of red acreage. Yes, the square mileage of “blue” territory is smaller, but that smaller area is where most of the people live. Most people are cosmopolitan and a “populism” that views most people with hostility ain’t gonna be very popular. “Cosmopolitan” is just not a great proxy for “elite.”

Nor is “populist” a good antonym for cosmopolitan. I appreciate that more precise antonyms for that word — provincial, parochial, etc. — might seem impolite, but it’s just confusing to use “populism” as a word meant to exclude the most populous areas, to exclude most of the populace. The recent 2020 Election Map from xkcd helps to clarify why “populism” seems misleading here: 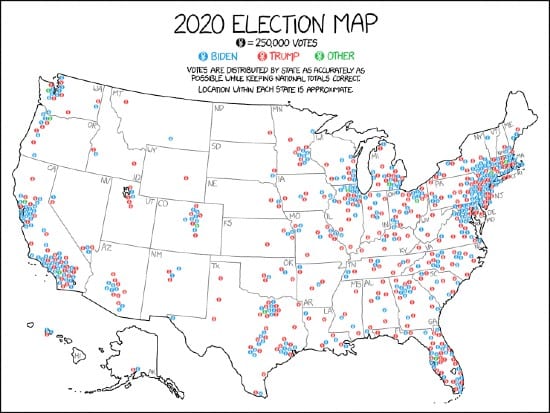 Those dots are where actual people actually live. The rest of the map is, by comparison, as empty as it looks.

Swartz’s discussion isn’t about the general populace, though, it’s about white evangelicals, and for that specific sub-populace, the cosmopolitan-populist framework seems to work a little better. It’s true, after all, that most white evangelicals would not consider themselves “cosmopolitan.” One synonym for cosmopolitan, after all, is “worldly,” and white evangelicals are proudly, defiantly opposed to being “worldly.” (Whether or not their otherworldly theology and talismanic abstinence from, say, drinking and dancing actually prevents them from being “conformed to this world” is another, larger question.)

This fierce determination to avoid worldliness makes the white evangelical sub-culture view the larger cosmopolitan world with hostility. So here you have a minority that regards itself as separate and distinct from the vast majority of the populace, and as morally superior to that populace. The word usually employed to describe that attitude by a minority toward the majority is “elitism.” So you can see, again, why I’m not wholly satisfied with this notion of a populist-cosmopolitan spectrum.

Despite that, Swartz’s piece provides some helpful insights into the rifts between — for want of a better term — “cosmopolitan evangelicals” and the much-larger body of “populist” white evangelicalism. I particularly appreciated this bit:

The point is not to Pollyannishly search for a respectable and salvageable evangelical identity. It is not to redefine our ways out of historical complicity or to reduce the very real commonalities all white evangelicals share. One question that could emerge from a better appreciation of the scope cosmopolitan evangelicalism is why, given its infrastructure, has it had seemingly minimal effects on large swaths of popular evangelicalism?

That’s an excellent question (and, maybe also, a harsh indictment politely reframed as a question).

Another part of the answer involves the biggest problem with the “Cosmopolitan vs. populist” framing — the elephant in the room that it seems to have been designed to avoid addressing explicitly. And it involves how cosmopolitan evangelicalism seems just as determined to sidestep as this framework is. You know, racism.

The title for this post, you may have recognized, is from Wicked, so here’s Kristen Chenoweth’s version of “Popular.”

December 24, 2020 Vote fraud in swing-state Pennsylvania
Recent Comments
0 | Leave a Comment
Browse Our Archives
get the latest from
slacktivist
Sign up for our newsletter
POPULAR AT PATHEOS Progressive Christian
1