‘Nothing has worked for any of them’

“But so far, nothing has worked for any of them.”

That line comes deep in this dismaying piece by Jesselyn Cook, “‘I Miss My Mom’: Children Of QAnon Believers Are Desperately Trying To Deradicalize Their Own Parents.” These heartbreaking stories parallel those told by local pastors in the articles we recently discussed here (“This is not a pastoral problem with a pastoral solution“). And the clearest parallel is in that depressing line: “So far, nothing has worked for any of them.” 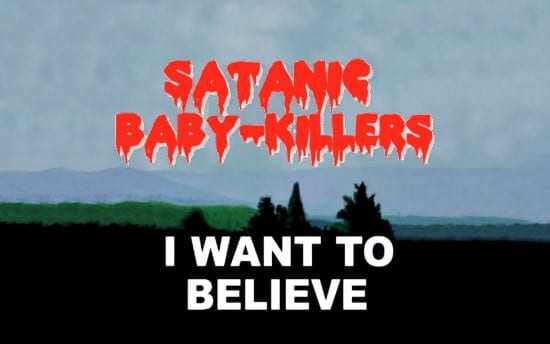 That underscores the depth of the challenge here. So much of the “pastoral” advice and pop-counseling advice centers on the potential eventual benefits of building relationships, developing mutual trust, displaying kindness, patience, and empathy, and giving the Q-addled space to realize that they are loved. But the stories Cook shares involve children and their parents — cases where all of those conditions were the starting point and all of that laudable advice is redundant.

Jose A. Del Real’s long, sad Washington Post story — “They’re worried their mom is becoming a conspiracy theorist. She thinks they’re the ones living in a fantasy world” — isn’t exclusively about QAnon, but about the whole constellation of related right-wing misinformation and delirious fever-dream conspiracy theories (“Kraken” nonsense, the Big Lie of “Stop the Steal,” anti-vax covid-denialism, etc.) that leads to the same fantastical conclusions with slightly different language. The parent in this story, which takes an intimate look at a single family, still winds up at the same QAnon destination of a nebulous conspiracy of Satanic baby-killers.

Anastasiia Carrier’s Politico report from last month — “‘This Crap Means More to Him Than My Life’: When QAnon Invades American Homes” — covers much of this same territory, exploring some of the anguished stories of the thousands of Q-widows and Q-orphans supporting one another in the Reddit forum r/QAnonCasualties. Those stories show that the family Del Real profiles is not exceptional. And they all underscore Cook’s point: “So far, nothing has worked.”

These stories all challenge the solemn-but-hopeful platitudes of “pastoral” approaches to rescuing those caught up in the deception of QAnon. For another example of that bad advice, see the following, which is the sputtering conclusion of Peter Blake’s up-until-then helpful discussion of “Why Fake Conspiracies Persist, Regardless of the Evidence against Them“:

Appeals to logic and evidence did not work, but new research suggests a more patient approach: listen and genuinely try to understand what your friend believes and search for common ground.

Psychology may never find a way to change the minds of a group of believers. Instead, we may need to do the harder work of talking to one human at a time.

I suspect that so many pieces on this subject end this way because writers don’t want to leave their readers in despair. You’ve got to give people some hope, right? So after surveying all the evidence and psychological explanations for why this is such a pernicious problem, the only thing left is to suggest that we all buck up and settle down for “the harder work of talking to one human at a time,” investing hours and weeks and months of patient listening, demonstrations of empathy, and the long, slow building of trust.

That sounds plausible until you realize that everything Blake is describing there is exactly what all of the people in all of those stories from Cook, and Del Real, and Carrier have been doing, to no avail, on a very deep level and for a long time.

“So far, nothing has worked for any of them.”

Blake’s solemn admonition “to do the harder work of talking to one human at a time” reminds me of a line from a song, also on the topic of the many ways children lose their parents: “Men go crazy in congregations, they only get better one by one.”

I always liked that line, and found something hopeful in its promise of redemption and healing one by one by one.

But I don’t think it applies to the dilemma facing all of those families, children, and spouses in all of those stories linked to above. This pastoral or psychological approach won’t change the beliefs of any of the loved ones they’re losing to QAnon and Satanic baby-killerism. This approach doesn’t work for (at least) two reasons: 1. The victims of this are individuals, but it is not an individual phenomenon; and 2. These folks are not actually “believers.”

This is what Dietrich Bonhoeffer argued, writing from the concentration camp to which he’d been sentenced by the crazed congregation of those caught up in the most infamous outbreak of this fever. Bonhoeffer didn’t skirt around the problem with euphemisms about “conspiracy theories.” He cut to the heart of the matter, identifying the problem not as misinformation or mistaken belief, but as folly. Folly, Bonhoeffer said, “is a moral rather than an intellectual defect.” And it was also, he said, “a sociological rather than a psychological problem.”

Recognizing those two points, Bonhoeffer argued, was essential “if we are to deal adequately with folly.”

That’s where I see hope for all those families tragically being torn apart by the folly of QAnon. That’s where I see the promise of an approach that might actually work. It’s a more hopeful alternative to all of the pastoral and psychological approaches tacked on as inadequately “encouraging” codas to all of those dismal descriptions of the problem.

We need an alternative to those approaches because, after all, “So far, nothing has worked for any of them.”