I only played two seasons of Little League. After that, I played Bread of Life baseball.

Bread of Life Ministries, Inc., was a storefront church and community cornerstone in West Plainfield centered around Mrs. Washington. She wasn’t the pastor or the preacher, but she was the matriarch — the engine and the leader that held it together. She was also the mother of one of my classmates at my private Christian school, which is how I wound up as a Bread of Life Bulldog the summer after fourth grade.

The church sponsored the team because Wheatie’s much-older brothers had been standout ballplayers and they could coach us. And because so many neighborhood kids played and ate and all-but-lived at Mrs. Washington’s house during the summer that she enlisted her sons (and nephews, cousins, and sons-in-law) to start a team to keep them busy. That first year, only about eight kids from the neighborhood signed up, so Wheatie recruited me and a bunch of his other Timothy Christian classmates to fill out the roster. 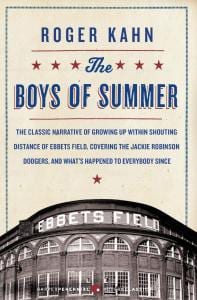 The second year, Bread of Life sponsored two teams. Most of my fellow white classmates from Timothy had dropped out by that point, but I stuck with it because I liked my teammates and coaches and I loved the game. So did my dad. I liked my pitching coach, Chuck (Wheatie’s uncle or maybe brother-in-law?), because he was smart and patient and knew his stuff. My dad liked Chuck because it turned out he was Joe Black’s nephew. My dad still treasured the memory of every pitch of Black’s complete-game victory over the Yankees in Game 1 of the 1952 World Series. (Once Dad realized that Brooklyn Dodgers connection he gave me a copy of The Boys of Summer.)

The year after that, Bread of Life stopped sponsoring teams and began running its own league — leagues eventually, for kids from grade school up through high school. At its peak, Bread of Life took over much of Warinaco Park in the summer, shuttling dozens of kids from West Plainfield up there in a second-hand pink school bus. (They told the kids that if they helped raise the money for the bus, they’d get to paint it however they liked.) The league was praised for “keeping kids off the streets,” but it also earned a reputation for good baseball — so much so that some top prep athletes from very different neighborhoods joined our teams.

Anyway, this story is from that second summer, just after our fifth-grade year. Bread of Life hadn’t bought the old school bus yet, so getting from Mrs. Washington’s house to Roosevelt Park meant piling half the team into Coach Buck’s Impala and the other half into my dad’s VW minivan. (Dad’s volunteer chauffeur service earned him an MVP plaque — “Most Valuable Parent.” That plaque hung in his office next to his law-school diploma until the day he retired.)

So one day my dad had some meetings and the plan was he’d drop me off at Mrs. Washington’s for lunch, then come back a few hours later to take us all to practice. (One more for lunch wasn’t a big deal at Mrs. Washington’s — she fed half the kids on West Seventh Street all summer long.) After lunch, we still had an hour or so before practice and she shooed us outside to play.

It was me and Wheatie, Ernie, Adam, Hector, and I forget who all else, but there were eight of us there — enough for a four-on-four basketball game. What are the teams? Somebody suggested shirts and skins, but it was hot and nobody wanted to put their shirts back on to play. And so, being a bunch of not-quite sixth-graders, we settled on the Very Bad idea of dividing into teams based on skin color. And, being a bunch of American not-quite sixth-graders, we enthusiastically chose the Even Worse idea of referring to these teams as the “Honkies” and the “N–rs.”

The game lasted about two minutes, just long enough for the joyful sounds of children at play to reach the ears of Mrs. Washington inside. She came barreling out of the house wielding a wooden spoon, spitting fire. “WHAT DID I JUST HEAR YOU SAY!?!” She spake as one who had authority, and we were sore afraid.

“If I ever hear any of you children use words like that again …” the threats and promises that followed were many and varied and severe. They were also effective. We weren’t really afraid of those threats though, or of that spoon. We were just ashamed because we’d upset and disappointed Mrs. Washington and Mrs. Washington’s disappointment was a tangible, awful thing to experience.

I wish I could recall precisely what it was that she said to us that day, but all I really remember was the urgent, emphatic ferocity of her lecture. Whatever words she used, what we learned was that this mattered. A lot. That it was important.

She never would hear any of us children use words like that again.

(This trip down memory lane comes via columnist Nicole Chung’s wise response to a parent, “My Son Is Bullying His Asian Classmate About the Pandemic.” I don’t think my story has anything to add to Chung’s advice, but I’ve shared it here because it’s my story, and because it’s a chilly day in mid-March when baseball seems tantalizingly close but still frustratingly far away.)