• Let me express huge, heartfelt thanks to everyone who contributed to support this blog in recent days. You folks are awesome.

• I’ve sometimes been told that I’m too critical of American Christianity and that I never seem to have anything positive to say about the church.

So, OK, here you go: Bethlehem Evangelical Lutheran Church of Los Alamos, New Mexico, is hosting socially distanced outdoor movie nights for free. They’re showing Spider-Man: Into the Spiderverse this weekend and following that up with The Princess Bride in two weeks.

• Several people have asked me about this even though, A) Lackawanna County is several hours from here, and B) the lumber aisle is all the way on the other side of the store. But in any case, yes, I saw this: “Police respond to report of exorcism at Dickson City Home Depot.”

The exorcism in this case was for trees and it took place in Dickson City at the Commerce Boulevard Home Depot. Dickson City Police responded to a call of “bad behavior” occurring in the lumber aisle.

Police escorted the people out of the store without incident. No charges have been filed at this time.

No one has ever attempted to perform any exorcisms on the lumber at the Big Box where I work. On the plus side, that means you won’t have to put up with this kind of “bad behavior” at our store. On the minus side, that also means we can make no guarantees about any of the lumber we sell being possession-free.

On my side of the building — where the plants are still alive — I’ve never encountered any customers asking about plant exorcisms, but I do frequently recommend anointing them with (neem) oil.

• Speaking of exorcisms, here’s a fun piece from Eric Harrelson and Joseph P. Laycock, “Will ‘Conjuring 3’ Influence Real-Life Events via the ‘Exorcist Effect’?”

I’ve written quite a bit here about the “Exorcist Effect,” although I never knew to call it that. Harrelson and Laycock describe it this way:

This is a cycle in which horror films based on true events come to shape the way we interpret the world; this leads to more reports of paranormal experiences, which become fodder for more horror films. It’s an endless mobius strip where the line between film and history becomes increasingly blurred.

Pop theology inspires pop culture, which shapes and reshapes pop theology until, eventually, pop culture even alters orthodox theology. This is, for example, where the supposed “doctrine of Hell” comes from. It’s 99% constructed from pop culture. (Dante was high culture, but he was also popular. Tundal and the Gospel of Nicodemus were pure B-movie pop.) 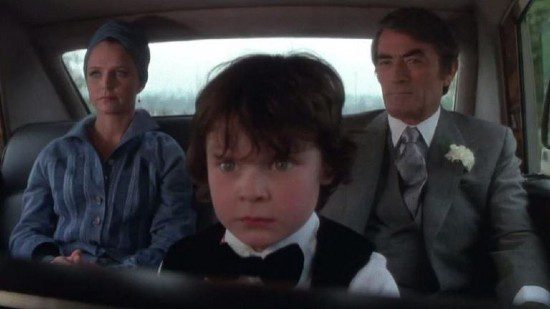 “Bible prophecy scholars” had been Antichrist-hunting for generations before Hollywood producer Harvey Bernhard realized that premillennial dispensationalist folklore might make a good movie. (He had an evangelical Christian friend who “witnessed” to him after reading a bunch of Hal Lindsey’s books. Bernhard wasn’t converted, but he was inspired.) He hired David Seltzer to write the script and Richard Donner to direct, and The Omen turned out to be one of the biggest box-office hits of 1976.

Most good Rapture Christians never saw The Omen, an R-rated horror movie. But it seeped out into pop culture, contributing to the folklore and, thus, changing the folklore. And within a few years the sermons and books and videotapes of many “Bible prophecy” preachers included elements derived not from Scofield or Lindsey, but from The Omen. Many of those preachers wouldn’t have known that’s where those story elements came from (let alone the way Seltzer borrowed some of them from Rosemary’s Baby). All they knew was that these new twists and flourishes made the story more compelling.

Harrelson and Laycock note that the latest movie in the supernatural horror Conjuring series “is a visual homage to The Exorcist,” even recreating “the shot where a priest exits a cab and stares up at a foreboding dark house.” But they also describe how the “Exorcist Effect” in popular culture shaped the actual career of Ed and Lorraine Warren, the self-described “demonologists” who found a way to make a living thanks to the explosion of interest in demonic possession that followed William Friedkin’s 1973 horror classic. The Warrens’ exploits/grift then provided the “based on a true story” premise for The Conjuring series. The exorcisms described in the Warrens’ memoirs and portrayed in the movies seem “realistic” to viewers because they’re derived from the same source as those viewers’ understanding of a “realistic” exorcism — i.e., from The Exorcist.

Harrelson and Laycock argue that this cycle will continue, given new momentum by the popularity of The Conjuring series. Pop culture reshapes pop theology which inspires another round of pop culture. And before you know it, there’s “bad behavior” in the lumber aisle.

• This story by Sam Biddle at the Intercept is thoroughly researched, darkly hilarious, and yet still generously compassionate toward its various subjects: “The Future Dystopic Hellscape Is Upon Us: The Rise and Fall of the Ultimate Doomsday Prepper.”

It’s the saga of Barrett Moore, a wealthy, gun-loving, ex-mercenary “prepper” and also a con-artist who reminds me a bit of John G. Bennett Jr. Bennett ran the massive Foundation for New Era Philanthropy Ponzi scheme in the ’90s and yet, even after a long stint in prison for money-laundering and fraud, he never seemed to fully appreciate that he was running a scam and ripping people off. Moore has that same delusional, high-on-his-own-supply enthusiasm for his scheme.

That scheme involved a Michigan-based facility where the ultra-wealthy would be able to ride out any coming apocalypse or revolution in luxurious style. He seems to have oversold both the actual and the potential reality of the site, which is apparently mostly just an arsenal of guns in a fortified barn. This has upset some of his former investors and subscribers — fellow wealthy white gun-enthusiasts who’ve forked over hundreds of thousands of dollars for what they were told would be luxury cabins on Moore’s imaginary version of Noah’s Ark.

If this sounds a bit like an old episode of Elementary, that’s because it is. But it’s also a lot more than that. Biddle’s account of the whole sordid affair makes for a great read. Go enjoy the whole thing.

• Today is Linda Ronstadt’s birthday, so here she is with one of my favorites (and the source of this post’s title) from her delightful turn on The Muppet Show.

July 16, 2021 The one-way ratchet of the Leopards Eating People's Faces Party
Recent Comments
0 | Leave a Comment
Browse Our Archives
get the latest from
slacktivist
Sign up for our newsletter
POPULAR AT PATHEOS Progressive Christian
1