Due South and Ted Lasso: It’s not about the fish

I didn’t find the clip from Slings and Arrows I was looking for and wound up, instead, re-watching the pilot episode of Due South, nearly 30 years after it first aired.

That show was endearing, if sometimes kind of a mess. It’s the story of Benton Fraser, a young, unfailingly virtuous Mountie from the Northwest Territories who winds up in Chicago seeking the men who murdered his father. Sometimes it was a fish-out-of-water story, sometimes a buddy-cop movie, and sometimes a superhero story (the protagonist’s super power being that he was Canadian). 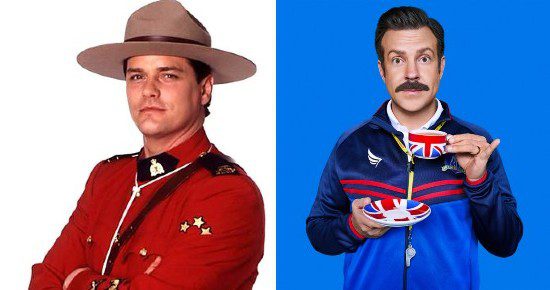 There’s a scene at the end of that pilot episode that shows why when this story worked, it really worked well. Early on we see Paul Gross — pitch-perfect and wholly committed to the role — arriving at O’Hare airport as an innocent abroad. He’s clearly overwhelmed by his first trip to the Big City. It’s a long, funny sequence that has viewers wondering how he’ll survive. If he doesn’t learn to adapt, we fear, then this city is going to eat him alive. But at the same time we don’t want to see him adapt — we don’t want to see him become more like the callous, competitive new world he’s stepping into. Fraser is good, honest, sincere, trusting, and unfailingly respectful to everyone he meets. We don’t want him to change, but we’re worried he’ll have to.

At one point in that airport scene, Fraser encounters a shady looking panhandler, and he’s completely taken in by the guy’s shtick. Wholly trustful of strangers, and bewildered by the concept of “medical expenses” for a sick child, the naive Mountie agrees to “lend” the man $100, accepting the panhandler’s dubious promise that it will be repaid within one week. The panhandler — shocked by how easy this seems — says “You’re gonna give a perfect stranger $100? You’re kidding!”

“I never kid about a child’s life,” Fraser responds, earnestly. It’s a little character note we’ve all but forgotten about by the end of the show, after Frasier has brought his father’s killers to justice and the plot has contrived to keep him in Chicago, working alongside the cynical American cop who will serve as his partner and opposite, solving new crimes every week, etc.

The pilot ends the way many network TV pilots end, with a long expository description of the show’s premise. That duty falls to David Marciano’s Chicago cop character here, who’s tasked with summarizing that premise for viewers in language as explicit as a TV Guide listing. This is one-sided conversation as he’s explaining all of this to his partner and opposite, Fraser, who is standing at attention at his post in front of the Canadian consulate, unspeaking and unblinking in his crisp, formal dress uniform.

But as Marciano is talking, a figure walks up behind him. It takes a second to recognize him, because the guy is cleaner and slightly better dressed than he’d been when we first saw him back at the beginning of the show. It’s the panhandler from the airport. He hands Marciano some money and says, “When he gets off work could you give him this? It’s the $100 he lent me.”

That’s delightful, and not just because it’s the payoff and long-delayed punchline to a joke we’d forgotten about. It works because — even more than Marciano’s monologue — it tells us what this story is going to be about. It’s not about whether or how this backwoods Mountie will change and adapt to the cruel Big City, but about how that cruel Big City is going to have to change and adapt to him.

This isn’t how most “fish-out-of-water” stories work. Most of the time, they’re about the fish — the protagonist who suddenly winds up in a strange new environment that forces them to make new choices and adapt to their new circumstances. The “fish” will have to change and the fish will have to choose.

But sometimes — as in Due South and Ted Lasso — it’s not about the fish. They are who they are and what they are, no matter their circumstances or where they wind up. The most interesting choices and changes in their stories don’t involve them, because they’ve already chosen who they will always be and (therefore) we don’t want them to change. So the really interesting choices and changes in such stories involve everyone else. That’s where the suspense comes in  — not from the moral conflicts of our heroes, but from everyone else encountering the conundrum of someone who seems completely and bewilderingly unconflicted.

This is something like the suspense that drives High Noon. And Blazing Saddles, too, in which the people of Rock Ridge surprise us by coming around and coming together in precisely the way the people of Hadleyville all failed to do. That’s why the ending of Blazing Saddles is so much more satisfying than the ending of High Noon. Sure, Gary Cooper and Grace Kelly triumph and prove themselves to be heroes, but so what? We already knew that. The real sense of triumph comes from watching a bunch of previously awful “common clay of the new west” types rise to the occasion by choosing to be better people.

Due South and Ted Lasso both sometimes shift their focus back to the fish, wanting I suppose to show that their protagonists are more relatably human, conflicted and fallible, just like the rest of us. This seems like a stumble because that’s not what we really want from these stories. We don’t want to be shown that these oddball embodiments of virtue can be more like us, we want to be shown that we can be more like them. We want to be reminded that such an option is possible, and survivable, even if it makes us as vulnerable as fish out of water.

* Due South is worth revisiting as a relic of the early 1990s. The show premiered in 1994 but it’s striking how much of it looks what we think of nowadays as “1980s” fashions. Everywhere you look there are Just Shirts, Miami Vice jackets, big hair, and shoulder pads.

The most ’90s thing about the show is the hero’s name: Benton Fraser, which was confusingly close to Brandon Fraser, star of several popular movies that came out just before Due South’s 1994 premiere. The fictional Fraser made his last appearance on TV in the spring of 1999. In August of that year, Jay Ward’s cartoon Mountie, Dudley Do-Right, arrived in a live-action movie starring … Brendan Fraser.