I suppose Art Bell also deserves a share of the blame for the sorry state of American epistemology. He was the king of “alternative facts” and fake news long before those became infamous buzzwords. But Bell rarely seemed to have weaponized them or monetized them. Coast To Coast may have been a cornucopia of bad science, but not of bad faith. 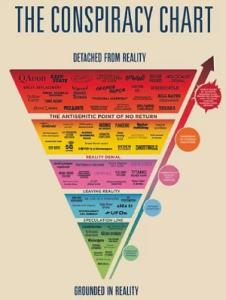 Consider that while Art Bell ruled the AM dial in the middle of the night, it belonged to Rush Limbaugh during the middle of the day. Limbaugh and his many imitators made their fortune bearing false witness against their neighbors. Bell’s witness, and that of his callers, may have been unreliable, but it wasn’t being borne against anybody. That matters.

It matters ethically, I think, but it also matters artistically. Because Bell wasn’t interested in weaponizing conspiracy theories, they were allowed to roam free and might wind up anywhere — aliens, ghosts, astral projection, Nbiru, Chthulhu, bigfoot. That kept things surprising and interesting, potentially clever or delightful. Once anyone seeks to weaponize conspiracy theories in service of an agenda it forces them, inevitably, to arrive at the same place they all eventually arrive: Satanic baby-killers. That’s never clever or surprising or interesting. It’s dull and stale and the opposite of creative or delightful.

Granted, this aesthetic consideration is far, far less important than the ethical concern. The disease of “Satanic baby-killers” is a prideful, corrosive rot that rationalizes violence against the Other. If unchecked, it is the process that will — as Lewis said — “make us into devils … fixed forever in a universe of pure hatred.” That form of weaponized conspiracy thinking leads, ultimately, to support for or acceptance of genocide, and that is immeasurably more important than any aesthetic complaints about it also being stupefyingly dull and dumb.

This distinction — good faith crackpottery vs. weaponized bad faith conspiracy theories — helps to clarify why we’re able to think fondly of Art Bell in a way that no one will ever think fondly of, say, 8chan. The latter is relentlessly malicious. Bell wasn’t. He famously did not screen his callers before allowing them on the air and was genially receptive to almost any point of view that any of them might feel the need to express, but his forum wasn’t receptive to malice and so the malicious weren’t rushing to seek it out.

That accounts, I think, for the most remarkable fact about Bell’s long history as a platform for conspiracy theories and alternate views of reality: his show did not gallop off into racism and anti-Semitism. It wasn’t taken over by the propagandists of hate spewing their poisonous nonsense about international Jewish conspiracies (Soros!). I can’t claim anything like a comprehensive, encyclopedic knowledge of Bell’s history on Coast To Coast, but from the many hours I heard of it, the anti-Semites and witch-sniffers who almost always wind up taking over any forum for conspiracy thinking seemed unable to gain a toehold in Bell’s world.

That’s impressive. We can’t say the same thing of, for example, Pat Robertson, or of most of his colleagues in the white evangelical religious right.