It seems actor Ben Affleck was reluctant to have his slave-keeping ancestor discussed when he appeared on Henry Louis Gates’ PBS show Finding Your Roots.

That reluctance is a problem because denying the past is a way of denying the present. And because it reflects Old World superstition about “blood will out” and such that suggests heredity is destiny. For those of us from northern states — like Affleck, or me — such a refusal to acknowledge historic complicity in the evil of slavery can also feed into a cartoonish South-bad, North-good view that evades responsibility by evading guilt. 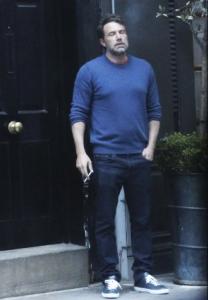 My family is from New Jersey. Richard Clark(e) settled in what would later become Union County in 1640, and that’s where I was born. (We Clarks missed the memo on that whole “westward, ho!” business. Took us nearly 350 years to cross the Delaware River.) So my family isn’t southern — we’re not even from South Jersey.

But Richard Clark kept a woman as a slave — just like Jonathan Edwards and Ariel Castro did. My great, great, etc., granddad’s, will includes “a negress” among his “property.”

That’s the actual history of my family and the actual history of New Jersey — where slavery was perfectly legal for more than 200 years. The state passed a gradual abolition in 1804, but still permitted the enslavement of those born before that year. A generation later, in 1846 — the same year Abraham Lincoln was elected to Congress — New Jersey nominally “ended” slavery by reclassifying former slaves as indentured “apprentices” for life.

Slavery in New Jersey didn’t really end until the 13th Amendment was adopted after the Civil War. And even then it took two tries and more than a year for the state to ratify the 13th Amendment (which it did after Georgia, North Carolina, South Caroina, Alabama, Arkansas, Tennessee and Louisiana had already done so).

That’s why it’s good to see that New York City will soon be erecting a historical marker on Wall Street near the site of the official slave auction that the city operated there from 1711 to 1762. (New York didn’t pass it’s gradual emancipation law until 1827. Slavery was legal in the Big Apple for longer than it has been illegal there.)

Mary Elizabeth Williams suggests that Ben Affleck — and the rest of us — should take a cue from his fellow actor/director Bill Paxton, who recently appeared on TLC’s knock-off version of Gates’ show, Who Do You Think You Are? When Paxton learned of his ancestor’s slave-keeping, he said it was “disappointing,” but that “Your history, good and bad, is your history.” …

I prefer the name of Gates’ program because “Finding Your Roots” can be enlightening. But ancestry is not destiny. It does not define who we are. Our history, good and bad, is our history, but it need not determine our future.

… That’s why I can also tell you about another (less-direct) ancestor of mine without any sense of personal shame or guilt. William Potter was hanged in 1662, in Connecticut, for “the sin of bestiality with sundrie creatures.” We have a record of his trial, which included a startlingly detailed tally of Potter’s crimes:

He acted first with a bitch, which he hanged thinking he should be free from the temptation when she was gone, but it still pursued him, & he acted this wickednes with two sowes, one of which was that of which his son testifies, there is alsoe a yeareling heifer, a two yeare old, and a cow that he had beene vilely naught withall this spring, alsoe three sheepe, of which he said he told his wife which they were; these was all he said, only his attempting with his old mare which is now dead.

Given the way genealogy works, pretty much any white American family that’s been here for centuries will be linked in some way, with some degree of cousinhood or kinship, to the family of William Potter. He is thus my go-to reference in response to the Mayflower business Williams mentions above.

“My family came over on the Mayflower.”

“Oh, then you must be related to William Potter.”