So this was waiting for parents, aunts and uncles, on every seat of a local Catholic-school, eighth-grade graduation ceremony this week: 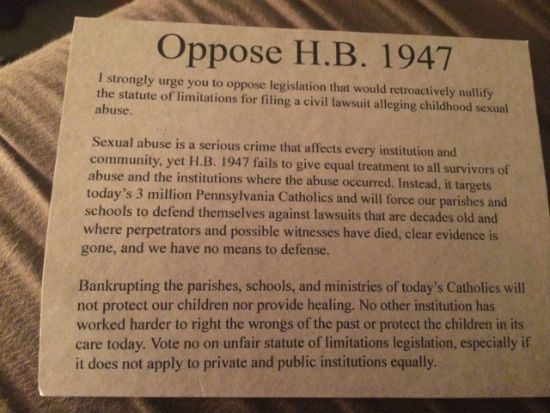 This is, quite simply, reprehensible.

I understand why these school officials, along with the entire Catholic Diocese of Philadelphia, are doing this. To be clear, they’re not fighting to make it harder to prosecute criminals who prey on children because they like criminals who prey on children. They’re not fighting to create a context in which more children will be sexually assaulted and abused because they want that to happen. But they’re still working to make that happen. They’re still taking sides with sexual predators and taking sides against the protection of Pennsylvania’s children.

The financial pressure leading these school officials to undertake this loathsome lobbying effort is real and intense. The school and the diocese say this is a matter of survival. And I do have sympathy for some devoted schoolteacher or Catholic charity worker whose funding is now jeopardized because the bishops spent decades covering up for predatory priests those teachers and charity workers never met or even heard of. But there are other legislative lifelines to reach for — other approaches to ensuring their financial survival that don’t involve linking their own fate to legal immunity for future sexual predators.

Accompanying these postcards were letters from Archbishop Charles Chaput, repeating his false claim that HB 1947 targets his church while exempting public institutions. As Republican state Rep. Nick Maccarelli wrote in response to that claim: “Google ‘Jerry Sandusky Penn State Lawsuit’ if you need to see evidence that public institutions can be sued. What this bill did was to expand the statute of limitations for claims of child molestation. Put simply, it allows those people who are raped as children more time to face those who raped them.”

Go to the Philadelphia Archdiocese website, and you’ll immediately be confronted by a pop-up: “Click here to send a message to your legislator opposing HB 1947.”

We are in the midst of a broad Catholic Church lobbying campaign to squash House Bill 1947, which passed the House in April and would eliminate the statute of limitations for criminal cases of child sexual abuse and extend the statute for civil cases until the victim reaches age 50, retroactively, from the present age 30.

… Philadelphia Archbishop Charles Chaput and others have been encouraging Catholic pastors to read or distribute lobbying materials at their church services.

White notes that Catholic schools in the diocese have been distributing those lobbying materials — including the postcard above — to the parents of children throughout the area. He quotes an email from one such parent, Gretchen Dahlkemper of South Philly, and I’ll let her have the last word here:

I am horrified, disgusted, and sick to my stomach that the Archdiocese of Philadelphia instructed its principals to send the below information to the parents who have chosen to send our children to receive a Catholic education. I send my 7-year-old boy each day to the school expecting the principal and the teachers to protect him and guide him — not to shield the pedophiles that were for decades abusing boys, just like my 7-year-old, with the protection and systematic collusion of the Catholic Church.

… The systematic cover-up of the Church continues today and that Archbishop Chaput is continuing the Catholic tradition of putting pedophiles before our children.

That 6-year-old story seemed timely just now due to the recent report on the cover-up of sex abuse in the Southern Baptist Convention and due to this current story in which the same Catholic bishops exposed in their church’s decades-long scandal involving the abuse of children still presume to regard themselves and to be regarded by others as the arbiters and defenders of morality.