• Katelyn Beaty for RNS, “NDAs are a tool for toxic church cultures.”

Beaty asks the key question — “Are there legitimate reasons for churches to use NDAs?” The short answer, ultimately, is “No.”

“Nondisclosure agreements” can be legitimate tools for companies/employers that need to protect trade secrets from their competitors. But churches shouldn’t have proprietary trade secrets. Kentucky Fried Chicken may have its Top Secret list of “11 herbs and spices” tucked away in a vault somewhere to prevent competitors from producing knock-offs of its recipe, but there shouldn’t be anything analogous to that in the “business model” of local churches or denominations. The whole point of churches is supposed to be to share their “secret recipes” as widely as possible.

So the use of NDAs by churches is inherently suspicious. It is a public statement that says, “We have secrets we don’t want you to know.” The best case scenario there is that these are somehow good secrets, which means the best possible defense of these NDAs is something like “We’re keeping the good stuff for ourselves” and that’s not, itself, very good.

This is why we don’t — and can’t — trust Scientology. It insists it’s a “church,” but it’s based on a set of fiercely protected proprietary “trade secrets.” I’m not an admirer of white evangelical “proclamation evangelism” because, like they say in writing and acting workshops, “Show; don’t tell.” But at least proclamation evangelists and proselytizers passing out tracts on the sidewalk are in the business of “telling” rather than selling, which would seem to be the business model of any “church” that requires NDAs to protect its secrets.

“Wanna know a secret?” Sure.

Why would any church want or need to have and to enforce NDAs? What’s the supposed benefit that might outweigh the fact that such churches are, essentially, hanging giant banners that read “We’re suspicious and kind of shady and don’t want you prying into our secrets”?

Well, as Beaty shows, it’s usually because they’re a useful tool for covering up scandals involving abuse or financial shenanigans. Churches that use NDAs should be presumed guilty unless otherwise, somehow, proven innocent.

• And speaking of P.T. Barnum’s business model: “‘They Will Have To Kill Me First,’ Promises Steve Bannon, Just Hours Before Surrender To NY Prosecutors.”

As Liz Dye writes there, Bannon’s (alleged) scam was pretty straightforward and he and his partners barely worked to cover it up. Prosecutors have texts detailing their gleeful execution of this theft-by-fraud scheme. They had lists of Trump supporters who they knew enthusiastically supported the idea of building a 2,000-mile physical “wall” along America’s southern border. They told these Trump supporters that any money they donated would be used to build this wall. The money poured in, they kept it themselves, and never built or — apparently — even intended to build a single mile of that wall.

If the evidence is what prosecutors say it is, then Bannon and his partners have clearly violated the law. They’ve stolen money from their donors under false pretenses in a crude, inelegant variation of a Tin Man scheme.

But the remarkable thing about this brazen con is that Bannon’s victims don’t seem to be upset about it. They got ripped off. They wrote checks and got nothing in return. The wall they wanted to help build didn’t get built. Steve Bannon pocketed their money and sailed off to party on one of his yachts, chuckling at the suckers paying for his lavish lifestyle, and none of that seems to bother them.

I suppose that’s because they already received the only thing they were seeking in exchange for those donations — a symbolic affirmation of their support for a symbolic representation of their ethno-nationalist sentiment.

• Archaeology =/= “proof-digging.” Nadya Williams reflects on the ways ideology colors the study of the past in the Holy Land. This includes the unavoidable, but usually unmentionable, observation about the relationship between modern Israel and the Palestinian people: “This view, after all, is how the Native Americans lost their lands to, well, people like us.”

• Here’s a fun discussion of a fascinating subject for speculation: “One cosmic incarnation or (very, very) many?”

Jonathan MS Pearce’s framing of this question mirrors that of most white evangelicals in that he treats the incarnation as exclusively a matter of atonement. That transforms the question into one of the mechanics of atonement, which tends to be far more speculative and less interesting than any discussion of extra-terrestrial intelligence. (I used to think theories of atonement might matter a bit in that they seemed to influence the behavior and character of the believers who subscribe to them, but then I eventually realized that the influence flowed the other way — with behavior and character determining which theory of the mechanics of atonement believers consequently prefer — and that freed up a lot of otherwise wasted time.)

Once one allows that incarnation isn’t exclusively a matter of atonement then the “very, very many” side of this speculative debate seems likelier. But what does the Bible say? That’s not a pertinent question here. The Bible of the humans from Earth is about the business of the humans from Earth and thus shouldn’t be expected to have much to say about those not in that category.

Here, again, I’d point out that this is true even within our parochial terrestrial context. I made eye contact yesterday with one of our neighborhood foxes, one of those moments that underscores both our kinship and our vast difference. Our Bible is not her Bible and whatever Bible she may have would be incomprehensible to me. But the God I believe in is her God too. And should God not have concern for her great city and also many cattle?

That last bit is borrowed from the book of Jonah, the story of a bitter, exclusive prophet who is miserable and aggrieved because everywhere he goes, despite his best efforts, heathens and outsiders are repenting and being embraced by God with the same love and mercy God has for him. The author of the book of Jonah — unlike Jonah himself — believed that God’s promises to Abraham were meant to be expanded and extended to all of humanity. That suggests another fun (and wildly speculative) conversation might be had involving the question “One cosmic Abraham or (very, very) many?”

During one of the many previous times we visited these questions here I posted this wonderful illustration from Eric Wilkerson, “The Missionary Seeks an Alien Convert”: 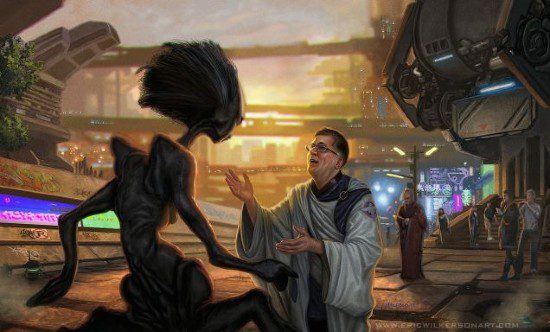 Given Pearce’s “how many incarnations” question, I’m now imagining a different conversation here:

“So we believe that God became incarnate …”
“Yes! That’s what we believe too!”
“… and that God was born among us and lived a life of perfect love …”
“Yes! Same! God was born as one of us and lived among us, teaching and healing.”
“Yes, and then he was crucified and …”
“Wait … what?!?”
“Oh, yes. We killed God. Tortured him to death in the most brutal way we could imagine. So, anyway …”