The specific context for this post was something Donald Trump Jr. said that was cruel, evil, selfish, and stunted. That was six years ago, of course, and since then he and his father have said and done so many cruel, evil, selfish, stunted things that you may have lost track of this specific one, so here’s a refresher: “Donald Trump Jr compares Syrian refugees to Skittles.”

“Religion that is pure and undefiled before God, the Father, is this: to care for orphans and widows in their distress, and to keep oneself unstained by the world.” — James 1:27

It seems that James the Just is being unfair. He’s telling us to keep “pure and undefiled” and “unstained by the world.” But then he’s also telling us to be tangibly present in the world — to “care for orphans and widows in their distress.” Seems like a contradiction.

Just try to “care for orphans” while not getting at least a little bit dirty. Kids are a mess. And widows? Well, now you’re talking about single women. Care for them and tongues will wag — people will start to talk and to speculate and soon your reputation will be anything but pure, undefiled, and unstained.

If we have to incur such a risk to deal with these worldly orphans and widows, then the safest course would seem to be to keep them at arm’s length. Otherwise their distress is going to become yours — it’s going to get all over you. So if you’re going to care for them, you’ll want to do it from a safe distance. Maybe set up some intermediaries and then write a check.

Even then, though, there’s no guarantee you’ll be able to maintain your undefiled purity while caring for these dangerous orphans and widows. Caring for them means accepting responsibility for them, and responsibility always entails the possibility of incurring guilt. What if one of these orphans you’re caring for grows up to become a criminal? Congratulations — you’re now responsible for that. You are thereby impure and defiled. Any one of those widows might do … well, almost anything really, and that would all come back to reflect on you.

Look, we’re called to be holy as God is holy. And how does God maintain God’s divine holiness? By avoiding the world — staying apart from it up there in Heaven and not rushing down here to risk getting stained and defiled by us filthy humans.

To understand what’s at risk here, let’s think of all those worldly orphans and widows you might be caring for as — oh, I don’t know, let’s say a big bowl of Skittles: 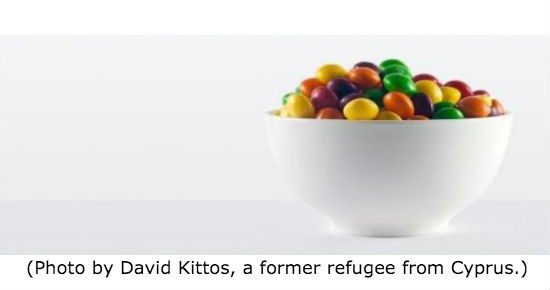 Each of those Skittles represents one orphan or widow — most of which you can probably safely eat/care for without their distress completely soiling and staining your otherwise pure and undefiled religion. But three of them — and you can’t know which ones — are actually deadly poison. Eat them and you will die!

Do you see what’s at stake here? Can you really afford to risk having your pure and undefiled religion getting indelibly stained by these filthy, worldly orphans and widows?

Purity is the main thing here, after all — retaining the unsullied perfection of our undefiled religion. The whole orphans and widows bit is really just thrown in there as an afterthought for those who feel kind of weird just sitting around, avoiding the world, stayin’ pure and undefiled. But clearly it’s optional. Extra-credit, maybe, but not required. The emphasis is all on being spotless and stainless when we stand before God, who is, of course, a harsh judge who reaps where he did not sow and gathers where he did not scatter seed. Best to err on the side of safety, purity, and shutting out the defiling world.

Sure, there are liberals out there who see this verse differently. Those liberals refuse to see the obvious contradiction in this verse — they refuse to recognize that these biblical commands are irreconcilably at odds with each other, and that we have to choose one or the other.

So those liberals will try to say that being defiled and stained by “the world” doesn’t mean avoiding the world around us, building walls and hiding from our unclean, unsafe, and probably poisonous neighbors. They’ll try to confuse the issue by pointing out that “God so loved the world” — like we’re the ones who don’t understand John 3:16! (As if we didn’t understand our own bumper-stickers and temporary tattoos!) They’ll go on about how what James means here by “the world” is what Paul talks about when he says “our struggle is not against enemies of blood and flesh, but against the rulers, against the authorities, against the cosmic powers of this present darkness.”

It’s like these liberals refuse to understand that “the world” James is talking about — the big, scary, dirty, poisoned-candy world all around us — is obviously the blood-and-flesh orphans and widows and neighbors our pure religion requires us to keep at bay.

They’ll even go so far as to insist that this sentence from James makes sense — that he’s presenting a coherent, single thought rather than an obviously impossible contradiction. They’ll argue that what James is really saying is that the definition of purity, of being undefiled and unstained by the world, is being the kind of people who care for orphans and widows in their distress. They’ll try to make it out as though James is actually telling us to do that — like he thinks caring for poisonous orphans and filthy widows is some kind of good thing that pleases God.