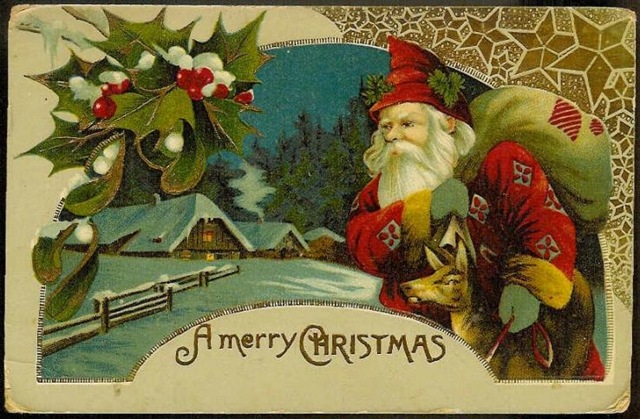 I love G.K. Chesterton’s take on Santa Claus. I wrote this blog post a couple years ago about my daughter, fairy tales, and why I like Chesterton’s perspective so much:

Molly is three now, and her excitement over Christmas is infectious. She learned the Christmas story this year, mostly from her grandmother, who helped her make finger puppets of Jesus, Mary and Joseph, the shepherds, wise men, and the angel. A glittery horse and plastic monkey are the only animals in the manger. Molly is able to shoehorn Santa Claus into the incarnation somehow, but Kate and I don’t go out of our way to correct her. Some folks might cringe at that, but Molly is only three after all, and right now it’s enough for us that, in Molly’s heart, Christmas is a joyful mash-up of lights, trees, candy, music, presents, grandmothers, Santa and his reindeer, a baby king who was born in a barn, and the mommy and daddy who loved him.

I grew up on legends, myths, fairy tales, and fantasies: King Arthur, Robin Hood, Brothers Grimm, Hans Christian Andersen, Mother Goose, the Chronicles of Narnia, and of course Santa Claus. I’ve been fortunate that as an adult I’ve never felt the need to disavow these childish stories. I’ve actually added to them, picking up the Harry Potter series in my twenties, which is also when I finally committed myself to read the Lord of the Rings trilogy. Two of my favorite Christian writers – C.S. Lewis and G.K. Chesterton – wrote beautifully about how “faerie stories” prepared them for the gospel. Chesterton’s Orthodoxy is a great example, and a chapter from that book called “The Ethics of Elfland” is one of my favorite chapters in all of literature.

Chesterton saw the world differently than just about everyone else. He seemed to live in a state of inexhaustible wonder. It’s almost as if the scales had fallen from his eyes and he could see the heavenly realm co-mingling with the earthly. For him, the universe must have been like a string that vibrated with the paradox of Emmanuel, “God with us.” I recently discovered something Chesterton wrote about Santa Claus for the Tablet of London. It’s a beautiful piece of writing, and it confirmed for me that, amidst all the mistakes Kate and I make as parents, letting Molly keep Santa Claus is not one of them.

What has happened to me has been the very reverse of what appears to be the experience of most of my friends. Instead of dwindling to a point, Santa Claus has grown larger and larger in my life until he fills almost the whole of it. It happened in this way.

As a child I was faced with a phenomenon requiring explanation.  I hung up at the end of my bed an empty stocking, which in the morning became a full stocking.  I had done nothing to produce the things that filled it.  I had not worked for them, or made them or helped to make them.  I had not even been good – far from it.

Once I only thanked Santa Claus for a few dollars and crackers. Now, I thank him for stars and street faces, and wine and the great sea. Once I thought it delightful and astonishing to find a present so big that it only went halfway into the stocking.  Now I am delighted and astonished every morning to find a present so big that it takes two stockings to hold it, and then leaves a great deal outside; it is the large and preposterous present of myself, as to the origin of which I can offer no suggestion except that Santa Claus gave it to me in a fit of peculiarly fantastic goodwill.

December 31, 2012 Who Will You Grow Old With?
Recent Comments
0 | Leave a Comment
Browse Our Archives
Related posts from Slow Church 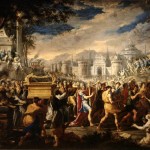 Progressive Christian
Three Ways We Can Foster Gratitude in Our...
Slow Church 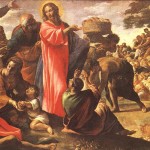 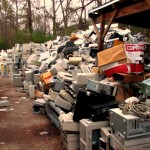