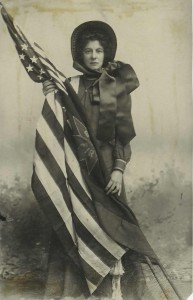 It’s Women’s History Month, so I’ve asked Priscilla Pope-Levison, author of the new book, Building the Old Time Religion: Women Evangelists in the Progressive Era (NYU Press, 2014) to contribute a couple of important posts. (I just happen to have an in with her!) Here is her first post, with a photo of Evangeline Booth, who was for 30 years commander of the Salvation Army in the USA.

Visit dusty archives around the country, even into Canada, and you’ll discover a slew of sermons, diaries, papers, and autobiographies of women evangelists, whose profound impact on American religion is now neatly boxed away on tidy—and more often untidy—shelves, from Oskaloosa, Iowa, to the farthest eastern tip of Nova Scotia. The women whose letters and papers you’ll find there are notably absent from the conventional history of American evangelism, which moves from Jonathan Edwards to Charles Finney to Dwight Moody to Billy Sunday to Billy Graham.

Two decades ago, as I did my class prep for an introductory lecture on American evangelism, resources by and about these men flooded my desk.  I began to ask a simple question: Were there any women? I wasn’t aware enough of any women evangelists to pose the question, “Where have all the women gone?” because I didn’t know if they were there in the first place. Twenty years later, I know. Yes, they were there, a whole army of them, like Evangeline Booth in this Salvation Army photo. Women weren’t just there, in fact; they were actually shaping American religion in profound and powerful ways, as they engaged in courageous social outreach, changed the shape of American politics, and attracted hundreds of thousands of devotees.

These women evangelists championed an intrepid humanitarianism. Sojourner Truth solicited aid for freed slaves living in squalid camps in the nation’s capital city. Phoebe Palmer began Five Points Mission, one of America’s first urban mission centers, in a New York City slum. Within two months after Aimee Semple McPherson’s Angelus Temple Free Dining Hall opened in 1931, its workers had already fed more than 80,000 hungry people, and the Angelus Temple Commissary, opened in 1927, was crucial to the survival of many in Los Angeles during the Depression. And their contribution to race relations? Women evangelists held integrated meetings—Jarena Lee, for example, whose audiences in the 1820s included “white and colored,” “slaves and the holders,” and “Indians.” This practice continued into the twentieth century, with Aimee Semple McPherson’s and Kathryn Kuhlman’s racially integrated services.

These women influenced the nation’s leaders, too. Harriet Livermore preached in Congress several times between 1827 and 1843 about the predicament of Native Americans. Sojourner Truth generated a petition and presented it to President Ulysses S. Grant, requesting that a colony for freed slaves be established in the western United States. Jennie Fowler Willing’s speech on women and temperance in 1874 prompted hearers to form the Woman’s Christian Temperance Union, the largest women’s organization in its day. Through her periodical, Woman’s Chains, Alma White supported the platform of the National Woman’s Party, including the Equal Rights Amendment. And Aimee Semple McPherson marshaled her vast number of followers to help defeat Upton Sinclair in his 1934 bid to become California’s governor because, she claimed – albeit mistakenly – that he would introduce Communist and anti-Christian legislature in the state.

These women preached to audiences often numbering in the thousands. During her 1889 Oakland revival, Maria Woodworth-Etter repeatedly packed to capacity her 8000-seat tent. Aimee Semple McPherson’s church in Los Angeles, Angelus Temple, boasted a 5300-seat auditorium, which filled up three times for Sunday services. Crowds for the weekly healing service stood in long lines, waiting for an open seat in the auditorium. At the age of fourteen, Uldine Utley preached on Halloween night in Madison Square Garden in 1926 to a crowd of 14,000. This service marked the end of her four-week, two-sermons-a-day evangelistic campaign in New York City. Numbers are impossible to gauge for Kathryn Kuhlman’s radio program, “Heart-to-Heart,” broadcast regularly for over 40 years, or her long-running CBS television program, “I Believe in Miracles.”

I no longer ask the question, Were there any women? Nor do I ask, Where have all the women gone? Now I know, at least in part. They’ve underwritten the legacy of American religion, which, until now, has been overwritten by the lives and legacy of their male counterparts. No more, however. It is time to write women evangelists into the history of American religion because our take on American religion is different—changed—by their ubiquitous presence, their bold initiatives, their fascinating personalities.

Photo of Evangeline Booth courtesy of the Salvation Army archives. 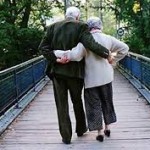 February 14, 2014
Some Pretty Good Advice from Ecclesiastes for Valentine's--and Every Other--Day
Next Post 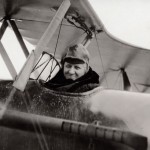