In The Beginning: A Note to Myself

In The Beginning: A Note to Myself January 17, 2014 Rabia Chaudry

The great thing about writing your first blog post is that you can be assured that almost no one will read it.  Except for your own lonesome self. Repeatedly.  Because it better be perfect for you.

My poor editor waited patiently for near 100 days as I hemmed and hawed over naming this blog.  It didn’t come easy to me, because dammit a permanent title needs to be profound, mysterious, just a little cliched but not too cheesy, and reflect the depths of the blogger’s soul.  Amiright?  So in the end “Split the Moon” won out over such gems as “Rabia’s Jihad”, “The Veiled Aunty, Exotic”, “Life is a Bag of Samosas”, and “No Love Like Cat Love”.  The rich promise of such titles is alluring, but don’t lament, future blog posts will probably cover all these subjects. 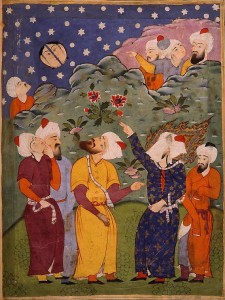 For folks who may not get the reference, split the moon refers to a story in the life of the Prophet Muhammad*, to whom doubters had posed a challenge.  They demanded evidence of his Prophethood in miracle form.  It’s narrated that the Prophet pointed to the full moon, which split in two through the permission of God.  Accounts say that after witnessing this, the skeptics accused the Prophet of magic or sorcery, which triggered this Quranic revelation:

“The hour drew nigh and the moon did rend asunder. And if they see a miracle they turn aside and say: Transient magic.” (Quran 54:1-2)

Of course there are plenty of theories about the event – it was an illusion, there was some sort of celestial interference that made the moon look like two halves, it’s allegorical and not literal.  But with stories of such events, what I’ve come to realize is the actual facts of the matter mean very little. What really happened is insignificant.  The real question is why any story is part of our tradition and what lessons are we supposed to take from it?

I take two lessons from this story: always be prepared to prove your mettle, and even when you do, haters will hate.  What reason was there for the Prophet* to go through the trouble of performing a miracle when it didn’t convince his critics anyway?  His followers already believed in his prophethood.  They weren’t served in any way through the miracle.  The Quran and the character of the Prophet* had already convinced them. The lesson here for me is that regardless of whether heavenly hosts are supporting you, you still have to do your best in this world, walk the talk, even respond to critics, but realize that there will always be critics. And that’s ok.  Do your best and leave the results with God.

So here I am, trying to split many, many moons.  Like everyone else.  It’s both a very short and very long life. Finding purpose, making a difference in the world, paying our dues, raising kids, supporting friends, being someone’s better half, caring for our parents, going above and beyond our responsibilities, living and hoping to die well, being faithful to the Creator and created, just getting through it all with dignity and hope for eternal Grace. These are the miracles of the common man. These are our moons to split, and split them we must.

With this, bismillah.  I plan to write a few times a month, and I can assure you the subject matter will be erratic.  I juggle many moons, from national security to immigration, from fluffy cats to faith, from gender relations to food – like the average internet-addicted person, my attention is on way too many unrelated things.

*It’s the tradition of Muslims to say “peace be upon him” after any mention of the Prophet Muhammad. We also send blessings after mentioning any Prophet, including but not limited to Adam, Moses, Abraham, and Jesus, may God be pleased with them all. Muslims, when you read this post and see an asterisk, say it. In your heart or out loud, just say it.  Those of the not-Muslim persuasion can say it too.  Ain’t nothing wrong with that.

January 20, 2014 "These Birds Walk" Soars
Recent Comments
0 | Leave a Comment
Browse Our Archives
get the latest from
Muslim
Sign up for our newsletter
POPULAR AT PATHEOS Muslim
1

Reflections on the Danish cartoons a...
Akram's Razor
Related posts from Split the Moon