By now it should be crystal clear that very little is crystal clear in this case. Something else that should be clear is that almost any set of facts or perceptions about Adnan can work for or against him. Examples:

I was as disappointed as you.  In the midst of all of his penis wagging, I really thought a connection between him and Jay would emerge.  I’m not privy to Sarah or the Serial team’s investigation, and I don’t know all they’ve uncovered, so I was breathlessly hoping (as has been my theory) that Mr. S. was somehow tied to Jay. Because from all accounts, that would be the only explanation of how he found Hae’s body.  He was actually looking for it. When you have seasoned crime scene folks who can’t see the body as they’re actually standing right above it, call me crazy to be skeptical that Mr. S just stumbled across it.  And I’m still not willing to let him off that easy.  The show mentioned that Mr. S failed the first polygraph and passed the second. What the podcast failed to mention, other than in passing, was that the questions in the first and second polygraph were very very different. Here are the questions from the first polygraph:

And here is the result (sorry for poor quality, had to do a lot of tinkering to redact his last name: 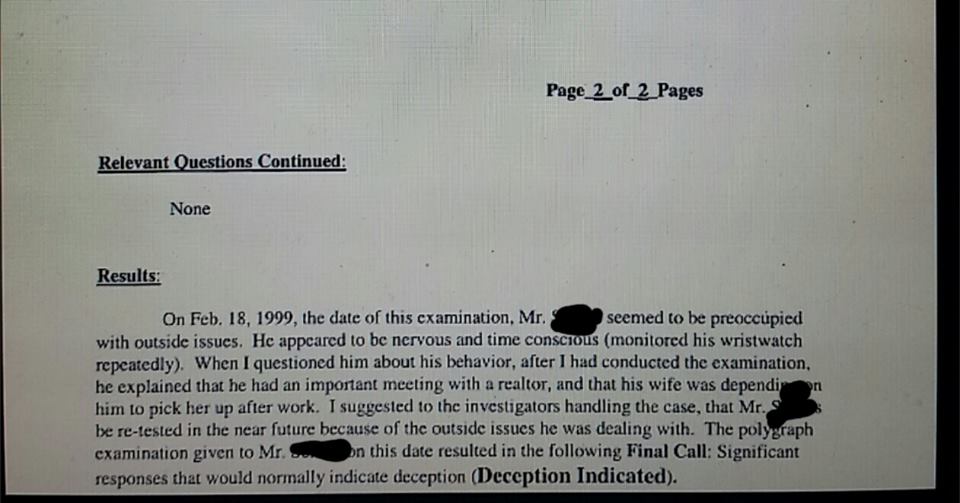 Now let’s look at the questions and results for polygraph 2:

Here is what is odd with these tests:

1) Why change the questions? How do you arrive at any real conclusion about Mr. S when the questions are totally different? Passing the second polygraph doesn’t at all mean that he didn’t lie on the first.

2) The second polygraph doesn’t at all probe into whether Mr. S went to the park to look for the body because he had heard something. It simply probes around on a single question – do you know how she was killed?  He could easily have passed this test if he didn’t know how she was killed but he did go there looking for her because he had hear something.

3) The most pertinent questions were on the first test – are you withholding information about the death of the girl and have you been to that spot before? He said no for both questions and failed the test. But apparently the police dismissed that failure because Mr. S seemed nervous. Fair enough. Administering a second test with different questions, as far as I’m concerned, means the results of the first polygraph stands. But the police, as the podcast said, let Mr. S fade away from case. A mistake as far as I’m concerned.

My theory is that Mr. S wasn’t connected to Hae’s death but heard something from someone about her being buried there, in that exact spot. I’m not saying its weird for a streaker to be so concerned about privacy that he walked 127 feet into the woods to take a quick leak (mm hmm) but I am saying that there is no way her body could have been found (given how it was buried as explained in the show) unless you knew exactly where to look for her. Or unless you were a bloodhound. Mr. S also didn’t do to well on the witness stand, but more on that once the podcast gets to the trials.

INCONSISTENCIES, ALSO KNOWN AS LIES: What you’re looking at below is a 60 page spreadsheet created to keep track of the Jay’s first and second statements. It is a cornucopia of inconsistencies.

This spreadsheet, by the way, is just of two of Jay’s statements. It doesn’t account for his other statements and it doesn’t account for inconsistencies in his testimony at trial. Not getting into the trial right now, and not even even getting into every single inconsistency in his statements because it would take hours if not days to point them all out individually. But here is an example (though if you compare cell by cell, the statements are wildly different on almost every point): 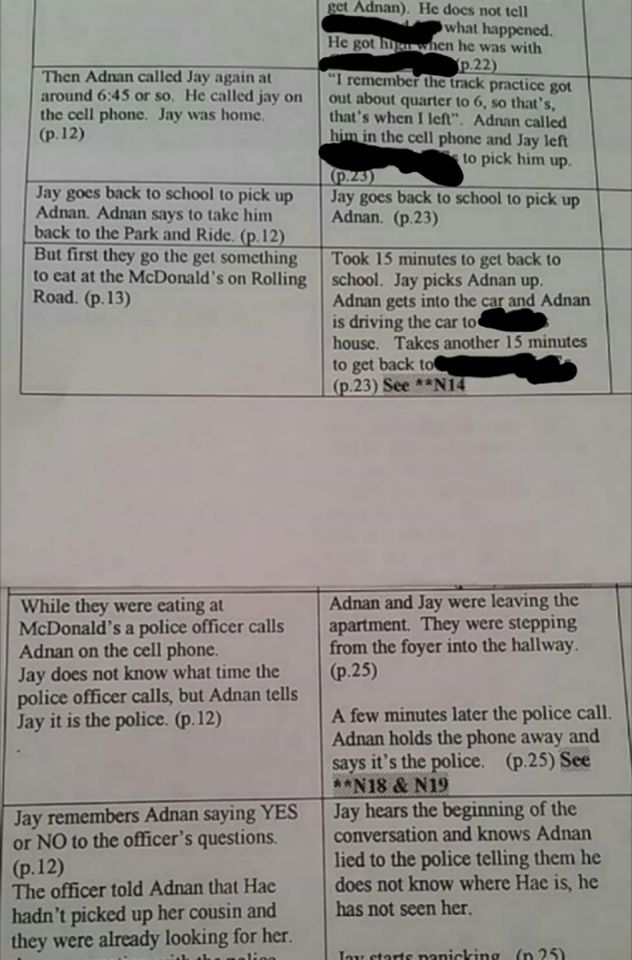 According to just these few cells, Jay picks up Adnan after track practice sometime after 6. Not exactly sure when but definitely after 6pm. A page down or so he says Adnan got a call from the police, and in statement one he says the call lasted about 15 minutes. Now here is a partial shot of Adnan’s cell phone records that evening. I’ll be generous and broaden the time frame in which Adnan may have been called by the police:

The left column shows where the calls were either going to or coming from. Incoming calls are noted as “N/A”. After 4:27pm there are 8 incoming calls. None of which are even remotely close to 15 minutes long. The longest call is at 6:24pm and lasts around 4 minutes. So maybe that’s not a big deal. Maybe the police called for 4 minutes and it seemed like 15 minutes to Jay. If anyone knows, it’s the police, they must have records of who they called and when. 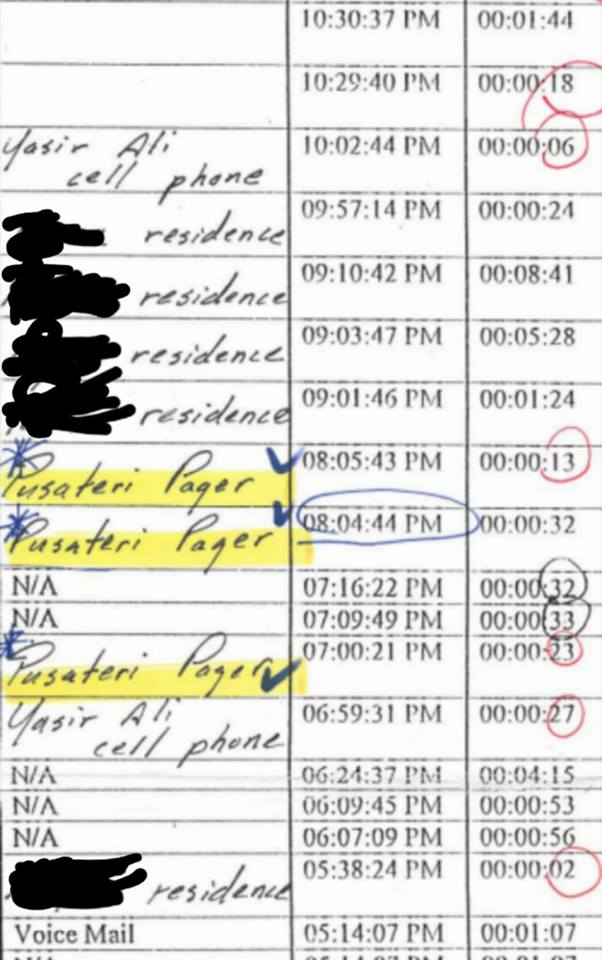 The point here is that there are so many discrepancies in Jay’s statements its nearly impossible to gauge what is true and what’s not. His statements are almost nearly unreliable – except when it comes to a few things. He knows where Hae’s car is. He knows where the body is buried. He even knows how it was buried: 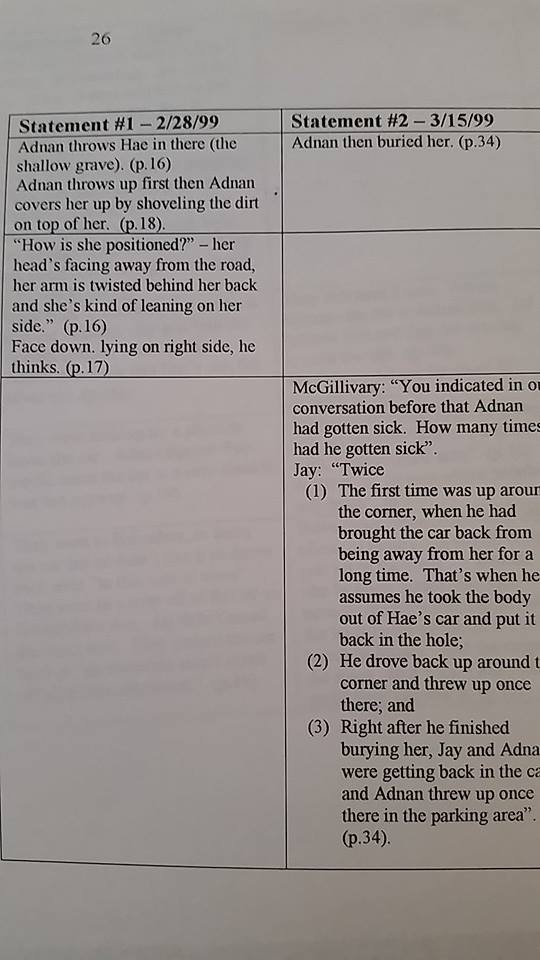 Whether or not you believe Adnan is innocent, like I do, we can all agree on this: only Jay knows the absolute truth. The only real conclusion I draw from Jay’s inconsistencies is that I don’t believe him. He is not reliable, yet he has more information than anyone else and admits to dumping his clothing, shoes, and shovels.

Here is someone else who either can’t remember the day properly or is lying (it has to be one or the other). Jen Pusateri’s statement:

Ok so Jay was at Jen’s house between about 1:30 to 3:45. That’s interesting considering this: 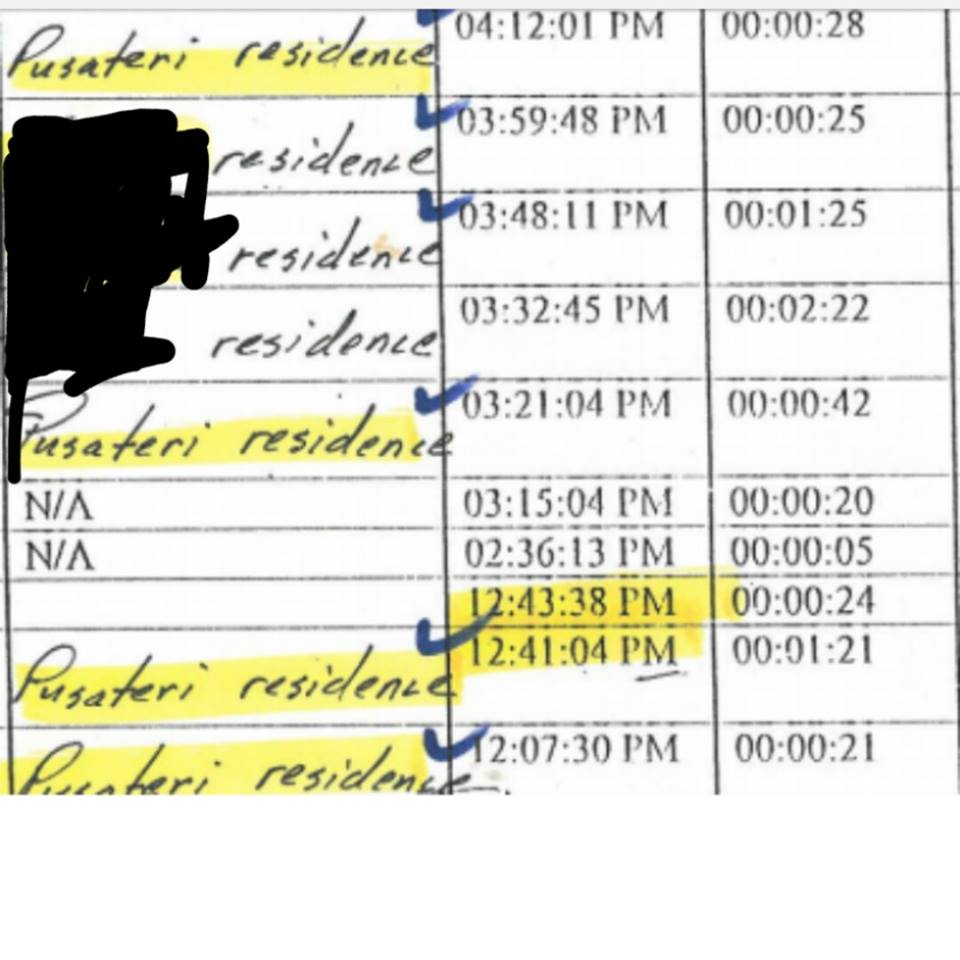 In the time period Jen says Jay was at her house, two calls were made from the cell phone Jay was carrying (Adnan’s phone) to Jen’s house. See the two calls? At 3:21 and 4:12. Was Jay hanging out with Jen at her house and calling her at the same time?  During that day, the records show four phone calls to Jen and three pager calls to her. Seven communications to Jen from Jay, including during the time he was supposed to actually be with her, makes me think Jen knows much more than she ever told the police.