Ha!  As I watched the inauguration yesterday, I thought — I bet liberals’ heads are exploding.  When Mel Gibson and Vince Vaughn had to sit through Meryl Streep’s diatribe against now President (!!) Trump, they had to endure just a few minutes of discomfort and insult.

Part of me is sort of glad that America got to see who Trump really is yesterday.  And that the faces of liberals were probably as pained as Gibson’s and Vaughn’s.

Last night, Meryl Streep went on a diatribe against President-elect Donald Trump.  She, of course, was lauded by liberals in the room — which was about 99% of the audience.

According to IJR, she said:

“There was one performance this year that stunned me — it sank its hooks in my heart. Not because it was good; there was nothing good about it. But it was effective and it did its job. It made its intended audience laugh, and show their teeth.

“It was that moment when the person asking to sit in the most respected seat in our country imitated a disabled reporter. It kind of broke my heart when I saw it, and I still can’t get it out of my head, because it wasn’t in a movie. It was real life.”

“This instinct to humiliate, when it’s modeled by someone in the public platform, by someone powerful, it filters down into everybody’s life, because it kind of gives permission for other people to do the same thing. Disrespect invites disrespect, violence incites violence. And when the powerful use their position to bully others we all lose.”

But there were two well-known conservatives in the audience who weren’t digging it as much as the others, Mel Gibson and Vince Vaughn:

I think their reaction summed up most of America’s.

Perhaps we now know what Mel Gibson and Vince Vaughn were thinking about when the cameras caught the looks of consternation on their faces. As soon as Streep finished her emotional speech, someone took umbrage at the fact that she claimed Hollywood protected the innocent. In fact, Hollywood all-too-frequently covers up sexual predators and even gives them awards.

You guessed it.  Meryl Streep. David French on National Review put it best:

As bad as it is to mock a man’s disability (again, Trump has denied that was his intent), Polanski’s conduct is several orders of magnitude worse… The choice of any actor to work with a man on the run from prison for rape is absurd, the partial standing ovation (including from Streep) is disgusting, and the decision not to tell the audience why the Academy was accepting the award on his behalf is cowardly.

Read it all here. Of course, I have no idea what Mel and Vince were thinking…  But Hollywood has produced its own fair share of victims in their quest for fame and fortune…  They need to stop acting like they are our moral superiors.

Want to see how Donald Trump responded to the speech? Click HERE. 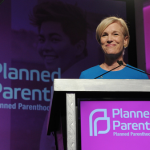 January 8, 2017
For true happiness in 2017, Planned Parenthood suggests you do this
Next Post 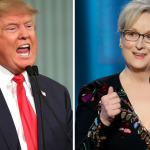 January 9, 2017 Trump's response to Meryl Streep says it all
Recent Comments
0 | Leave a Comment
"Hi there, sluggerz.For the purpose of what I talk about re: racism, it's to do ..."
penpusher Snoop Dogg threatens to “roast the ..."
"Can you give your thoughts on slavery worldwide? After all, slavery didn't start in the ..."
sluggerz Snoop Dogg threatens to “roast the ..."
"Hi there Bob Wehadababyitsaboy.The problem we must negotiate, when attempting to have some semblance of ..."
penpusher Haircare ad featuring white girls angers ..."
"Are you some kind of idiot? You think that EVERYBODY doesn't deal with shit like ..."
Bob Wehadababyitsaboy Haircare ad featuring white girls angers ..."
Browse Our Archives
get the latest from
Politics Red
Sign up for our newsletter
POPULAR AT PATHEOS Politics Red
1