The Savior Wears A Mask 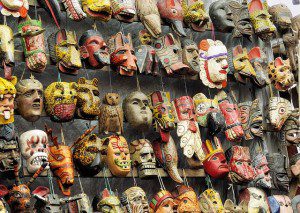 Ezra, you’ll recall, is the name of the prophet who found the scrolls of the Law and had them read to all the returned exiles. It’s not the real name of my neighbor down the block, but it’s close to it. Let’s call him Ezra. Ezra is a perpetually grubby little boy with autism, epilepsy and a mouthful of crowns; he is his mother’s middle child. His mother is chronically ill herself and she has no other parent to help her with the baby, so he tends to wander the block, looking for someone to play with, as most of the boys his age do in this neighborhood. The other boys Ezra’s age think he’s no fun, because he rarely throws balls to them; he likes to take balls and throw them on the porch roof. As a matter of fact, he throws everything he can onto the porch roof: balls, bats, trash, sticks, my daughter’s new sneakers. He throws things on the roof for fun, and to show off for attention, and also in nervousness if someone tries to snatch a toy from him. When he can’t throws things on the roof he finds a tree or a man hole, and throws them there. He breaks toys by accident and pours out bubble soap to see what will happen, and once he tried to poke a wasp’s nest with a mop because he was told not to. He doesn’t speak much, and he’s afraid of loud noises.

I took to Ezra at once, because I’m no fun either. My daughter is much younger than he but their vocabulary is about the same; they play together. Ezra likes to build with blocks, so when he wanders by, I get out my daughter’s block set and let him play with them in the shade of my front porch. He likes to play in the dust, so I give him and Rose plastic cups and let them make sand castles in the ditch at the end of my yard. Mostly, though, he likes to throw things and get them stuck in inconvenient places. I told him he could visit my house at Christmas and throw ornaments at the tree for me, to save me the trouble of decorating.

Once, on an exceptionally hot day, I was sitting in my only air conditioned room, worrying, when the kitchen door opened and Ezra wandered in. The general neighborhood rule is that children can play unattended in anybody’s yard, but they aren’t allowed to invite themselves in– but Ezra is not very good with rules. He was excited to explore the inside of our house; he was fascinated with the downstairs toilet, since ours is the only house he’d ever seen with a downstairs toilet. I wasn’t in the mood for company, just then. But I decided that when Ezra unmasked at the end of time and proved himself to have been Christ all along, I was not going to have Him ask me why I was inhospitable. I welcomed Ezra. I let him use my downstairs toilet, I let him wash his hands in the kitchen sink afterwards, and I set him and Rose to work helping me make cookies. He was surprisingly enthusiastic and focused, as if he’d only been waiting his whole life for someone to trust him with a task of any kind. He ate four cookies before going home to dinner, happy. I don’t think he’d ever been on a visit before.

Mid-summer, a sour middle-aged woman moved into the vacant house on the block. She tended to talk loudly to herself and have screaming, expletive-laced conversations with someone on the phone; she liked to mow the lawn exceptionally early in the morning when I was trying to sleep. She complained vehemently about the adornment of toys on my porch roof and in the bushes from Ezra’s visits. She picked up trash that blew off the street from her own lawn and put it on my back porch. She suspected passersby of wanting to poison her German Shepherd, and she left the German Shepherd on such a long leash that it dug up the edge of my yard as well as hers. I disliked her, and she made no secret that she felt the same way about me.

The little boys of the neighborhood tend to play together in any yard they like all summer, without paying attention to boundary lines, and one day they were playing in the sour woman’s yard. Ezra was with them, tagging along the periphery as children with a diagnosis must have had to do since the beginning of time. The boys decided to throw rocks at a funny looking pipe sticking out of the lawn. Ezra, glad for a game he could understand at last, threw rocks as well. One of the boys’ rocks shattered the pipe, but of course no one cared to admit whose rock it was. It turns out that this was the exhaust pipe for the sour old woman’s furnace. The repair cost her quite a bit of money. Fingers were pointed. The neurotypical boys and their parents knew how to play innocent in a way the guileless Ezra couldn’t fathom. They claimed they hadn’t been throwing rocks; they hadn’t been in the yard at all, never near the place. It was Ezra’s fault. Ezra, infamous for throwing toys on the roof, had thrown a rock at the pipe and broken it.

The sour woman cursed out Ezra’s mother in full sight of the neighbors; she accused her of being a prostitute and a hundred other things while the neighbors watched, dumbfounded. She demanded ten thousand dollars in compensation. She threatened to call Social Services. Indeed, for two weeks afterwards, whenever Ezra or his siblings or mother went into the front yard, she ran out onto her porch and took cell phone pictures, shouting that she was going to show them to CPS and get the “retard” taken away to a foster home. Eventually, she resorted to putting a camera on a tripod in her window day and night for a week.

I was incensed. That foul shrew was photographing neighborhood children, in order to humiliate a poor woman and dispose of her special needs child. I was going to get her. I was going to get her arrested and dragged off to jail or a nursing home, or wherever they put evil old women. I started deliberately going for my evening walks in a different direction, so I could walk past her house and catch her in the act of photographing Ezra. Then I would call the police. And the police would drag her off to wherever they dragged sour old women. I was going to make that miserable cow sorry she’d ever moved into the neighborhood, and I was going to enjoy it. I was going to stamp out a threat– for the children’s sake, of course. But every time I walked by, the camera was conveniently gone. I wouldn’t have anything to show the police when I called them. I couldn’t get the beast punished without evidence, so I bided my time, smoldering. The camera eventually went away for good, and the sour woman went back to screaming on the phone instead of at Ezra’s mother, but my wrath did not abate. I told myself that I was trying to protect Ezra– and I was, to an extent. But my anger was getting the upper hand, and becoming my main motivation.

One night, as I walked by, I saw that the screen door was open. The sour woman was in the living room with loud music playing. Her big German Shepherd dog was standing on his hind legs, and she was dancing to the music with him. She was smiling– her face was beaming with love for the dog. The wicked old witch was human. Wounded, wretched, sinful and human. Like me.

Holy Mother of God, pray for me. I’ve failed in charity once again. I forgot that in in eyes of God, no one is an odious hag, but everyone is a lonely grubby special needs child with a mouthful of crowns. At the end of all times, when kings and poor children arise from their graves, when the scroll of the Law is read to all people, when the sour, addled woman unmasks and reveals that she was Christ all along, I’ll have nothing to do but plead for mercy. As usual. Fortunately, mercy is abundant, and all of us children are welcome in the house. 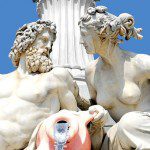 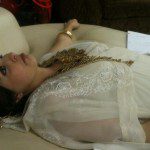 April 21, 2016 If I Perish, I Perish: In Which The Author Subscribes to Pure Flix
Recent Comments
0 | Leave a Comment
"Regrettably, a lot of armchair gymnasts will still be annoyed that she decided not to ..."
Kyllein MacKellerann " Something About Simone Biles
"More than too da*n many years ago, I played at Gymnastics. I ran into the ..."
Kyllein MacKellerann " Something About Simone Biles
"You’re not being too cynical. You’re accurately noticing a pattern.Those supremacist abusers are also anti-choice, ..."
Juniper Something About Simone Biles
"Leave me be, dude, while I'm still being polite instead of blocking you."
AnonCollie Yet Another Take on The Pillar ..."
Browse Our Archives
get the latest from
Steel Magnificat
Sign up for our newsletter
POPULAR AT PATHEOS Catholic
1