Update: For continuing reporting on this incedent, and on Pavone and Priests for Life’s efforts to dig themselves deeper and deeper into their shame and counter-witness, I encourage you to consult the blog Proper Nomenclature  by Keith Michael Estrada. Of particular interest is this post “Breaking: Fr. Frank Pavone defends sacrilege: “The issue is not how I’m treating a baby.” ” published sometime Monday after I originally completed the below. Keith is always a reliable and responsible source for reporting on issues of concern to Catholics who do not want to divide social justice from the fullness of the faith.

Our readers are of course already aware of today’s latest thing we at Steel Magnificat would rather have nothing to say about. As much as it would be better to not have such things happening in the world, since they do happen, we must bear witness and not remain silent.

Mary has written directly about this latest incedent and its outrageous counter-witness to human dignity, and I have nothing really to add to her statements (this is the wrong medium for tears and swear words). I do, however, want to draw your attention to some of the implications of Pavone’s mad act that some of our fellow writers here at Patheos have written about.

First, recognize that this is a desecration of human remains aimed at gaining a political advantage. As Matthew Tyson of Mackerel Snapper writes,

“Abortion is terrible, but you don’t fight it by desecrating a child’s body on the altar for political purposes. That’s not pro-life. It’s not bold, it’s not courageous, and it certainly isn’t necessary. It’s sacrilegious.”

I cannot but agree.

This is an act not only against human dignity, especially the human dignity of the unborn, but also against the Catholic Faith. Scott Eric Alt has drawn attention to how this action desecrates not only the body so treated, but also the altar used to do so:

Here I do need to slightly disagree. I do not believe that it would be appropriate to simply suspend Pavone’s faculties to say mass. This for the very simple reason that such an act would leave him free to administer other sacraments, to teach and to otherwise represent the Catholic faith. I believe that the most appropriate course of action would be to strip Pavone of all priestly responsibilities and ministry and forbid him to publicly represent the Catholic faith in any way – with the penalty attached of being both excommunicated and laicized should he not abide by such a restriction. Such a severe penalty would give definite and loud witness to the fact that this sacrilegious display in no way represents Catholic faith or practice. Such an act would serve to somewhat restore the voice of the Church as an institution and Catholics as individuals to speak about abortion, human dignity and topics of political concern. (Granted, the horror of this situation is both more urgent and more relevant than its effect on the public face of Catholicism, but in this instance the counter-witness has the possibility of making it harder for any Catholic to offer witness to the gospel. Thus, the stakes here are more serious than mere public relations.)

That said, the responsibility for discerning what disciplinary action, if any, should be taken – as well as any other official ecclesiastical reaction – resides not with me but with Bishop Zurek of the diocese of Amarillo. Please pray for him as he considers this situation and decides what action to take.

If my reaction seems overly harsh to you, consider again just how carelessly and disrespectfully these actions by Pavone have treated both the remains of a human person and the Catholic faith. Sam Rocha has insightfully described the theological implications:

“This was a human body placed on an altar with candles lit around it in a last minute attempt to rally votes for Donald Trump — all orchestrated by a Roman Catholic priest.

There is a dark and macabre sacramental inversion in this. It would not be crazy to call it demonic. Nor would it be theologically out of line to see Fr. Pavone as another demonic example of the line of cultural warrior priests that includes Maciel and Corapi. I stake my own theological mandatum on this.

Furthermore, this is a literal example of a Catholic priest making an offering to the idol of Donald Trump. Fr. Pavone used the ancient Hebrew ritual and Christian sacramental heritage, the imaginary of the source and summit of the Catholic faith, to display a naked, dead body of a human being as a way to dramatize the need to vote for Donald Trump in the last days of the US election season.”

For additional perspectives Mark Shea has written several short pieces relating to this situation on his blog.

In conclusion I want to stress how far this kind of performance is from truth-telling and I do not know of a better way to do so than to quote these words from Rebecca Bratten Weiss:

‘One role of art is to present us with horror in such a way as to give us space from it, a way of processing it, addressing it in the public space. Slapping a naked, injured corpse down on an altar may be sensationalist performance art, but it is not art. It is a serious violation of human dignity.

Secondly, even if there is journalistic purpose in displaying some photos of dead bodies – making we in the comfortable west more aware of the true vileness of war, for instance – exposing aborted humans is not like exposing those killed in warfare. Not because one or the other is more or less a victim. I’m not making that claim in any way, because I believe all human life must be protected.

No, in this case, these images serve to harm the other victims in the picture: women. Women who have suffered repeated miscarriages, who have had to bury their own premature or stillborn children, find these images triggering.”

(Image: This meme representing St. Michael defending the sacred was produced by Mary Pezzulo using a detail of a traditional icon of the Dormition.) 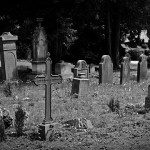