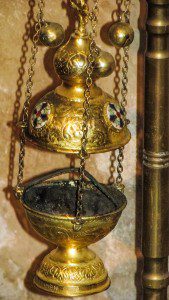 You may recall that I’m directing this year’s Christmas play at my church.

This play has become a demonstration of a saying of one of my Orthodox friends: anyone who tells you Eastern Christianity is an organized religion is lying. It’s pure chaos.

We had our penultimate rehearsal Thursday night. Half the children still don’t have costumes including my daughter, who decided at the last minute to play the part of an angel instead of being in the audience as we originally planned. That’s okay, because we’re still re-casting parts. One little girl cried because she didn’t have any lines, so I gave her one that isn’t in the script. One young shepherd without a speaking part looked so bored, I told him he could be a sheep instead. He crawls up and down the aisle with the rest of the procession now. His sister said they’re making his costume out of a real sheep skin rug.

This is a grace. You need crawling sheep with rugs on their backs in your Christmas play, or you won’t think enough about humility. A child becoming an animal for a ten-minute play is nothing compared to the Son of God becoming a human child without change, living a man’s life on earth, descending into the nether world, and remaining a human for all time. Someday we will see Him, human and God at the same time: infinitely more glorious than anything we have ever beheld, infinitely more humble than a human being crawling down the aisle at church, infinitely more playful than a human child cavorting around with a sheepskin rug on his back.

Half the children do not know their parts, but that’s okay. I don’t know my part either. The only way for us to get together a coherent Christmas play in the little time we had was for a grown-up to chant the narration and the lines for Holy Archangel Gabriel from the choir loft while the children pantomimed most of the action. So, I gave myself the part of Holy Archangel Gabriel. I’m standing in the choir loft by myself, chanting the Gospel according to Luke, despite the fact that I can’t chant my way out of a wet paper bag. I was raised Latin Catholic. I can Gregorian chant. I don’t know Eastern chants. One chant in particular is supposed to be in The Fourth Tone, and The Fourth Tone and I don’t get along. I’ve been listening to The Fourth Tone on repeat for hours and I still can’t get it through my head.

This is a grace. I shouldn’t expect to be good at playing Holy Archangel Gabriel. My older brother is not eternal like God, but he’s too far beyond me to be measured. He doesn’t have to memorize the Fourth Tone; the chant tones were written to be poor imitations of his song. It’s good that I falter and forget what I’m singing, or I might imagine I knew what an angel sounded like. Someday I will hear him singing the Thrice-Holy Hymn in the tongue of angels: brighter and more glorious than any human being except Christ and the Theotokos.

The little boy playing Holy Archangel Michael is supposed to escort Mary and Joseph onto our little stage in front of the iconostasis, waving a thurible. I made the thurible myself out of metal chain and Christmas ornaments, because no one is allowed to wave the real thurible but a priest or a deacon. I’m not the best craftswoman, so of course the thurible fell to pieces at our last rehearsal. I’ll have to build it again from scratch. The little girls playing the Hebrew Midwives are bathing the Baby in our social hall’s punch bowl and reverently wrapping Him in an old scarf. The little boy playing Holy Archangel Uriel is supposed to carry the Star of Bethlehem on a stick, to guide the Wise Men to the front of the church. He hasn’t remembered his queue once yet; none of the children ever remember their queues. The whole church has to wait for him to remember what he’s doing, just as the People who Dwelt in Darkness waited for thousands of years to see if the Lord remembered them. When they finally saw Him, He was a homeless baby and a refugee. When our congregation finally sees the Star of Bethlehem, they’ll see a sparkly Dollar Tree snowflake on the end of a lawn dowel.

This is grace. There’s nothing I can make from Dollar Tree ingredients that would properly honor the Son of God incarnate. I wouldn’t be able to honor Him if I have every precious metal and stone in all the world. Someday I will see Him, seated at the right hand of the Father. I will hear the Son of God calling me to Himself. I will stumble forward with my arms full of shoddy gifts– broken thuribles that don’t burn incense; plywood snowflakes and plastic punch bowls; sincere repentance for every missed opportunity; good works done poorly but with love. And the Son of God will accept them, and name me His bride at the wedding feast.

There’s so much brightness, silliness and chaos in Christmas celebrations. So many things can go hilariously wrong. We might miss out on the grace hidden in every poorly made representation. But the grace is always there. 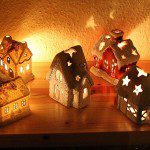 December 10, 2016
When it's Dangerous To Go Home for the Holidays
Next Post 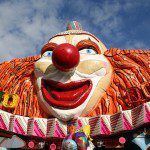 December 12, 2016 Need Something Creepier Than Elf on a Shelf?
Recent Comments
0 | Leave a Comment
Browse Our Archives
get the latest from
Steel Magnificat
Sign up for our newsletter
POPULAR AT PATHEOS Catholic
1