Need Something Creepier Than Elf on a Shelf?

Need Something Creepier Than Elf on a Shelf? December 12, 2016 Mary Pezzulo 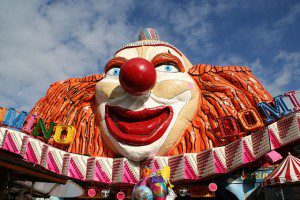 I don’t go for Elf on the Shelf, myself.

My daughter doesn’t need a constant reminder that an authority figure is watching over her. That’s what parents are for. And I don’t really think that it makes sense to celebrate Christmas by claiming that Santa only brings presents to well behaved children. The whole point of Christmas is that we were very bad indeed, and God the Father responded to our badness by giving us the best Gift there ever was. I don’t think it’s fitting to celebrate Christ’s outpouring to me the worst of sinners, by telling my daughter she’ll get a sack of toys if she’s a good girl and a sack of flammable coal and twigs if she’s bad. She’d probably enjoy lighting fires as much as playing with toys anyway.  But that’s just my take.  Celebrate Advent and Christmas in the way that works for you.

In any case, I’ve found a clever alternative to Elf on the Shelf, another way to tell your child that God is watching them. It’s a bit more sublime, more chilling. It should surprise no one that it was invented by Christians trying to introduce Jesus to their little ones. This demographic came up with the idea of learning Bible stories from a possessed cucumber and tomato, and now they’re at it again with something just as uncanny.

Take a look at the latest thing in Christian proselytizing toys:  Jesus Sees Us.

Click on that link. Look at those eyes. Those enormous, lidless dilated manga eyes that stare into your SOUL, which I guess is appropriate for Jesus to do. Look at the delicately tweezed brows. Look at the disproportionately small hands, as if Jesus was related to Donald Trump. Look at the halo, which is apparently drawn on the box and not stuck to His head. Look at the hair, which is reddish, unlike the hair of anyone from the Middle East. Chilling.

I’m sure you’re all clamoring to know how you can use a Jesus Sees Us around the home. Fortunately, the website spells it out for us.

Give your children a gift they can carry with them always—faith! The Jesus Sees Us doll and book are so much more than just a doll and book. Jesus Sees Us is a beautifully relatable tool for introducing faith, Jesus, and His teachings into your child’s life. Children cling to things that make them feel secure and are drawn to the wonder of something they can believe in.

Great, but why can’t you just give your kid an icon? Get a nice sturdy icon with no gold leaf to rub off and chip, make them an icon corner in their play room, get some electric flicker candles from Dollar Tree, an unbreakable vase and some silk flowers they can change out for different days, maybe tablecloths in liturgical colors. Look at the icon with them, show them how to read icons. Remind them that an icon is like a little window to Heaven and that the Lord is always watching in love. Get them a portable icon of some sort to take to school in their backpack or even snuggle on scary nights. I’ve got an icon I sometimes keep on the nightstand in case of bad dreams. Heck, my good friend Elisa sells quilted cloth icon baby books and they’re adorable. What does Jesus Sees Us have that an icon doesn’t?

Oh, right, these people are Protestant. No graven images or icons allowed, but a molded plastic doll to serve the same purpose is okay. Jesus Sees Us it is, then.

I’m not being entirely fair. The other advantage to the Jesus Sees Us, as opposed to a nice icon of Christ Pantocrator or something like that, is that Jesus Sees Us can be played with. The website claims that children will come to see Christ as a cuddly superhero, and act out their favorite Bible stories using Jesus Sees Us.

I hate to burst your bubble, but no.  I’ve been a child myself. I’ve babysat, I’ve worked in day cares, now I’m a mother. I know how children play with toys. You envision children as reverently using their Jesus Sees Us to act out Bible stories, but that’s not how it’s gonna work. Jesus Sees Us is going to be a Batman villain. He’s going to be recruited to marry Barbie. He’s going to get folded in half and used as a makeshift gun. Siblings will set up pillow forts on either side of the room and lob Jesus Sees Us back and forth headfirst as a projectile weapon. They will fight over Jesus Sees Us, one child clinging to His heel while the other yanks on His hair. Within two weeks you’re going to be screaming “Get in here and pick up all your toys or I’m throwing Jesus in the trash!”

Heck, what if your child comes down with scarlet fever? You’ll have to burn all the toys including Jesus Sees Us in the backyard. And maybe a fairy will come along and turn Jesus Sees Us into a real Jesus just like the Velveteen Rabbit. Do you want to be responsible for that?

I once gave a little boy a Saint Francis action figure I saw at the Franciscan University bookstore (on clearance, alas; they don’t sell them anymore). It had the physique of a Ken doll but Saint Francis’s face and tonsure painted on the head, and it wore an accurate replica of a Franciscan Friar robe right down to the three-knot belt. Do you know where I found that toy a week later? Upside-down in the toybox with all the stuffed animals, stripped down to his underpants. Which, truthfully, is a fate I think Saint Francis would have appreciated.

Now if you’ll excuse me, I have to go hide under my bed. Can’t sleep. Jesus sees us. 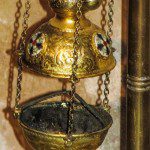 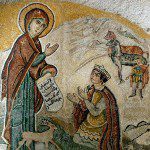 December 13, 2016 Pray With Me For Aleppo
Recent Comments
0 | Leave a Comment
Browse Our Archives
get the latest from
Steel Magnificat
Sign up for our newsletter
POPULAR AT PATHEOS Catholic
1