I Try To Pray 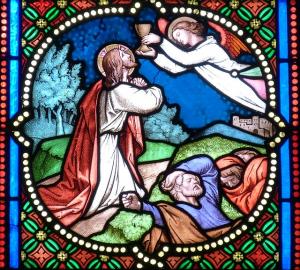 The flare has been going on all week.

I haven’t gotten out of bed before noon in days and days. I went to the store on the bus once, when the cabin fever got desperate. The errand took about half an hour, and it made me so weak I could barely walk from the bus stop half a block to my house. That was my highest energy point. Most of the time, I was too exhausted to stand for more than a few minutes. My gut is swollen and round as if I was pregnant, taut enough that it hurts to lie on it– but there’s no baby in there, only a tortured digestive tract.

Michael’s been bringing me breakfast in bed: a nice healthy breakfast of prescription medicine, vitamins, herbal tonic, cold coffee and overcooked fish. Hot drinks add to my swelling, so I drink everything cold. Fish is one of the foods I can eat during a flare. On normal days I can have everything but gluten; during a bad flare, all grain makes it worse. I go on the poor person’s version of a paleo diet– canned or frozen fish, whatever meat and vegetables are on sale, yogurt, frozen cauliflower, fruit, almond butter and guilt. Guilt because it’s expensive. I am the kind of poor person that Austin Ruse despises. According to his ilk, I ought to eat nothing but beans and rice, and bear the increased autoimmune symptoms as part of my cross.

For all I know, they’re right.

I dozed off again before I ate; I dreamed I was at Hogwarts, which looked depressingly like my grandmother’s house.

When I woke up, the fish was lukewarm and even dryer.

I wanted to fold laundry and clean out the closet today. Michael took Rose on a picnic and a trip to the Latin Rite vigil Mass, so that I could have a restful afternoon, but I wanted to work. I want to go to liturgy at my own church tomorrow, and receive Holy Communion this time. I might just have the strength to do those things, but probably not.

I’m always afraid when I get like this– afraid it will last forever. It can last a day, or several days. Sometimes it lasts a month. Before Rose was born, I was flared full-time for nine months. Maybe this flare will last for years. Maybe it will never go away this time.

I’m afraid to go to my regular doctor’s appointment. I had more tests done, and I honestly don’t want to know the result. I get new diagnoses all the time, after all. What if they’ve realized it’s not “just” chronic fatigue syndrome, fibromyalgia, IBS, reflux, acute gastritis, food sensitivities and that hernia?  What if they finally know why my liver has started swelling, and they’ve found out the reason is going to kill me? Wouldn’t it be better not to know until it happens?

But then, what would happen to Rose?

I try to pray.

I believe in miracles. I also believe in the times between miracles, when everything goes according to the way of the world; everything falls prey to entropy.  Everything suffers and is destroyed. I expect the Resurrection of the dead, and also that dreadful time before the Resurrection. Christ gave up the Ghost into the Father’s hands, but the Ghost descended into Hell. There’s no contradiction in that. You cannot escape the Father, even if you descend into Hell. Christ descended although He was without sin. I am a sinful woman, and I am in the Body of Christ– two reasons why I should not be surprised to find myself descending.

There could be a miracle any moment– the ordinary kind where things seem to go as well as could be expected, or the extraordinary kind, the kind Christ worked for the Widow’s son. Or, there could fail to be a miracle, and I could descend into hell.

I am afraid to pray.

What should I pray?

Father, save me from this hour?

How do I know how many hours the only good Father has saved me from?

I have been saved from believing the lie that suffering people deserve what they get– that they’re only lazy; that all they need are beans and rice and a third job, or a better doctor and a diet plan, or the right novena or a trip to Lourdes. The Father has shown me that suffering isn’t optional. It’s something that happens. It falls upon the just and the unjust in this broken, fallen world. There is nothing good about suffering in itself, but through the Father’s mercy, suffering can become grace.

I have been saved from believing the lie that people can and ought to be independent. I used to believe that with all of my heart. Our culture places so much emphasis on independence when there’s really no such thing. We’re born from a human body with the help of human hands; we survive to adulthood because humans care for us, and our whole lives we depend upon others. There’s no shame in that. It’s what our Father intended: that many diverse people made in His image should support each other as one body, as the Father, the Son and the Holy Ghost are One. A healthy and capable person might get the impression that they are independent– that they stand on their own two feet, with no one to thank but their own hard work. But such a person doesn’t exist. Even Christ the Almighty came through a mother, relied on a foster-father, stayed in friends’ houses and leaned on a stranger as He carried the cross.

I have been saved from seeing myself as capable or useful. According to capitalism and the sinful way of the world, I’m worthless, and I know it. When you’re sick, the world doesn’t let you forget that you’re worthless until the sickness goes away. My value is in Christ alone.  The truth is that everyone’s value is in Christ alone, and that no one remains useful for long in the eyes of the world. But I used to not know that.

The Heavenly King is everywhere present and fills all things. There’s nothing I could suffer and not find Him in it with me.

Still, I pray. Father, not this kind of grace. Save me from this hour. I want to get better. I want the swelling to go down. I want to get out of bed early in the morning, eat cheap food and work full days. I want to move to West Virginia and have a better life there, and I want to move sooner rather than later. Father, make it all go away. Make me into somebody else– somebody the world sees as useful and independent.

Father, send a miracle– either kind of miracle.

Father, take this from me.

Yet, not my will, but Yours be done.

That prayer is all He requires of me now. 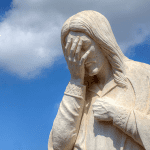 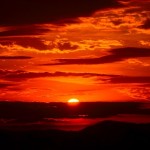 August 28, 2017 A Late Summer Tin Cup Rattle-- Plus! How to Use The New Button!
Recent Comments
0 | Leave a Comment
"I agree with you completely. I also agree with you that the March for Life ..."
MotherGinger The Problem With Cheap Gifts for ..."
"unfortunately, that's exactly what happened to me. :-("
Elizabeth Elizabeth | Mary Pezzulo
"I don't know if you will read this as I am reading and responding quite ..."
Elizabeth Elizabeth Yes, Antisemitism is Real, Wrong, and ..."
"I am so sorry he did that to you. He sounds like a monster. I ..."
Mary Celibacy and Priesthood: Contra Dwight Longnecker
Browse Our Archives
Follow Us!