To the Person Who Gave Dirty Clothes to the Poor

To the Person Who Gave Dirty Clothes to the Poor January 21, 2018 Mary Pezzulo 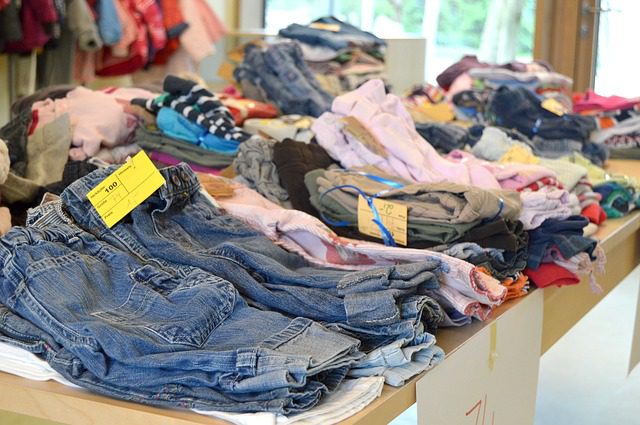 We’re having a nice little thaw in Steubenville. It’s chilly and sloppy out instead of bitter cold. It’ll be almost Spring weather tomorrow, then dipping back down. The snows will surely come back several times before we’re through, of course.

And I doubt even the warm spell will be enough to melt the mountains of snow we got last week. When Rosie went to Catechism class yesterday, she played in a drift outside that was nearly up to her waist. The schools haven’t had a week without a snow day since before Christmas. Water mains keep breaking all over the county. Nearly everyone’s been under a boil order at one point or another. I’ve lost track of whether my own neighborhood is still under “water conservation” instructions. And downtown, some places still don’t have running water after the disaster last week.

Downtown at The Friendship Room, a few days ago, they had to request that people stop dropping off bags of dirty and soiled used summer clothing.

Yes, summer clothing. And it wasn’t even washed.When half of downtown doesn’t have running water to launder things. The Friendship Room is not a thrift shop; they don’t have storage space to spare. All they do is meet the immediate needs of their guests on a person-to-person basis, and many of the guests don’t have houses or washing machines either. And to top it off, there’s an actual thrift store with a drop box a few blocks away. But somebody decided it would be generous to give soiled summer clothing to the homeless in January during a snow emergency and a water shortage.

As I was grumbling about this on Facebook, a friend chimed in to talk about the time her house burned down and, while they were homeless living in a hotel, people kept handing her bags of random used clothing that didn’t fit and were worn out. She had no storage for them; she had to throw them away. And another friend talked about running the food drive for her parish and receiving years-old packages of expired pudding mix.

I’ve already preached on this once, last year when people were leaving bathing suits and used gift wrap at the Friendship Room. But apparently I need to say it again: we are to love our neighbor as ourselves. Christ Himself said that that was the meaning of the Law and the Prophets. It’s not even a commandment limited to Christianity; just about any religion you can name has a version of the Golden Rule. The basic law of human decency and fair play is that you treat other people the way you would like to be treated in their situation.

That “in their situation” qualification is necessary. It’s sometimes not prudent to treat other people exactly as you treat yourself. If your Jewish or Muslim neighbor is hungry, you shouldn’t fry them up a meal of the bacon and black puddings you’ve been enjoying. If you yourself have Celiac’s disease, you probably shouldn’t give gluten-free sandwiches to the homeless, because they’re disgusting. Your male neighbor doesn’t need tampons. That sort of reasoning should be applied. But you must always remember that the Gospel requires you to treat other people with the same love and generosity you’d like to receive yourself.

Giving away old out of season clothes to a thrift store, especially if the thrift store has a rag recycling program, is one thing. But giving summer clothes to a person with no storage in winter is quite another. And giving dirty clothes is no better than handing them a sack of garbage. No one deserves to be given garbage. This is a violation of the Golden Rule and the Gospel.

If you like to wear clean clothes, as I expect most people do, wash your clothes before giving them away. If you like to wear warm clothes in winter, don’t expect a homeless person to be grateful for a sack of summer clothes during a snow emergency. If you wear clothes from the thrift store and the dollar store, keep a pair of used or dollar store gloves in your purse to give to a homeless person who has none. But if you’d never be caught dead in anything that cheap, don’t give them to a poor person. Give them gloves and shoes and socks that you would wear and enjoy wearing yourself.

The same goes for food, or anything else you give away. Don’t give expired pudding away. You obviously weren’t going to eat it yourself or you wouldn’t have kept it this long. If you eat nothing but plain spaghetti and cans of tuna–maybe that’s all you can afford and that diet works for you. Give some boxes of spaghetti and cans of tuna to those poorer than you are, and do it regularly. If you like to eat lasagna and baked macaroni, drop off a pan with a local charity that feeds the homeless– find out what their rules for donations are first, of course. If you eat organic free-range ethically slaughtered meat, find a way to get some meat of equal quality to a soup kitchen.  If you’re a vegan, give your local Catholic Worker House a sack of fresh vegetables and some tahini, whatever that is. If you’re putting together a sack lunch to give to a homeless person you see on your way to work, give that person a lunch you’d like to eat if you were eating outside. Or, ask the person what they like and bring them a meal they request. Or take them to Wendy’s on your lunch break.

This is the Law and the Prophets. This is a command from Christ that Christians can’t wiggle their way out of following without sinning. Love your neighbor as yourself– not a leaner, more Puritannical version of yourself, not a cheap version of yourself with bad taste, and certainly not as a recycling bin.

January 19, 2018
Keeping the Lights on in Winter
Next Post

January 23, 2018 That Bickering Body
Recent Comments
0 | Leave a Comment
Browse Our Archives
get the latest from
Steel Magnificat
Sign up for our newsletter
POPULAR AT PATHEOS Catholic
1