Trump, Arroyo and the S-Word: What Should Really Offend Catholics? 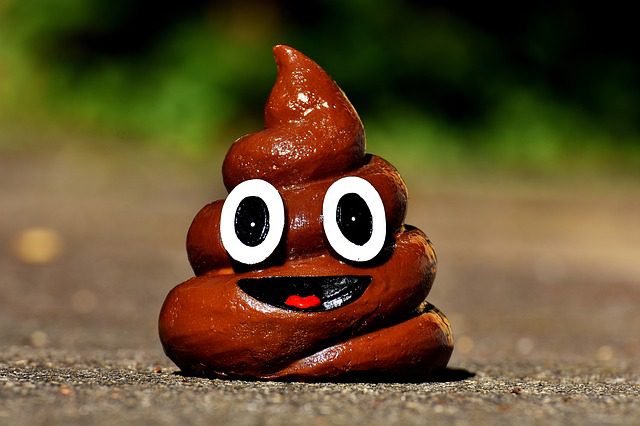 It has likely come to your attention that, according to witnesses, yesterday the president referred to Haiti and the countries in the continent of Africa as “sh*tholes “and asked why we can’t get immigrants from Norway instead. At press time, Norway, which has free healthcare and a very generous social safety net, had politely refused the president’s offer. I don’t think the president understands how immigration works, but then again I never imagined that he did.

News outlets jumped on this story like flies on dung. The word, without bleeps or asterisks, was spoken by serious newscasters and written out without asterisks in headlines all over the country.

EWTN’s “The World Over” host Raymond Arroyo was scandalized– not that President Trump, whom EWTN usually fawns over as though he were a living saint, was so open about his bigotry and unwillingness to help anyone whom he guessed wouldn’t immediately economically profit the United States. He was scandalized by that word. He tweeted about it, demurely replacing it with a poo emoji and a picture of a hole as I suppose he expects serious journalists to do. 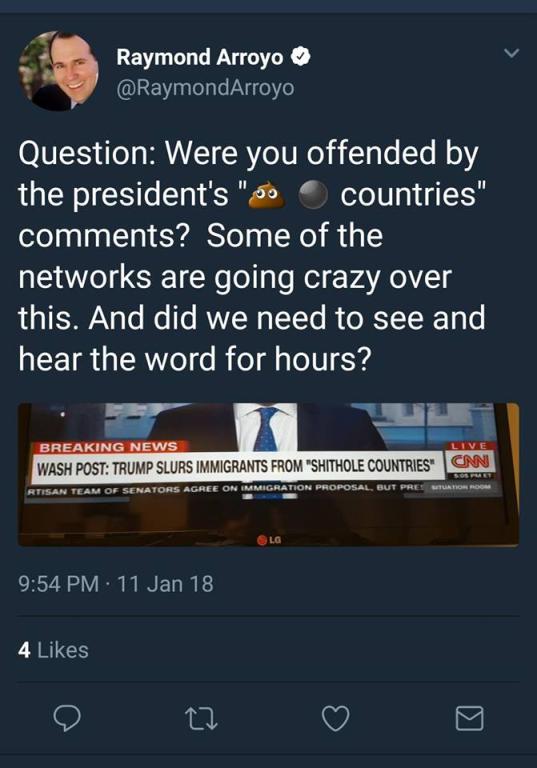 According to that tweet, it’s an open discussion question whether we should be offended by what Trump said about Haiti and Africa, but we certainly ought to be offended that grownup newscasters are saying a nasty grownup word in its entirety without the use of emojis over and over again. And I’m told, though I thankfully haven’t seen too much of it myself, that many Catholics on social media are following Arroyo’s lead. They’re scandalized by newscasters repeating the s-word, but seem nonplussed that the president used it to refer to whole regions of the world in the first place.

I’m not sure how many times I can get away with saying swear words in a Patheos column, but I’ll take the risk. There’s nothing inherently wrong in saying the word “shit.” It does not blaspheme God, because it’s not His name. It does not blaspheme Heaven which is His throne nor Earth which is His footstool. It’s just the Anglo-Saxon word for poop. Poop has no dignity; it doesn’t deserve not to be blasphemed. The only reason it might, in context, be a sin to say or write the s-word is that many people find it upsetting, and in the company of those people we ought to try not to shock for charity’s sake. But using the term in itself is not a sin. By contrast, the less offensive-seeming expletive”Damn you” is blasphemy indeed. You and I are not God; we don’t have a say in who is saved and who is damned. Excrement merits no consideration.

Do you know what is blasphemous? Racism is, for a start. Disparaging entire regions of the world where brown people live and wishing you could only have to deal with white people is racism, it is sin, and it blasphemes the God whose image is stamped on every human being regardless of their race. So is prejudice against poor people, calling them names and demanding to only deal with the prosperous or those whom you believe will prosper you.

Refusing to help other human beings who need it, is also a form of blasphemy. Christ is hidden in every human person, but even more in the helpless. He warned us about this in the most explicit terms. When you turn away someone who is needy, you refuse the proper homage to Christ and risk the fires of hell.  You may not be able to help them in the exact way they need, and you have a right to protect yourself within reason. But simply refusing to help someone because they’re not white, or because they’re from a foreign country, or because they won’t directly profit you, is sin. This goes for groups of people working as one as well as for individuals. A sin doesn’t cease to be a sin just because everyone is doing it or because it stands to make a lot of people rich. It’s sinful for people, institutions, corporations and countries alike to callously turn away human beings who need help to survive just because they won’t make a buck. A country has a certain responsibility to protect its citizens from real danger, but not seeing how someone might benefit you economically is NOT a danger. To refuse to harbor and help someone in need because you don’t expect  to profit from it is blaspheming the God whose image that person bears. It is directly contrary to the Gospel.

It’s a load of crap (and I think I can say “crap” in a Patheos column as much as I please) that the repetition of an old English oath ought to have us clutching our pearls. It’s a load of horse-hockey that the president didn’t mean anything racist or bigoted in his remark. And it’s most likely a load of chocolate that the average immigrant from Africa or Haiti would work less hard and profit the country less than somebody from Scandinavia who doesn’t want to come here anyway.

Despising the immigrant who comes to us for refuge is sin, though, and that’s where we ought to concentrate our outrage. 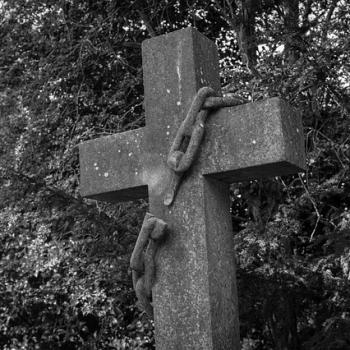