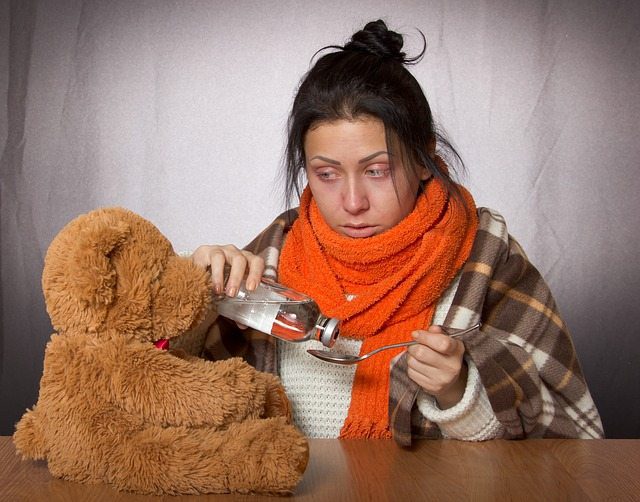 I was finally starting to get over the Annual Post-Christmas Fibromyalgia Flare-Up. With the help of a sun lamp, way too much rest and a strict diet, I’d gotten my bedtime up to four o’clock in the morning instead of seven. I had a slight amount of energy in the exact middle of the day. I’d even made it to Divine Liturgy on Sunday, by some miracle.

And then I made the mistake of leaving my house again.

I was determined to have some fun– but I remembered I lived in Steubenville and there’s no fun to be had, so I settled on going grocery shopping. I got on the bus, and I went to the store. The store was liquidating its toy section, so Rose ended up with a small Transformer and several of those irritating plastic cylinders that make croaking noises when you stretch them. I bought myself a blackberry soda and some gluten-free chocolate chip cookies. Michael the House Spouse bought some very economical chicken leg quarters that were about to expire. We chatted with the usual bus passengers about the price of real estate and how bad the flu epidemic had been this year. In true comedic fashion, we didn’t realize that this was foreshadowing. We just expressed our thanks that influenza had passed us by that year.

On the way back, the driver chatted about sick and messy passengers and how she kept the windows open when certain people were on the bus.  I didn’t pay her any mind. She’s always complaining about passengers. Besides, flu germs wouldn’t linger on a bus– would they?

For the record, they will. I looked it up a bit ago. Flu germs can last half an hour at least on vinyl upholstery, making the bus a giant rolling petri dish. That Lysol can the driver always keeps near the steering wheel has more uses than masking BO. But I didn’t have any idea at that point last weekend.

The next day I was very tired– from the exertion of going out while still recovering from a flare, I thought. The three of us were supposed to ride to Pittsburgh with Rose’s catechism class, but only Michael and Rose went.

That night, Saturday night, Rose was cranky and I started to have a sore throat.

The next morning it was all over. Michael, Rosie and I had the flu.

I used to think the flu was a minor illness, before I came down with the kind of chronic illness that the flu can make infinitely worse. But this flu wasn’t a minor illness for anyone. Michael was on the spare bed in the study, shivering; I was in the bedroom, sweating. Rose was downstairs on the sofa, with Netflix, drifting in and out of consciousness. Michael and I took turns coming downstairs to check on her and freshen up her chocolate milk, which required the exertion of a marathon each time. I wrote something about Mike Pence on the blog in the hour or so I felt lucid. That was Day One.

The next day was worse. Rosie wandered downstairs to watch Netflix and upstairs for company, but I couldn’t move. Michael refilled our water bottles, but the nausea was so bad we couldn’t eat. At one point I took Dramamine motion sickness pills for the nausea. Next thing I knew it was dark. I thought it must be three o’clock in the morning and wondered how I’d missed a day. I tried to sleep right through, but Rose kept waking every hour like clockwork and sobbing that she was falling sideways off the bed. All I could do was lean on her legs and reassure her, in my best Mommy voice, that gravity had not stopped working, she was fine, she just had to stay lying down and she wouldn’t fall anywhere, but she could barely hear me. At one point, she climbed out of bed to spend the night on the floor so she wouldn’t have anywhere to fall to. At another, I got out of bed wondering where the dawn was and realized it was only midnight and we were out of bananas, the only solids we’d been eating. That was Day Two.

Day Three, the fever subsided enough that I could watch Netflix with Rose, on the sofa. I’m still not sure I understand what Octonauts is all about, but I feel much more knowledgeable about giant siphonophores.

At one point I tried to make a pot of soup out of the chicken leg quarters so they wouldn’t go bad. I filled the pot with raw chicken and held it under the tap, but I forgot to turn off the dish sprayer so I ended up splashing a fine mist of raw chicken juice all over the kitchen, the clean dishes in the drying rack and in my eyes. I’m pretty sure nobody ever got food poisoning through their eyes, but I didn’t know how long flu germs lasted in a bus either so I’m not going to rule it out.

That night, we begged a local friend we don’t even know well to take Michael, who was least feverish, to buy liquids we could sip– but the friend offered to go himself. He brought us Sprite, ice cream and fancy name-brand orange juice, not to mention the biggest bags of cough drops I’ve ever seen and a package of DayQuil and NyQuil. And then he proved his absolute nobility by refusing to be paid back because “getting sick is a financial burden all itself.” Of course, he might have just been desperate to back away from the plague house and not take the germ-covered check I was trying to hand him with my grubby fingers. Still, thanks to him, we survived.

The next few days we stayed on the sofa with gradually lessening fevers, hacking coughs and more fatigue. At one point we switched from Octonauts to Mystery Science Theater 3000.

This morning, more than a full week after we realized we’d been hit with the flu, I was back to my old sluggish and badly fatigued self. Rose still had a cough and had to stay home, but I was clear to leave my house. I wanted to do something fun, but I remembered I lived in Steubenville. There was nothing to do for fun.

I took the bus to the grocery store.

And, spending the afternoon at the grocery store, I forgot to write my daily blog post. But that’s what I’ve been up to lately.