An Open Message to the Remnant: Do Not Engage in Calumny

An Open Message to the Remnant: Do Not Engage in Calumny February 28, 2018 Mary Pezzulo

A member of a mawkish-looking facebook group which is specially dedicated to complaining about my friend Mark Shea, recently handed me a screenshot that made my hair stand on end. 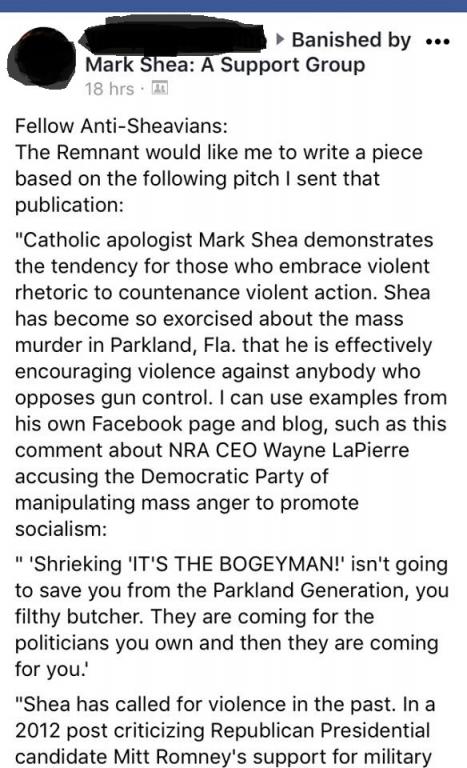 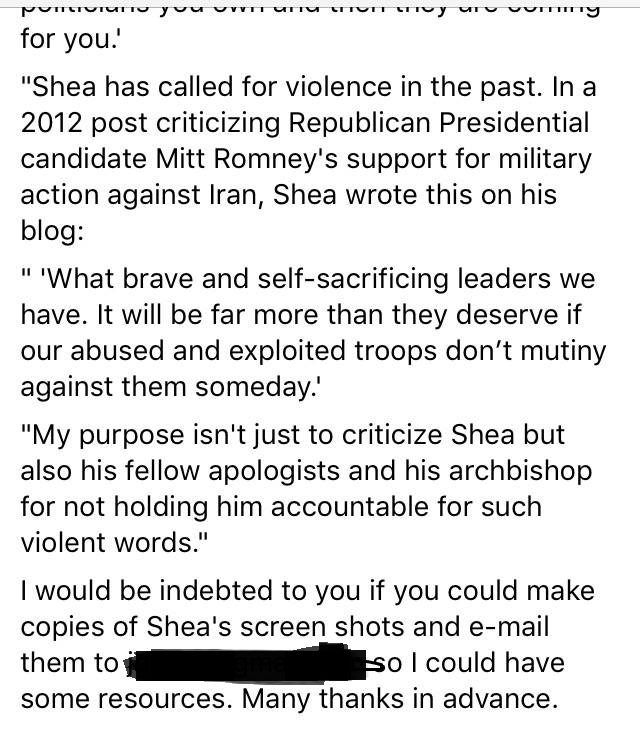 People responded with relish to this idea, commenting that they ought to show the article and screenshots to the police and Mark’s archbishop. I don’t know what they expect the archbishop to do to a layman writing a blog with his own opinions on his own time. I never know what people like that expect a bishop to do, and what’s more I don’t think the bishop does either. I don’t think anybody asked this person what on Earth “has become so exorcised about the mass murder” was supposed to mean either. That’s a word salad, and a pitch this badly worded would never make it out of the slush pile at any reputable publication.

It’s less funny that a lot of people on that thread, as I read in the other screenshots my friend handed me, want to share this upcoming Remnant publication with Mark’s employer to get him fired. They’re excited about that.

I understand that Mark Shea’s writing is not to everybody’s taste. It’s not to my taste 100% of the time, though I appreciate where he’s coming from and agree with him on a lot. He is deeply horrified by the downward turn in American politics and by the horrible show people claiming to be pro-life and faithfully Catholic often make of themselves, and he engages in the most peppery rhetoric about it on Facebook. I often banter along with him, because he’s a Patheos colleague and a personal friend.

Yes, friend. People sometimes act like they’re accusing me of wrongdoing when they say “you sound like you’re friends with Mark Shea,” but they’re just stating a fact. He’s my friend. Two or three times when we were on the skids, it was Mark’s either asking around or giving us some of his own money that saved us from disaster. Everyone seems to like when I write about how poor I’ve been and how much worse it was recently. Those posts always share really well and people tell me they’re heartwarming. Well, those “family and friends” I keep citing as our rescuers time and again include Mark. Whatever you think of his rhetoric, he’s done the work of a Christian.

And he has absolutely not made any calls for violence against persons. Forcefully worded denunciations, sure. Denunciations that are in bad taste and should have been worded differently, sometimes, and so have I. It’s Facebook, where good taste goes to die a painful death. And most bloggers are the same. We’re writers on the internet.

Most folks over the age of six understand that you can use phrases like “they’re coming for you” as a metaphor, in a context where it’s understood to mean the unseating of politicians in an election or the destruction of institutions, without meaning them as literal threats of violence. It’s not like waving a red flag in front of a bull. Literate people exercise reason and understand metaphor. Very few people just read violent words like “kill,” “smash,” “coming for you” or “delenda est” used in a political metaphor and decide to go on a killing spree. For another example of a writer using violent-sounding rhetoric without violent intent, I randomly select the freelance sports writer Joseph D’Hippolito who reported that the Dodgers “smashed” the Diamondbacks, the Cowboys were “crushed” and a volleyball team “smashed ten kills.” I don’t know anything about sportsball, but I’m pretty sure that D’Hippolito didn’t inspire any acts of violence by writing that. Political language is extremely similar.

Mark has indeed called for the total destruction of some institutions, but institutions are not persons and there’s nothing unethical about destroying corrupt man-made institutions. In fact, if the institutions are evil and hurt persons, they ought to be destroyed. The humans that comprise them ought to be kept from harm and helped to see a better way, but we can flat out wreck institutions with impunity if institutions hurt people. You can kill institutions. That’s allowed. And someone can take a screenshot of you calling for the death of an institution and try to make that look like a threat to the life of a person, but that doesn’t make it true.

Besides all of this, Mark has specifically and on no uncertain terms denounced acts of violence. These are all public posts you can check out for yourselves, and I’ll include links. He has shared posts from groups like Rehumanize International denouncing violence against everyone including abortion clinic workers, and he’s done it more than once. He’s applauded denunciations of violence against political figures he despises on his blog .  He’s done the same on facebook. He has praised nonviolence in general.

In my limited experience with The Remnant, I am afraid I have not found them to be the most honorable of publications. Perhaps I just always caught them on bad days. But I read and reacted to the 2016 Christmas letter from Remnant editor Michael J. Matt, wherein Matt literally praised the lord for slain infants, which is quite a bit further beyond the pale than Mark has ever been. And if Matt can get carried away and say something horrendously tasteless like that in his annual Christmas fundraiser, I think he’d better follow the Golden Rule and cut other people several miles of slack.

I hope that the person from the private group is just whistling Dixie about having been contacted by The Remnant,  but in case it’s true, I’d like to take this moment to publicly ask Mr. Matt to kill the story before it’s published. I’m using “kill” as a metaphor, in case anyone from the Mark Shea support group misunderstands; it means “decide not to publish the article after all.” Matt considers The Remnant to be a newspaper, a real journal rather than a sensationalistic dog-and-pony Patheos blog like this one. And I caution him that an article like this would not be journalism. It would not be an honest, public dialogue with a public person on a good faith assessment of his public body of work. It would be a one-sided, dishonest hit piece to deliberately smear the good name of another Catholic writer, and people are already promising to use that to get him into trouble. That’s the sin of calumny. And, judging from the pitch, it’d be very poorly written.

I’d also like to ask Mr. Matt to figure out what that “so exorcized” bit is supposed to mean, come to think of it. That’s scary stuff.

February 28, 2018
A Christian Response to Indefinite Detention
Next Post

March 2, 2018 The Problem of the Invisible Illness
Recent Comments
0 | Leave a Comment
Browse Our Archives
get the latest updates from
Steel Magnificat
and the Patheos
Catholic
Channel
POPULAR AT PATHEOS Catholic
1

Catholic
On Catholic Answers and the Problem of Violence...
Steel Magnificat