Seven Last Words: Today You Will be With Me in Paradise

Seven Last Words: Today You Will be With Me in Paradise February 20, 2018 Mary Pezzulo 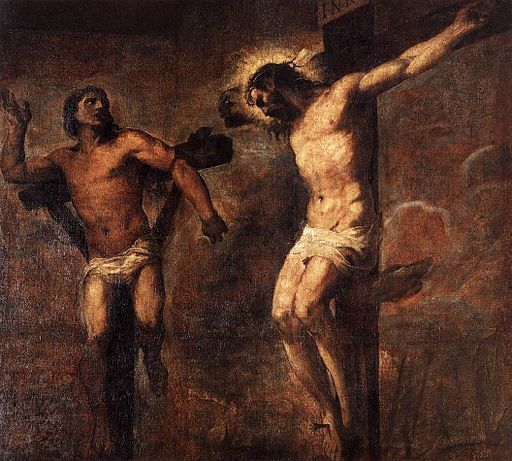 Dismas had not lived a good life.

He had lived the worst of lives. When he had his moment of clarity and repentance at the very end, he said that what was done to him was just. This hideous end– a Roman crucifixion, hung up naked with metal spikes through the  feet and wrists to suffocate in agony over hours or days– this he felt to be a just punishment, for what he’d been in his life.

That’s how bad the “Good Thief” was.

You wouldn’t have liked him, if you’d met him, and you would have been right. This isn’t a matter of being unforgiving and prudish, as we might think of the people who turned up their noses at the repentant woman who washed Jesus’s feet. This isn’t a matter of regrettable prejudice between old enemies, as when Jesus dared to speak to a Samaritan. This isn’t selfishness like running from a leper. This was common sense, because the Good Thief was an evil man.

Torture and direct killing are never just acts, but if they ever were, they would be for the two men who were crucified with Christ. These men were evil. Of this we can be sure.

We don’t know anything else about them. Tradition holds that the good thief’s name was Dismas, and his partner in crime was Gesmas, and that they were thieves, murderers, evil men. So evil that a Roman crucifixion felt like justice.

But when they were crucified, they both found the Lord there with them.

And how we respond to the Lord is our own choice.

Gesmas did exactly what the Pharisees on the ground were doing. Gesmas imitated them; he did what the people assured of their own holiness were doing. He mocked. “If you are the Messiah, save yourself and us!”

The One who is Holy did not answer, just as He did not answer His detractors. He may have had any number of beautiful things He wished to say to Gesmas, but He did not say them. Grace cannot be forced, even by the almighty God. Grace must be freely given or it is not grace, and Gesmas did not choose grace. He chose to mock. The Lord will not return mockery for mockery, nor will He show His power out of pride. The Lord is good– He is mercy, compassion and love. There is nothing of retaliation or vainglory in Him. So He had no response. But He remained there, suffering with Gesmas, and so He remains suffering with us.

Perhaps it was the Lord’s silence that filled Dismas with shame, but somehow or other, Dismas was filled with shame. He saw who he was and how evil he had been. I don’t know if he saw exactly who the Lord was; I don’t know what he knew. But he saw that he himself was guilty and the One suffering with him was innocent. And he said so. And, whatever he understood himself to be saying, Dismas made his sincere act of contrition the God he’d never known.

“Remember me, when You come into Your kingdom.”

“I say to you, this day you will be with Me in paradise.”

This is what the Lord presents to us, in the second of His seven last words: that there were two evil men, so wicked that their crucifixion seemed like a good thing, and one of them went with the Lord to paradise. One of them is recognized as a saint. One of them is known as the Good Thief.

And Jesus granted mercy. Jesus granted the whole of the Beatific Vision to that evil man. There can be no doubt of this. We do not know if any human soul is in hell, but we know from the Lord’s own word that the Good Thief is in Heaven.  This day you will be with me in paradise.

From that moment until He comes again, there can be no doubt of the Lord’s mercy. No matter who you are or what you’ve done, when you turn and notice Innocence suffering with you– when He allows you to see who you are and how you have fallen from what you ought to be– you will be allowed to choose how to respond. You can do what the ostensibly holy  people assured of their own righteousness are doing, and mock Him. Or, you may repent. You may ask Him to remember you, and He will. And He will say to you, “You will be with me in paradise.” No matter what you’ve done, how much time you’ve wasted, however much punishment you at some level merit– even on the last day of a life horribly spent– you may repent.

And Innocence Himself will say to you, “This day you will be with me in Paradise.”