Mary Was A Saint 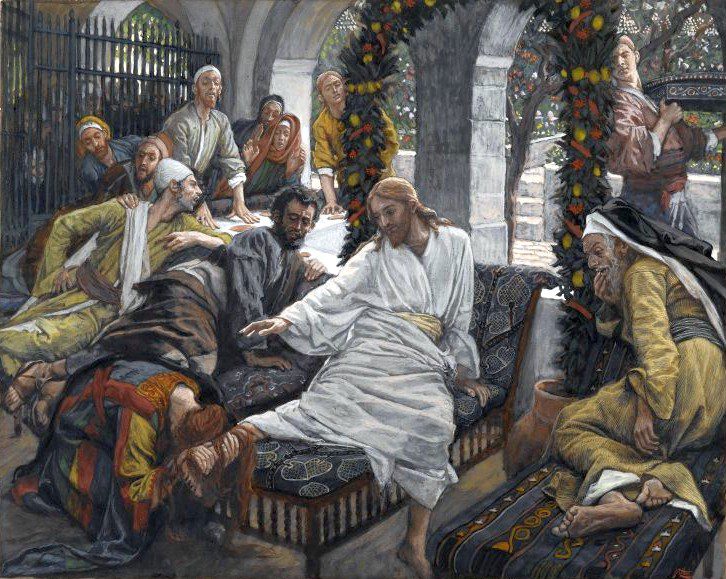 From the Holy Gospel for Monday of Holy Week:

Six days before Passover Jesus came to Bethany,
where Lazarus was, whom Jesus had raised from the dead.
They gave a dinner for him there, and Martha served,

while Lazarus was one of those reclining at table with him.
Mary took a liter of costly perfumed oil
made from genuine aromatic nard
and anointed the feet of Jesus and dried them with her hair;
the house was filled with the fragrance of the oil.

Good girls sit in the back where they won’t be seen.

Modest girls keep their hair up and don’t play with perfume.

Sensible girls keep out of the picture and let the important people talk.

Saints rush forward and pour perfume on the Lord’s feet. Saints find they’ve forgotten a towel, and rub it in with their hair instead. Saints fill the room with a cloud of fragrance, and sensible people are annoyed.

Judas kept the money purse, and skimmed a little for himself. A treat well earned, he thought. He’s the one who does the practical work and he takes a nice bonus for himself. Gotta look out for Number One.

“Why was this oil not sold for three hundred days’ wages and given to the poor?”

But Jesus was poor.

He’d never had much to begin with– a refugee child going back and forth across the border, the son of a manual laborer. He took over His foster-father’s carpentry work, but that didn’t make Him rich. Then He gave up everything to go from town to town, preaching and healing. He had nothing of His own and no place to lay His head. He took lodging where He was welcome and ate what was set in front of Him– at the house of Simon the Leper, Zaacheus the tax collector, Peter the boisterous fisherman whose mother-in-law was sick with a fever. He walked from place to place. His feet were dirty. They smelled.

Mary anointed the feet of the poor man, the dear friend of the family who had nothing of His own but who blessed them more than anyone ever had. She anointed them with a whole jar of the best perfume– a luxurious treat for a rich man staying in a wealthy house, poured all over the dirty feet of an unemployed carpenter.

Judas was a practical man and a grown-up. Why wasn’t this oil not sold for three hundred days’ wages and given to the poor? Lots of poor. A  pittance for each beggar. A scrap of bread for every one of them– and for himself, a feeling of virtue for a job well done. Plus a little bit of money for Judas, who looked out for himself.

Jesus was poor. He was going up to Jerusalem to die, and He knew it. His days were numbered. It was going to hurt. But that night he reclined at table in the House of Lazarus, comfortable, clean, well-loved and reeking of the best perfume.

Mary wasn’t practical or mature. Instead, she was a saint. She only thought to love the poor man who was her friend, and make Him comfortable.

And Jesus said, “”Leave her alone. Let her keep this for the day of my burial. You always have the poor with you, but you do not always have me.”

We will always have the poor with us– and this is mercy, because the poor are Christ for us. When the poor come, it’s not enough to give them a pittance and skim some off for yourself, like Judas. When the poor come, we must follow the example of Mary, who was a saint. Welcome them. Befriend them. Sit them at our table and listen to them. Receive every blessing they give us with their presence. Load them down with treats they can’t afford.

Jesus was poor, and remains poor, hidden among us in smelly people who can’t pay us back.

Judas was sensible and looked out for Number One. In the end, he found that selfishness too painful to bear; he returned the price of blood and became poor. And not having learned to value that poverty, he hanged himself.

Mary was a saint.

Let us pray for the grace to be Mary.