Blessed are We Who Have Not Seen 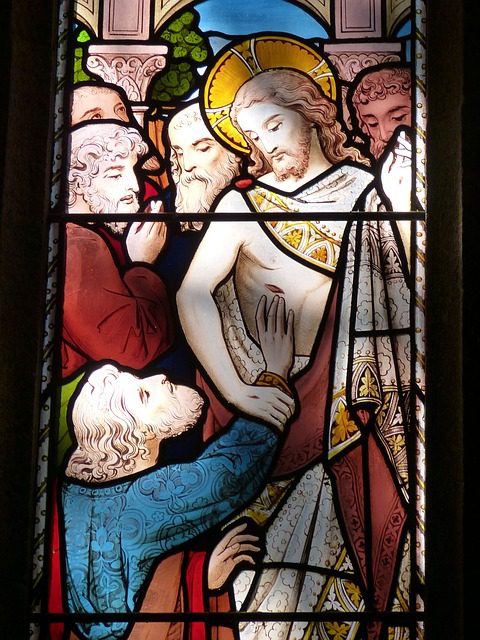 On the evening of that first day of the week, when the doors were locked, where the disciples were, for fear of the Jews, Jesus came and stood in their midst and said to them, “Shalom.”

That was the first word that Jesus Christ said to His apostles, after raising from the dead: Shalom. Shalom means peace; it also means harmony, wholeness, completeness. In addition, it was the local idiom for “hello”  or “hi.”

Jesus, who had been abandoned by His best friends and publicly lynched, appeared to those friends while they were were still hiding from the lynch mob. They weren’t out getting myrrh to see Him properly buried; the holy women were doing that. They weren’t mourning by the tomb; Mary Magdalene was doing that. The apostles were sorry for what they’d done, but they were doing nothing useful, heroic or even particularly repentant. Mary Magdalene had even come and told them that the Lord was risen, but they didn’t believe her. They stayed in hiding.

And He appeared in their midst and said “Hi.”

When Simon Peter had first met Jesus, in his shame he’d said “Depart from me, Lord, for I am a sinful man.” Jesus had responded, “Don’t be afraid.” Years later, Simon Peter had denied Christ, committing apostasy, three times before cockcrow and then run off in even worse shame. He was a failure and a traitor, as bad as Judas in every way. Judas hanged himself and Simon Peter hid. He didn’t come back to the foot of the cross; he hid. After His resurrection, Jesus went to where Peter and the others were hiding and said “Hi.”

He showed them His hands and side, and He said again, “Hi. Shalom. Peace be with you.”

He forgave their failure, their treachery, their cowardice, so completely and immediately that He didn’t even mention it. He got straight to the point. “Hi. Hello. Here I am. I wish you peace. I wish you wholeness. I wish you harmony, tranquility. Shalom.” He breathed on them, His breath of life, just as His eternal Father had breathed the Ghost into Adam, and they were healed of their fear.

But Thomas called Didymus was not there when He came.

Thomas Didymus came back later. The others told him what they had seen, but he didn’t believe it. He gave the apostles a taste of their own medicine, disbelieving them as they had disbelieved Mary Magdalene. And it’s hard to blame them. The story was nonsense on so many levels. Dead men don’t rise, just for starters. And if they do– if something, the undead specter of a murdered man, comes back from the grave, He wouldn’t say “hi” and breath life into the traitors who did this to Him. And if Christ was truly God– God somehow in flesh, then murdered and come back from the dead– who could have the courage to believe in forgiveness that gentle and complete? Surely He’d return in vengeance, not Shalom. Thomas was well within reason to say that he would not believe unless he saw with his own eyes and touched with his own hands.

So Jesus came again, the next Sunday.

And then he turned to Thomas. “Put your finger here and see my hands, and bring your hand and put it into my side, and do not be unbelieving, but believe.”

Thomas answered, “My Lord and my God.”  God beyond all praising. God beyond all telling. God whose mercy and compassion are beyond anything we could have imagined. He broke our chains of slavery and we sold Him to the San Hedrin. He led us out of Egypt and we led Him before Pilate. He anointed us a chosen race, a royal priesthood, and we gave Him over to be crucified by our despised conquerors. Then we abandoned Him. And He came back and said “Shalom,” but I couldn’t believe. So He came to me, and said it again. My Lord and my God.

And Jesus said, “”Have you come to believe because you have seen me? Blessed are those who have not seen and have believed.”

That’s us. The other failures, the failures who weren’t in the room on that evening. The ones who would betray Him again and again, over all the years until He comes in glory. Blessed are we who have not seen, and have believed. Blessed are we who, after the first fervor of our conversion, have denied Him and run away. Blessed are we who hid ourselves in the upper room, repentant and ashamed but not daring to think He could let us off so easily. Blessed are we, because the Lord will come to us, whenever we repent and however imperfectly we do– that He will bid us Shalom and breathe the Ghost on us. Blessed are we who are as bad as Thomas was but didn’t see what Thomas saw. He will come to us as well, with His forgiveness and His breath of life.

The Lord has returned triumphant from the dead. Go and tell the news through all the earth. He has spoken the ones in hiding, and His Word is “Shalom. Blessed are they who have not seen and have believed.”