“The Counter-Revolution” and The Spirit of the Antichrist

“The Counter-Revolution” and The Spirit of the Antichrist May 7, 2018 Mary Pezzulo 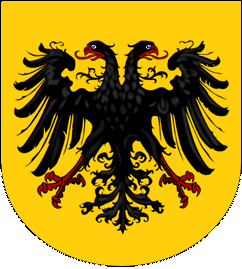 Lately I was in an argument with a person who was very fond of Saint Thomas, and who kept insisting that rape is actually a form of fornication, an act of sex instead of an act of violence. I could not get through to them, try as I might, and eventually I stopped trying.

This person had, in the top right-hand corner of their profile picture, a tiny emblem with a two-headed spastic eagle on it.

I have seen that eagle around. It could be my imagination, but I feel as though I get into more and more arguments online lately with people who have funny two-headed spastic eagle emblems in the top right-hand corner of their profile picture– or that same eagle in a much larger form as their cover photo. I had never seen it before until a few months ago. Now it’s cropping up with increasing frequency, like the gathering flock of crows in Hitchcock’s The Birds. I’m beginning to feel like Tippi Hedren again, and that’s never a good thing.

I asked my friends who are much brighter than I am what it meant– was it to do with Germany? When Michael and I were engaged, a family member mailed him a set of several identical military surplus jackets labeled “Bundeswehr,” each sporting the emblem of an eagle. But this eagle had only one head, and had somehow balled its wings into intimidating fists. A single-headed eagle putting up its dukes is the symbol of the modern German army. This one was similar but not identical to the above photo: a two-headed eagle, not putting up its dukes, with its feathers all standing on end as if it had had a bad scare. The German eagle is sticking its tongue out in a show of bravado. This eagle’s twin heads are sticking out their tongues with an expression more like nausea. One of its heads sports a bishop’s miter and one has a crown.

None of my friends were sure what the two-headed eagle meant, at first; then my friend Mitzi hand the answer. She directed me to a website which was essentially a giant game of “What’s Wrong With This Picture?”

You have a look yourself. I’m told the website is completely invisible to smartphone users, so that half of my readership will have to just imagine it. The rest of you, take a gander.

The two-headed nauseated bird, as it turns out, stands for a… social movement? Alt right group? Attempt at a political third party? They’re really not clear. In any case, they’re an outfit known as “The Counter-Revolution.”

“Counter-Revolution against what?” you might well ask. The answer seems to be, against just about everything. As far as I can tell beyond the flowery language and complete lack of a coherent set of concrete policies, the “Counter-Revolution” seeks to establish a strict Traditionalist Catholic monarchy which will span the whole earth and involve a lot of Renaissance cosplay. They don’t provide a coherent plan for the establishment of this monarchy, just “Five Points of a Catholic Counter-Revolution” and an ongoing blog about things they hate.  This is the most thorough counter-revolution in known history. They’re vehemently against abortion and usury, and so am I for the record. But that’s the only bright spot.  They are against every historical development right back to “the fall of Man and the human passions.” They don’t like the Magna Carta,  the Novus Ordo or people who dis the Medicis. They oppose free speech and democracy.

They don’t even seem to acknowledge the two natures of Christ, based upon a Good Friday blog post where they call Him “the Divine with a bodily veil,” as if Christ were a tube of human flesh all stuffed with Divine toothpaste instead of fully God while at the same time fully Man. But maybe that’s just bad poetry.

Of course, The Counter-Revolution doesn’t hate everything.

May 9, 2018 Seven Steps to a Catholic What?
Recent Comments
0 | Leave a Comment
Browse Our Archives
get the latest from
Steel Magnificat
Sign up for our newsletter
POPULAR AT PATHEOS Catholic
1

Catholic
When I was Brave
Steel Magnificat
TRENDING AT PATHEOS Catholic