Evening in the Gardens of LaBelle 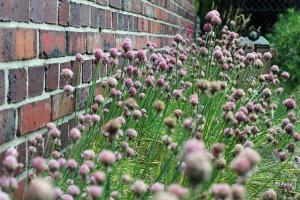 The day’s heavy rain cleared up while Michael was running errands with Rosie. It was too beautiful to stay inside, writing. It looked like the right conditions for a rainbow, and I wanted to be outside to see one.

I went for a walk.

I left on a whim, without my cane or my purse where I keep my pepper spray. This turned out to be a mistake.

There was no rainbow over the LaBelle neighborhood just then, but there were other delights.  I don’t like living in Steubenville, but there are still plenty of beautiful things, for those who know where to look. I listened to the church clock striking the Angelus from all the way downtown, and I prayed. I enjoyed the late afternoon sun and admired the clouds.   I found a jumbled hedge of wild black raspberry bushes at the edge of a vacant lot, all tangled up with poison ivy and nettles. I admired the gardens– there really are some beautiful gardens here. I saw abundant rose bushes and jaunty tiger lilies in full bloom. I sniffed the honeysuckle that crowded over the path.

I was careful to walk on the opposite side of the street when I passed by some loud, intoxicated men on their porch. Just in case. I’ve found it relatively safe here, but things happen. I kept my distance from angry-looking people playing loud music.  I stayed away from a grouchy-looking man walking a very large dog. I didn’t go down a certain street entirely. Just the usual precautions.

Every neighborhood has its scruffier parts, and LaBelle is about 70% scruffy. It’s also more than 70% poor. There are some upper-middle class people here who seem wealthy compared to the rest of us. Some of these are very kind, but a sizable and vocal number aren’t. They blame LaBelle’s poverty for its crime, and they don’t want to help the crime rates by helping poor people. They’ve said the poor are dangerous and responsible for making the neighborhood unsafe for their own children to play in. They’ve managed to pass ordinances in the town council to discourage the poor from renting here.  Other folks around here don’t like people of color. When I moved into my current rental house, somebody wanting to assure me it was a safe street waved his hand at the neighboring houses. “It’s a safe block. White people live here, white people here, white people over there,” he’d said, to my horror.

As for me, I’ve noticed that the dangerous people of LaBelle are as likely to be white as not, and as likely to be poor as not. Race certainly never made anyone evil. Poverty doesn’t make people evil either. Sometimes it makes people desperate, and desperate people will commit crimes if they think it will help. But mainly, poverty makes evil harder to hide.  Poor people can’t afford to hide their mistakes. They can’t rebuild burned-down houses or get cosmetic surgery; they can’t hire a really good lawyer or get into a good rehab.  The richer you are, the more gloss you can afford to put over your faults.

I emerged from the shabbiest part of the neighborhood to the middle-class part, with the beautiful old Victorian houses. There are some truly lovely houses there. I admired the gardens and the shady trees as I passed down Oregon avenue.

That was why I didn’t notice the children until it was too late.

I passed a lovely yellow house with a perfect manicured garden. Six or seven young, well-groomed children in clean clothes were sitting on the front lawn, loudly playing. These children looked to be siblings; their light brown hair was all the same. They definitely weren’t poor– and for the record, since some blame LaBelle’s crime on race, they were white. They didn’t have an Appalachian accent or any of the other marks of being from the wrong side of LaBelle. This was their neighborhood. I was a stranger.

As I passed, one little girl said “Let’s follow her.”

And they did, all of them.

All the children parroted her, repeating what she said and worse. The boys were more explicit; a boy who looked about eight kept talking about how much he wanted to have sex with me, only he didn’t call it “sex.” He didn’t seem to have a very good idea of how sex worked, and the anatomical couplings he asked for were shocking. They followed me down the block in this way,  right up behind me until they were practically beside me, in grabbing distance and then even closer. They filled the sidewalk and spilled onto the berm, crowding me. There were enough of them that they could’ve knocked me over at any second, and they acted like they wanted to.

There was no side street down which to run away.

There was no one to help me on any of the porches I passed, and the children were getting more explicit.

I had nothing to defend myself with.

I tried to pick up a brick that was lining one of the flower gardens, thinking it could help shove their hands away when they grabbed me; I hoped it would at least make me intimidating.  Of course, in my fear, I dropped the brick back into the flowerbed. I am not intimidating and don’t know how to be. If I did, I wouldn’t end up in situations like this in the first place.

They kept taunting, and they kept following, not decreasing their distance.

“DO YOU WANT SOMETHING?” I asked in my loudest bellow.

“No,” said one little boy, grinning like Lucifer as the other children chanted insults. “We’re just walking this way.”

They slid past me, still repeating obscenities and also threatening to tell their parents about my moving a brick that didn’t belong to me.

I went home as quickly as I could, to the shabby poor side of LaBelle where I’m told all the trouble comes from.

They really are beautiful gardens.