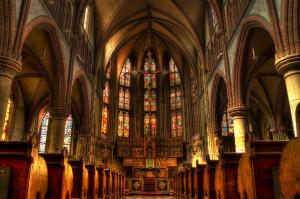 For awhile, we were in a parish with two rival homeschool groups. One was led by a well-dressed rich lady with mile-high hair and astonishingly unruly children; the other was led by my mother and her friends. I don’t know that my mother and her friends ever thought of themselves as the rich lady’s rivals, but that wasn’t the rich lady’s opinion. There was a long, drawn-out turf war of the most tiresome kind in the parish; the kind of passive-aggressive sniping and posturing it’s impossible to understand unless you yourself have tried to get anything done in a Catholic parish and fallen afoul of a well-dressed lady who is friends with the associate pastor.

One day, by some deception or other, one of my mother’s friends got ahold of a copy of the “official mission statement” of the other homeschool group and passed it around. My father read it aloud over dinner. It was hilarious; it read like a parody of the Rule for a draconian religious order and not a group of moms trying to educate their children. The rich lady kept referring to herself as “The Committee–” there was paragraph after paragraph about “The Committee,” obedience to  The Committee, no changes being made without notifying The Committee. Parents were not to go against the rules of The Committee. Children were to obey The Committee “with a cheerful, respectful demeanor.” My father started calling The Committee “The Triumverate” and pretended the rich lady was Stalin, which suited her.

The last words of the mission statement were a severe declaration of “above all, docility to Mother Church.”

Docility to Mother Church. I had never heard the phrase before. I could tell by the way it was written that it came from somewhere– the Catechism, maybe. It was one of those things you were supposed to know, like grave matter, full knowledge, deliberate consent or to know, to love, to serve God in this world. One of those phrases you memorize and spout at the right times if you’re the “right” kind of Catholic. But it wasn’t one of the ones I, personally, had memorized yet.

At first I laughed at the thought that this particular woman could be docile to or about anything. As if she wouldn’t try to pick a fight with the Angel Gabriel if he ever tried to speak to her.

Then I pondered that dreadful phrase, “Mother Church.”

I have been pondering it ever since.

The Church is our mother.

I’m not a theologian. But it seems to me there are two mothers, in my experience, when I think of the Church. The first is the Church as God sees her, the Body of Christ of which we’re all blessed to be a part; the way Christ mothers us. He gestates, nourishes and teaches us through the sacraments and the teaching of the Church, and there’s nothing bad about that. That’s Heaven come down to earth through an act of love; that’s the Incarnation; that’s the Mystical Body of Christ, the Church, my Mother. I was never very good at those homeschool Catechism lessons, but as I understand it, that’s who the Church is.

But there is another church, another mother, and she is the one I see. While the Church, the Mother the Lord created for me on the rock of Peter, is nourishing the deepest part of me in the very inner court of my interior castle, the other church is apparent to me before my eyes. This is the culture I’ve lived in since I was baptized at one month old. This is the church where I went to the monthly all-school Mass in the first grade,  when  we still went to Catholic schools; the church where the music teacher made us act out the psalm with hand motions and liturgical dance every time. This is that other church with that horrendous Monstrance that looks like an electric fan, or the church where I had to do a 180 turn away from the altar to genuflect to the Tabernacle in its horrible little wood-paneled room. This is the communion rail with traditional Catholic symbols embroidered on the kneeler cushion.  This is the miserable confessional whose “screen” afforded no more privacy than a chain link fence or that other nifty confessional where you couldn’t see a single thing.  This is that beautiful weird church in Florida, the only church I’ve been to with a modern design and weird abstract art that was actually reverent and haunting instead of transgressive.  This is Saint Denis, Chartres and Notre Dame– Notre Dame De Paris, which I studied for an essay on Gothic cathedrals when we homeschooled, but also the chapel at Notre Dame in Indiana where I once had a numinous experience.

This other mother is people, and some of those people are wonderful. My kindergarten teacher, a four-foot nun named Mary Thomasina. The friends I’ve met at The Friendship Room.   The nice lady I knew from the Charismatic Community– the one who took me to her house to make crafts and tend her fish pond once a week because she knew I was a lonely child. My husband and my brilliant daughter.

This mother is also the Catholic school named for Our Lady of Peace where the bullies who usually only constantly called me names pushed me into a corner and gave me “spider bites” all over my arm, but I was too afraid to tell the teacher. It’s the two rival homeschool groups and that ridiculous woman my father compared to Stalin. It’s my own mother, my mother according to the flesh, berating me for being the worst child she ever had until I ran to my room and begged Jesus to let me die, time after time, but He didn’t. It’s That Priest who gives the terrible witness, That Family that was so antagonistic, That Public Figure who despises the poor and calls it piety, That Politician. These are also mother.

June 20, 2018
What's Happening at the Border? Answers to Common Questions
Next Post