Gentleness Has No Gender 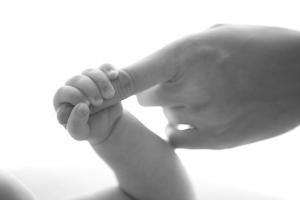 After Rose was born, we were a mess.

My abusive disaster birth left me even more shattered and exhausted than childbirth usually does to women. It left Rose in the nursery overnight under observation with a high white blood cell count; I wasn’t allowed to visit or nurse her until morning. In the morning, we had to hold her down to get her heel pricked for another test, which is surprisingly difficult for an eight-pound infant. She fidgeted at the last moment and they had to prick her again, and again. They had to do it again five times. I kept thinking of the Five Wounds of Christ.

Michael was holding Rosie still along with me, whispering.

He’d gotten it into his head that the baby couldn’t understand anything as complicated as “Mommy’s here” or “it’s okay.” He tried to think of a monosyllable that comprised all of that at once, and whisper it in his gentlest voice over and over to the baby.

Rose managed to go still just long enough. The needle went into her heel; she screamed.

The nurse got her tiny drop of blood, and left.

Michael doesn’t have any little siblings. He didn’t grow up with small children around, except for himself. He read comic books and watched science fiction movies.  When I talked about the babies and little children I’d known back home, he responded as if they were creatures he’d never heard of. I didn’t ask him how he knew just what to do to calm a terrified newborn, when I didn’t.

They wouldn’t let us go home from the hospital until they had inspected our brand new car seat and had us sign a form promising we’d never shake Rose even if we got frustrated. I said something to Michael about shaken baby syndrome, in case he’d never heard of it, and he looked at me as if the idea was preposterous. Why would anyone be rough with a baby?

When we got Rose home, she had colic. From midnight until five in the morning, she was inconsolable. I don’t think anyone in the apartment building got a minute of sleep during those hours.

The parenting book I’d read cover to cover said to rock the baby in a rocking chair at times like these, but we hadn’t been able to afford a rocking chair, and the con artist midwife’s accomplice had taken the vibrating bassinet that was supposed to be so comforting. I rocked Rose on the edge of the bed, over and over, singing and chanting “Here’s Mommy. Here’s Mommy,” until I couldn’t stand it anymore.

Eventually he returned her to me, and we all fell asleep.

Michael hadn’t touched the parenting book before Rose came. I don’t know where he learned to pace the floor with a tiny screaming person and sing about peace and comfort. He just did it, because it seemed like the right thing to do. It seemed like it would comfort her, so he did it, and it was really that simple.

I don’t think we as a society have enough wonder and awe in response to gentleness. Gentleness is nothing short of an awesome thing, a manifestation of the grace of God.

Gentleness is not, strictly speaking, a practice that can be taught. It can be modeled, but not taught. Gentleness can’t be mandated through the signing of forms in the hospital– though those forms have their place, of course. Gentleness can’t be learned from a parenting book. Gentleness comes directly through Divine intervention, because gentleness is a fruit of the Holy Ghost. The fruit of the Spirit is Charity, Joy, Peace, Patience, Kindness, Goodness, Faithfulness, Gentleness and Self-Control. All of these are sacred, gifts from Heaven. They are not earthly, human things. They are Divine.

The Holy Ghost is not male or female, and neither are the fruits of the Holy Ghost. There is nothing inherently feminine about  fruit like gentleness anymore than there is anything masculine about a cardinal virtue like fortitude. The greatest display of fortitude ever shown by a non-divine person was Our Lady’s fortitude, suffering Our Lord’s passion with Him at the foot of the cross. But she was not masculine. Nor was Jesus feminine when He healed the wounded, pardoned the adulterous woman and forgave the paralytic man. Christ, meek and humble of heart, Whose yoke is easy and Whose burden light, is infinitely gentle. He isn’t effeminate. To be feminine isn’t a bad thing, but He isn’t anyway. He is just Himself.

The virtues, the gifts and fruits of the Holy Ghost, are all wondrous manifestations of the presence of that Spirit among us. They are mercies we should all beg for and practice however we can. To be gentle is a brilliant, miraculous, glorious thing. A man who is gentle is not acting like a woman. He’s acting like Christ.

Today I read a very silly article written by a priest, who claimed that gentleness was effeminate. He was speaking, specifically, about the film Brother Sun, Sister Moon, which I also dislike for the record. But he blamed the film for everything that’s gone wrong in the Church including the Child Abuse crisis. He called the admittedly annoying Saint Francis character portrayed in that movie a “sissy,” and says that the Jesus Christ portrayed in Zeffirelli’s other film, Jesus of Nazareth, is also a “sissy.” He thinks that Christ and His followers ought to be manly, warrior types, not nature-loving hippies who are kind and gentle to people. The gentleness portrayed in those films he calls “milquetoast Christianity,” and blames on Victorian sentimentalism and the Second Vatican Council.

I can’t imagine anything further from the truth.

The followers of Christ are sealed with the gift of the Holy Spirit. The fruit of the Spirit is Charity, Joy, Peace, Patience, Kindness, Goodness, Faithfulness, Gentleness and Self-Control. The Holy Spirit cannot be divided. There isn’t charity, joy, peace and patience for all the male Christians and goodness, faithfulness, gentleness and self-control for the females, making gentleness a sissy, effeminate trait unbecoming of a male saint. We all ought to beg the Holy Ghost for the grace to be gentle.

A man who is gentle is not a sissy.

He’s certainly not responsible for the Child Abuse Crisis. Abuse is the opposite of gentleness.  Abuse is one of the things that happens when the Holy Ghost is not welcome. It has nothing to do with being feminine or masculine– though a preoccupation with whether one is masculine enough might make a man fear to be gentle, and being abusive might be one result of that.

Gentleness has no gender. Gender is a human thing. Gentleness is Divine.

August 23, 2018
Something Rotten in the Diocese of Arlington
Next Post

August 26, 2018 My Thoughts on the Viganò Testament
Recent Comments
0 | Leave a Comment
Browse Our Archives
get the latest from
Steel Magnificat
Sign up for our newsletter
POPULAR AT PATHEOS Catholic
1