A Legacy of Scandal: Sheltering Abuse at Franciscan University 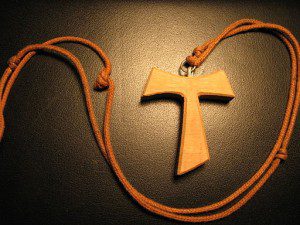 I know that I have been less than complimentary about FUS. I had a horrible time there. But I genuinely loved Father Mike.

He used to pray with me and anoint my forehead with blessed oil. Then he’d hug me and give me a kiss on the forehead; then he’d bless Michael, who was only my boyfriend at the time and who always came to meet me after I had spiritual direction. I invited Father Mike to my wedding, though he didn’t make it. Father Mike tried to defend me against the bullying priest I’ve referred to as “Father Reginald,” though it didn’t do any good. I loved him for trying. I was devastated but filled with hope that he’d gone straight to Heaven a saint, when I heard that he’d passed away.

And then the university admitted what some people have known for a long time: that the supposedly saintly Father Sam Tiesi, Father Mike’s best friend, was actually a sexual abuser.

Today, we have more confirmation that, whatever he told himself to the contrary, he absolutely knew.

My friend Jenn Morson, herself an alum of Franciscan University, has published another of her investigative reports into sexual abuse and cover-ups at FUS.  This one is the testimony of  “Karen,” one of the young women Father Sam sexually abused. Everything being alleged fits exactly with the timeline of events that Franciscan University has publicly admitted to and that other people have alleged; there really isn’t any question in my mind that this woman is telling the truth.

And it turns out, according to her testimony, that Father Mike Scanlan was himself emotionally abusive to Karen. Much worse, in fact, than the TOR priest I ran afoul of was to me.

Father Mike was reckless with the safety of every woman at that university as well; every young woman attending school while Father Sam was at large was in danger, Father Mike knew about it, and Father Mike chose to protect his buddy instead of do his job and his duty as a Christian person. He let Father Sam get away with everything, not only by turning a blind eye but by active shielding. He did it, in part, by ignoring Karen– and then, when he couldn’t ignore her testimony, by putting the blame on her.

Thankfully I don’t know how it feels to be sexually abused by a priest. But I sure know what being bullied, gaslit, and bawled out by a priest feels like. I can only imagine how exponentially worse Karen feels.

And here I am with this terrible cognitive dissonance– that Father Mike, who was lovely to me, convinced himself he ought to be a monster to somebody else. This makes me wonder if it was pure malice and his kindness to me was all an act. Or, more likely, maybe he had a severe moral blind spot he just couldn’t see out of. Maybe Father Mike admired Father Sam the way I admired Father Mike and just couldn’t believe it– or some idiotic blind faith that priests just didn’t do that kind of thing and it was always the woman’s fault. That’s no excuse, of course, I’m not looking for excuses. There can’t be any. What he did was inexcusable. But I still want to understand.

All I know is that it happened.

This is why you have to believe victims. Not exclusively or irrationally, but simply in the sense that the testimony of a victim is, on first consideration, a form of evidence of wrongdoing. Further evidence might confirm, complicate, or even contradict it. But if you refuse to take it as evidence in the first place because you simply don’t want to, because it goes against your preconceptions, that’s a gross injustice. And it’s dangerous. You’d think Catholics would have figured this out by now.

This is also another example of why it’s good to be wary of Catholic celebrities that are treated as living saints. That kind of groupthink– the kind that assumes a member of the group is a saint and all evidence to the contrary must therefore be wrong– is easy to fall into. Some people can have a lot of charisma that looks like holiness, but only God knows who is holy. And that’s the way it’s supposed to be. Our job is to be faithful, not to judge our neighbors– and judging someone to be a saint is still a form of judging.

I no longer think Father Mike was a lovable kind man, though.

Please do pray with me for those he harmed, for his soul, and for everyone involved in this terrible mess. For me as well.

November 3, 2018 My Pro-Life Vote This Year
Recent Comments
0 | Leave a Comment
Browse Our Archives
get the latest from
Steel Magnificat
Sign up for our newsletter
POPULAR AT PATHEOS Catholic
1