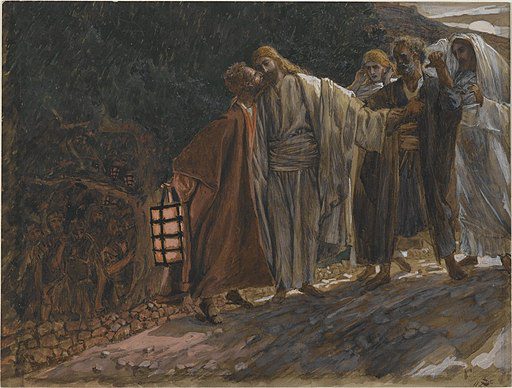 The meanings of the Passion of Christ are infinite. I couldn’t name them all here if I tried.

One of the things the Passion of Christ is, is that point in history at which Heaven and Hell met on Earth to do battle,  Heaven turned all of Hell’s weapons against it, and Heaven won by voluntarily allowing Himself to lose. The paradoxes in such a Moment are more than I can ever list. This is one of them: the apostle who appeared to be doing everything right was the traitor.

The apostles who meant to do right had failed. They were fast asleep. Jesus went and begged them to stay awake, but they fell asleep again. They didn’t do the one thing He asked of them, and they were ashamed, but could think of nothing to say.

Now, here comes another apostle, an apostle who is not asleep. He’s probably kept vigil all night just as Christ has. And he’s got the guards with him, the soldiers arranged by none other than the High Priest. What wonderful people to have on your side.

He doesn’t stand there mute, looking embarrassed. He walks up to Jesus and kisses Him– reverent, affectionate, so polite. The other apostles are rubbing the sleep from their eyes, embarrassed as well they should be. Judas is wide awake and kissing the Lord. At this moment, if you didn’t know why he was there, you’d think Judas was the Lord’s very best friend.

And then the guards arrest Him. The apostles flee. Chaos reigns, and Hell seems to have the upper hand.

This is our first lesson: God does not see as man sees. Things are not always what they seem to be on the surface. The one who appears to be doing everything right is often the one who works the worst mischief.

Now, look at the apostles. They are all failures. They all betrayed the Lord. Judas kept appearances up the longest in order to sin and get paid for it– a true follower of the Prosperity Gospel, rather than the Gospel of the Lord. But they all abandoned Him. One ran off naked. Peter, the Rock on whom the whole Church was to be built, flailed around with a sword and made a fool of himself; he went on to betray the Lord three times, to commit that unimaginable blasphemy and swear in full sight of the people that he didn’t know Christ at all. All have sinned; all have fallen short; all merit eternal damnation.

What matters is what happens next.

What we do when we realize our betrayal, is up to us.

Judas, the unhappy wretch, one of twelve unhappy wretches in a world of wretches every bit as unhappy as he is, realized his sin. He went to the priest and confessed; he returned the money he had earned through his transgression. So far, his repentance was good. So far, we should all imitate him.

But after that, he failed to trust in the Lord’s mercy. He didn’t go and follow Christ to Golgotha, repenting. He could have, but he didn’t. He went away and hanged himself.

Better for him if he had never been born.

I don’t know what happened after that. Our faith doesn’t require that we believe anyone is in hell. That’s none of our business. It is our business to recognize the ways in which we ourselves have betrayed Christ. The stories of other people’s sins that are handed down to us in the Gospel, are handed to us for that reason. We may be the apostles who appear, on the outside, failures; the ones who fell asleep and then ran away. Or we may be that other kind, the apostles who look as though we’re doing everything right as we betray Him. What we know for certain is that we have betrayed Him.

We must not be afraid to repent. We must not be too proud to go to Golgotha and look the results of our transgression in the face.

Better for us that we’d never been born, than that we run away from Golgotha.

Come to Golgotha with me. 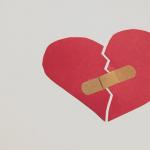 April 4, 2019
"Healing Our Church" Will Not Heal the Church
Next Post 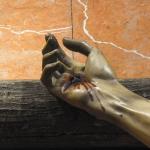