Would to God I had Died

Somehow, one afternoon, I ended up on a bench in Fort Steuben Park.

I decided to pray as I walked around downtown instead. I wandered down Fourth Street, humming Sacred Harp hymns.

That was the one I was humming, as I wandered into the park.

The bench was pleasant in the sun. The grass was bright green, and there were several noisy robins that weren’t frightened to hop close to my feet. If I’d been extremely nearsighted, I could have imagined that I was in a different town in a much better part of the country.

Before me, at the bottom of the grassy hill, was the highway, and beyond the highway the railroad track. A fracking train rumbled through, droning its horn.

Beyond the fracking train was that apocalyptic ribbon of rust and poison that is the Ohio River. It appeared still, but if course it moves rather fast– past Toronto up to the north of me and then Weirton, then down past Follansbee to the south. I’m told this was the most dangerous part of the river to navigate steamboats on a hundred years ago, due to the zigzags.

There aren’t any steamboats on the Ohio now, except to please the tourists on much nicer parts. Here there are only coal barges. The river is still dangerous, however, and still claims the occasional life. A few days after I first came here, nearly thirteen years ago, two young men got drunk and jumped off a bridge into the Ohio for a prank. It took quite awhile to find the bodies.

I hadn’t thought of that tragedy in years.

Would to God I had died for thee, O Absalom my son.

I watched that great big plume of white smoke that billows up several times daily over Follansbee. Against the blue sky it was eerie, dreamlike. The first few times I saw it, I panicked; I thought there’d been an accident or a terrorist attack. Now I’m used to it. Some places have skyscrapers and some places have mountains. Here in Steubenville, we have a column of smoke that appears to the southeast every so often. That’s been true for as long as I’ve lived here.

Other things have changed. They restarted the electric arc furnace in Mingo, across from Follansbee, a few months ago, and Michael swears his asthma’s been a little worse ever since. They completely demolished the old plant in Weirton across the river– imploded it, badly, breaking the windows of nearby houses and spreading ash like snow around downtown. My friend who took her children to Liturgy of the Presanctified Gifts downtown that evening said you could taste metal and plastic in the air– her children had to cover their mouths on their way into church.

My friends who lived here forty years ago say that everything used to be covered in dust like that. Everyone had asthma like Michael does, but nobody knew they had asthma because wheezing was the whole town’s normal state. The Dominican nuns who taught school had to have permission from their order to wash their white habits twice a week instead of once, because they turned gray just from living near the mills. And all that soot and pollution is still here. It’s under the grass at Fort Steuben park. It’s in soil where I grow my backyard vegetable garden.

It’s in my house. Once, after a terrible rain storm, a tile in my bathroom ceiling gave way and fell in. A few balls of glistening black debris fell with it; I looked up, and saw that the floorboards of my attic were jet black. I panicked, thinking it was mold, but then I smelled it–it smelled just like charcoal. I rubbed some of the debris on the back of the tile that had fallen, and watched it make a streak just like my artists’ pencils. It was charcoal– or coal, the coal dust that permeated the air for so long settling in the rafters of the building. I was looking at congealed air.

And if we somehow get all this environmental destruction under control before it kills us, the people of the Ohio Valley will be the ones fighting it every step of the way. They want the pollution to come back, because they think it will bring lasting economic prosperity. It didn’t before; there was a boom and then a bust, and the factories went overseas where it’s cheaper to run them. But they’re sure this time will be different.

Would to God I had died for thee.

The smoke from Follansbee dissipated and was gone– not vanished, but invisible.

The river continued– rushing fast and treacherous, but appearing still as ever.

The robins continued hopping across the fresh green lawn that covers the toxic soil in a park that could have been anywhere else in the world, but wasn’t. 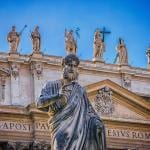 April 11, 2019
A Survivor Responds to Pope Emeritus Benedict
Next Post