A Word on This Weekend’s ICE Raids

As I write this, it is Saturday, July 13. The ICE raids planned for Sunday have already begun in Detroit and some other places, according to what I’m seeing online. Their goal is to sweep up thousands of families– men, women, children and infants all over the country. Families will no doubt be broken up and sent to those squalid and inhumane prison camps we’ve all been seeing on the news.

I’ve been trying for days to write something about this situation. I don’t know how to convince people who still don’t understand this is wrong.

But then my friend who is married to an immigrant posted the following status:

Here’s why the immigration raids planned for Sunday are terrifying for many immigrants, and why this concerns everyone:
Because our immigration system is so disorganized, it can be hard to even know if you actually have an order of deportation against you. Sometimes, the paperwork isn’t exactly clear, or is missing a letter. Sometimes, the government doesn’t have an updated address, so you never get your deportation notification. Sometimes the government doesn’t even bother to send you your documents.

This problem is so rampant, that when people go to file things like the hardship waiver, the lawyer has to find a roundabout way to inquire about deportation paperwork, and runs the risk of tipping the government off that an undocumented immigrant is trying to adjust their status. Just asking about deportation proceedings can trigger deportations. That’s enough to deter many immigrants from attempting to regularize their immigration status.

In addition, when ICE commits a raid, they attack anyone else around, and try to get the greatest number of immigrants possible. This leads to documented people (green card holders) as well as citizens being detained and terrorized. Even if you are released, you could be missing from work, your children will not know where you are, and your rights will be violated. It’s not unheard of to have citizens deported, especially now that the system “streamlines” everything.

This is what we’re talking about, when we talk about ICE raids. I’m not saying you shouldn’t be horrified about what happens to people who are here illegally and know it. You should, because it’s inhumane. But spare a thought for everyone else. Think of everyone in this country who has the wrong kind of accent, skin color or surname. Think of people holding valid green cards. Think of  people who have “waited their turn” and jumped through every hoop to be granted citizenship– people who are supposed to have the exact same legal rights as you do. Think of the children of immigrants, who look like their parents and speak their language as well as English.

Imagine how it would feel if you knew that, this weekend, you might be arrested and thrown in the back of a van not because of something you did wrong, but because you look like you might have been born somewhere else. Because you happened to be at the wrong place at the wrong time in public, while looking too tan or speaking Spanish to a friend. Because it turns out the relatives whose name are on the lease of the house you live in are undocumented and you have the same last name. Because they just got the wrong address. Because of a paperwork error.

And maybe they’ll take your spouse and children too, to separate facilities, and getting this sorted out will take a lot more work and trauma.

Maybe you only thought you were legal.

But no matter what happens, people who look at your plight will intone, “They should have waited their turn. It’s their fault for not following the law.”

That’s what’s going on, all over the country right now.

That’s what your fellow human beings, in many cases fellow citizens, including natural-born citizens who have never lived anywhere else, are feeling.

If you don’t see why this is unjust, I don’t know what to tell you. 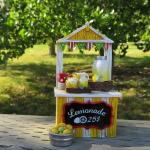 July 9, 2019
A Cool Idea to Help the Imprisoned Migrants
Next Post