For the Record, Anti-Semitism is Real

For the Record, Anti-Semitism is Real August 27, 2019 Mary Pezzulo 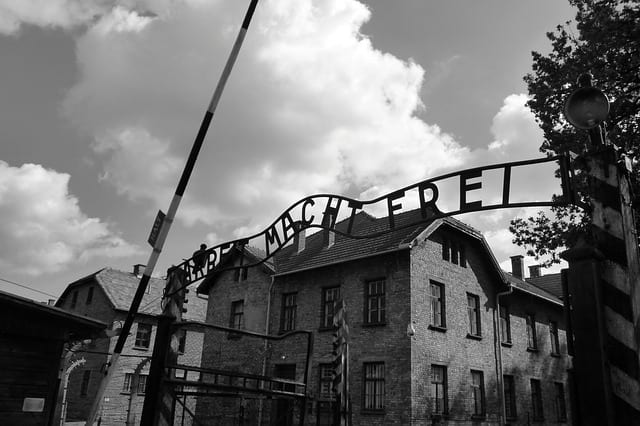 Sometimes I don’t write about something that’s important, because I feel I have nothing to say. Sometimes I have nothing to say because it’s a topic I know absolutely nothing about– the ordination of women deacons, for example. I don’t have the theological background to have a good opinion, so I try to shut up and listen. Sometimes I have nothing to say because I’m tongue-tied with panic and grief– the fires in the Amazon are giving me that reaction. It’s important to talk about them but I don’t know what to say. Sometimes I don’t say anything because somebody else said it much better and I don’t want to steal their thunder, and the past couple of days that’s how I’ve felt about the disturbing trend of antisemitism that’s cropping up again lately. My friend Rebecca wrote about it beautifully.  I didn’t feel I could top that, so I just liked and shared her post.

I, myself, don’t have the honor to be Jewish. There’s an annoying trope where white women like me are supposed to look back on our genealogy and tell you about the one relative we had who was something other than a white non-Jewish European so it looks like we understand being a minority, but as far as I know I’ve never had one of those.  People address me as if I’m Italian sometimes because I married a man who is half Italian, but I’m not Italian either. When I trace my family tree I find that a solid half of my relatives were WASPs or Westphalian Protestants who settled in rural Indiana, and the other half were Irish or Welsh Catholics who settled in West Virginia and Columbus, Ohio. A single one of them over two hundred years ago might’ve been from the very edge of the Eastern border of France, but that’s all. “Honest to God rednecks,” my friend says. That’s who I am.

But I have eyes. I can see what’s going on around me.

I’ve written once about antisemitic outbursts I saw in the comments here on Patheos.

You can say that’s just a random nut, if that’s what you believe.

We all know about the terrorist attacks in the past year, at Tree of Life Synagogue just a stone’s throw away from me in Pittsburgh and at Chabad of Poway in California.

You can say those were insane people not part of an organized movement if you like.

Then there’s what I’ve seen in the community of Catholic bloggers and writers. I’m friends with with Jewish women who are Catholic, such as Rebecca Bratten Weiss and Jenn Morson. I’ve seen what they go through when they speak publicly. It’s not that people disagree with them. It’s not even that people are horrible to them. People are horrible to any woman who speaks out on anything important; they do it to me all the time. It isn’t antisemitism to merely call a Jewish woman names. It’s only antisemitism if you do it because she’s Jewish. And when random commentators are calling my friend “vulgar Jew,” putting her name in “echos,” claim that a Jew can never actually be a Catholic– well, that is antisemitism.

Meanwhile I see public Catholics of a traditionalist bent getting more and more cozy with overt antisemites– Patrick Coffin giving a platform to E. Michael Jones, for example, or the gingerbread-averse Taylor Marshall and Steve Skojec following so many white nationalists on Twitter. That sort of thing.

Which brings us to Austin Ruse.

I don’t positively know that Austin Ruse is an antisemite. I am certain that he’s a curmudgeon and an annoyance. I know that he’s written some pretty nasty attacks on my Jewish Catholic friends, and he never seems to stick to attacking their ideas with which he disagrees; he makes it personal and implies they’re all part of a sinister conspiracy. Disagreement isn’t antisemitic, but if you happen to always imply conspiracy when you write about people who are Jewish, that’s not innocent. That’s participating in an antisemitic culture even if you don’t mean it that way, and I suspect he does mean it that way. But maybe he just hates everybody.

Recently, he wrote an attack on the Catholic author and theologian Dawn Eden Goldstein– who is a convert to Catholicism and is Jewish, if you couldn’t guess. He attacked her for being faithful to the Pope, of all things. The hit piece was so ridiculous I’m not going to justify it with a link, but you can read Goldstein’s level-headed rebuttal of him here. Again, he’s not writing to disagree with her ideas but as if to “expose” her, the way he so often does, as if this is all some kind of shady conspiracy.

And if Ruse wasn’t being openly antisemitic, the comments on the article certainly were. Here’s the most shocking one I saw:

In case anyone can’t read that, someone named Andrew Towne writes: “She’s a Jew (Goldstein) and she’s acting like a Jew– infiltrating, subverting, lying, causing trouble, trying to take over. When are Christians going to understand that a tiger doesn’t change its stripes? Jews have no place in the Church. They have no place among Christians. They can only be agents of destruction. Even when they “convert” they remain Jews. It’s in their DNA. Collectively, they are Anti-Christ. ”

It’s easy to laugh at a moron like this and wonder what he’s going to do when he finds out that Jesus, Mary and the original Twelve Apostles plus Saint Paul were all Jews. Christianity itself could be called a Jewish conspiracy. But this is the kind of talk that has, through history, gotten Jewish people tortured and killed. It’s actually not funny at all.

Rebecca Bratten Weiss wrote an article condemning this antisemitism. And I’d encourage you to scroll down and read her comment thread if you can stomach it. She doesn’t delete and block trolls like I do when I notice them; she just lets people talk to see what will happen. That thread is full of the most horrendous antisemitic garbage, more idiots claiming a Jew can never be a Christian, people linking to truly appalling blogs claiming that Christians are allowed to be racist in general. Thankfully I saw other people telling them where to get off as well. But if Rebecca was exaggerating her claims, those people wouldn’t have commented in the first place.

Here are a few low-lights, if you can’t stomach reading the whole thing yourself: 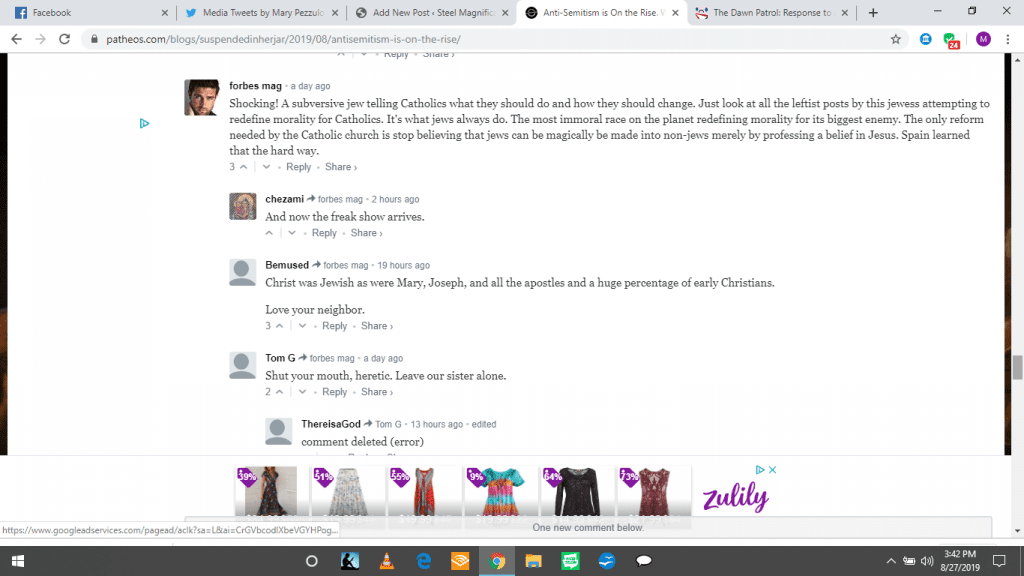 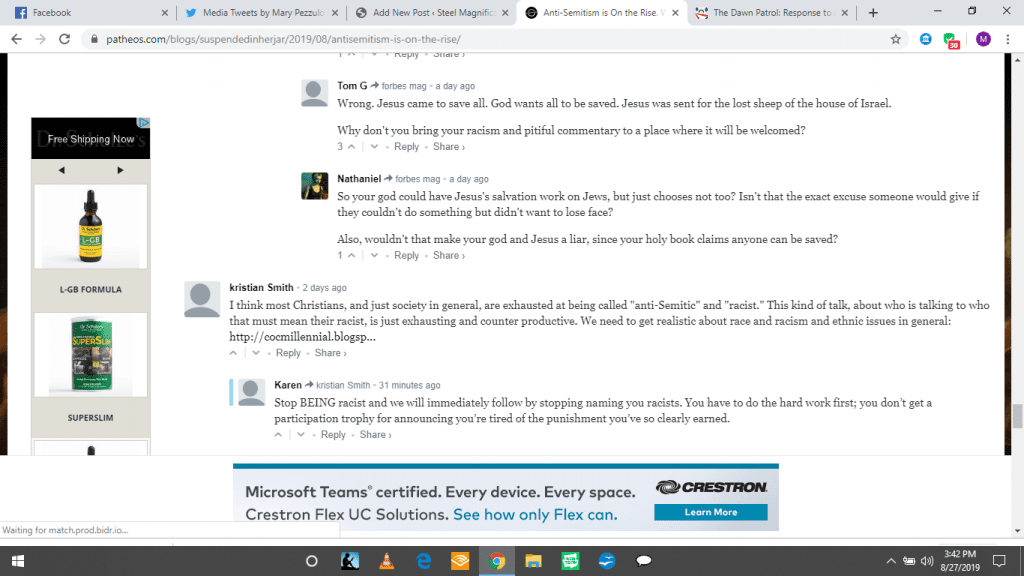 I’ve been struggling with finding something to say about any of this. Not because there’s nothing to say, there’s lots. But because I’m tongue-tied with shock and anger, and because there doesn’t seem to be anything I can add to the discussion except to say that this is really happening, they’re not just imagining it, I’ve seen it too.

But today I realized, that itself is something I’ve got to say. I’m remiss if I don’t. Because it’s always my job to speak out when others are being unjustly attacked– and also specifically because I’m not Jewish. When Jewish people point out antisemitism, they’re not believed. Maybe somebody will believe a relentlessly white Catholic descendant of honest-to-God rednecks from West Virginia and Indiana. And maybe they won’t, but I’ve got to try. Every one of us, whatever our background, has a duty to try.

For the record: this is really happening. They’re not just imagining it. I’ve seen it too.

Antisemitism is real, it’s deadly, and it’s on the rise. It’s finding a nice cozy home among “traditionalist” Catholics. And being in denial about this when you’ve actually seen otherwise, is another form of antisemitism.

We have to call it out when we see it, whether or not we feel we have something to say. 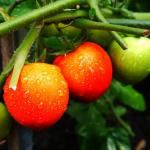 August 26, 2019
Everything that Lives is a Miracle
Next Post 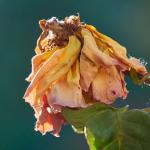 August 27, 2019 An Update on the Purported Apparitions in Argyle, Texas
Recent Comments
0 | Leave a Comment
"also, it makes all the difference in the world if you have middle class parents ..."
MoniLontra Why Don’t The Poor Cook From ..."
"I'm of two minds with this one. Yes, you need empathy, and finger-pointing when you ..."
Ignatz Why Don’t The Poor Cook From ..."
"If you have a cell phone, use it to record your neighbor when she's being ..."
Kyllein MacKellerann " To Reach for the Font
"Given the way she changes her demeanor and refrains from engaging in any incriminating and/or ..."
3vil5triker . To Reach for the Font
Browse Our Archives
get the latest from
Steel Magnificat
Sign up for our newsletter
POPULAR AT PATHEOS Catholic
1