Notes on the Verge of Impeachment

Notes on the Verge of Impeachment September 25, 2019 Mary Pezzulo

Last night I came home from running errands, to watch history being made. An impeachment inquiry has been opened for Donald Trump.

I have memories of the Clinton impeachment– we were homeschooling then, and we didn’t have the internet in our house, but my parents watched the evening news. They usually shooed me out of the room when they watched the news that year, because there was too much talk of sex. But I did get to hear bits of it on the car radio when we drove places. My mother and her Rosary group ladies gossiped about it over coffee. I felt that God was going to smite the country with a chastisement for the president’s unchastity, and prayed harder. I was surprised to find out that marital infidelity wasn’t illegal; only lying about it under oath. My father was at a loss as to what to tell his sons, when Slick Willie got away with it.

Things are different now. Judging by the person they’re rallying behind, conservatives have completely forgotten that unchastity is a sin. I don’t have a car with a radio to listen to, and I don’t watch the evening news; instead I’m saturated with news 24/7 on the internet. As far as I know, my daughter doesn’t lie awake at night worrying about chastisements. She and I watched Pelosi’s speech announcing the impeachment inquiry last night. Instead of curiously listening to the news, Rosie whined for me to turn it off and play with her. I wonder what I’ll tell my daughter, if this man receives no consequences for anything.

It’s not lost on me that the last straw before the opening of an impeachment investigation was not children dying in concentration camps, but trying to dig up dirt on Biden. Both parties are not the same, one is clearly more dangerous than the other, but neither impresses me with their values.

It’s not surprising that Giuliani seems to be the genius who pushed the idea of colluding with the country NEXT DOOR to Russia and hoping nobody noticed. Not surprising in light of recent years, I mean. If you’d told me about this time in September eighteen years ago that Rudy Giuliani would one day pull this stunt to help a President Trump, I wouldn’t have believed it. But Giuliani is Giuliani.

And I hate to be a wet blanket on what ought to be a happy occasion, but on the off- chance that Trump is really convicted, we’ll be stuck with Pence, who is at least as evil as Trump but more dangerous because he’s sane. And if he’s not, which he won’t be because the Senate wouldn’t convict even if Trump was filmed sawing live babies in half, a certain percentage of Republican voters will call that a victory and be energized for 2020. I hope I’m wrong about that, but that’s what I think is going to happen at this point.

When I was my daughter’s age, I knew theoretically that any kid could be president, but I knew that in practice the president would always be a stodgy white guy nobody liked. I knew that women could hold political office and some did, but it wasn’t very common and most of them were presented to me as evil feminists for doing so. When I was peeking at the evening news, that was what I saw.

Last night, when my daughter was whining at me to stop watching the evening news, she saw a female Speaker of the House in a blue dress announcing the opening of an impeachment inquiry into the most powerful man in the world, and an odious misogynist at that. That was worth seeing.

These are dreadful times, and we have to appreciate anything we can find that’s worth seeing.

I hope it all goes well.

September 23, 2019
Frank Pavone Talks Back, and I Have More Questions
Next Post 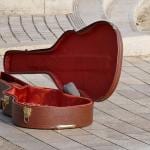 September 25, 2019 The Monthly Busk
Recent Comments
0 | Leave a Comment
Browse Our Archives
get the latest from
Steel Magnificat
Sign up for our newsletter
POPULAR AT PATHEOS Catholic
1