About That New Idol in the Colosseum…

About That New Idol in the Colosseum… November 11, 2019 Mary Pezzulo 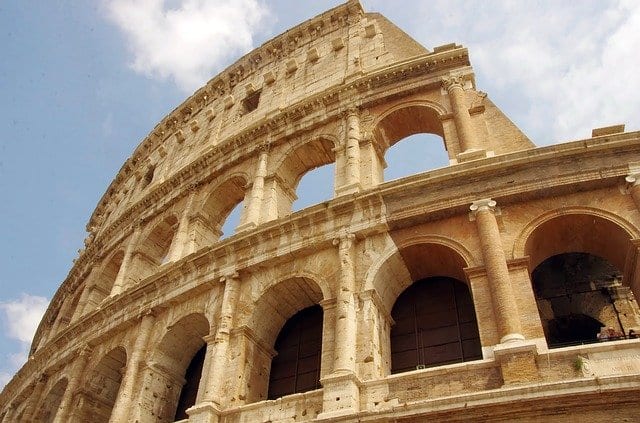 I regard reading LifeSite News the same way I regard changing diapers: I don’t like to do it and I avoid it when I can because it makes me feel unclean, but sometimes I have to because not doing so would have even worse results.

Today was one of those days when I had to break down and read a LifeSite News article.

I saw my friends sharing an article with a photo of a giant  fruity overblown statue from a horror movie on it and the title “Statue of Ancient God Put on Display in Rome Days Before Amazon Synod.” I just had to read that and get to the bottom of it.

The article concerns an extremely frumpy and historically inaccurate-looking statue, which LifeSite calls a “reconstruction of a pagan idol,” of the Mesopotamian god Moloch, which was placed outside the Colosseum nine days before the Vatican Synod. The whole article is slanted to suggest that the appearance of the Moloch statue and the fiasco with the small Amazonian icons that got thrown into the Tiber during the recent Amazon Synod are somehow related and part of a vast idolatrous conspiracy.

I’m going to go out on a limb and suggest they aren’t, for a very good reason. But to do this, I’ll be forced to give you a geography lesson.

The last time I talked about the location of Rome, I got people telling me I was full of it, and this topic is going to be a bit more complicated, so this time I’m going to employ some maps.

This is a map of Europe, upon which I have taken the liberty of circling the country of Italy: 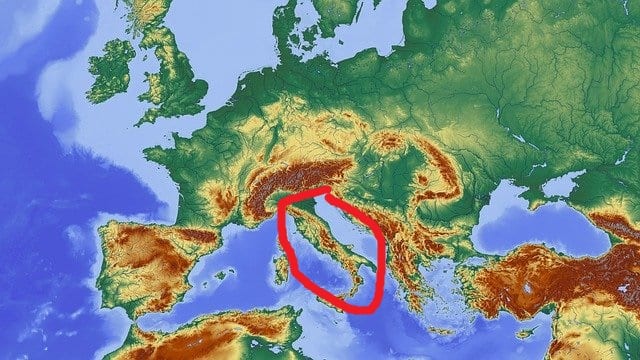 Italy is one of the easiest European countries to find on a map, because it’s the only one that’s shaped like a boot. Spain is a bowl, France is an overstuffed sandwich, England is a jaggedy island, but Italy is a high-heeled boot. That area of the world was known as “Italia” as far back as the time of Christ, when Caesar Augustus referred to its peoples as “Italians,” but the country of Italy was united in 1861. Before that, it was not a unified country but a collection of city-states, all of which were physically located in a region of the world called Italy.

Now, Italy is only one country with Rome in the middle. I’ll show you a closer-up map of Italy wherein I’ve circled Rome, for convenience’s sake: 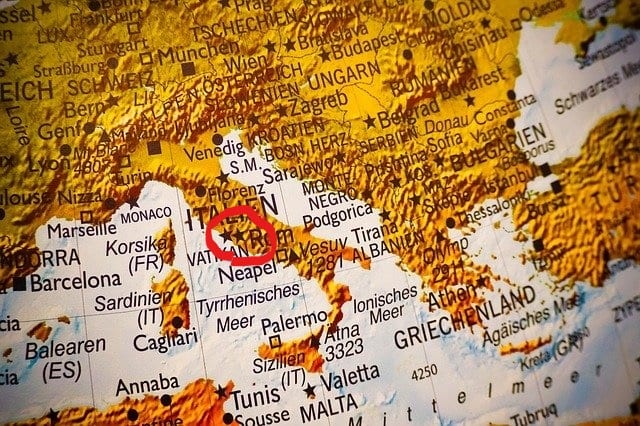 All of these maps are in the public domain courtesy of pixabay, for the record, and the cartographic circling is my own. Notice that there are two stars within that circle, one of which says “Rom” and one of which says “Vatikan.” This is where it gets complicated.

You see, one of the city states in the region known as Italy never became a part of the official country of Italy. It remains its own city state, independently run, not the property of Italy, despite the fact that it exists, physically, inside Rome which is the capital of Italy. Here’s a close-up map: 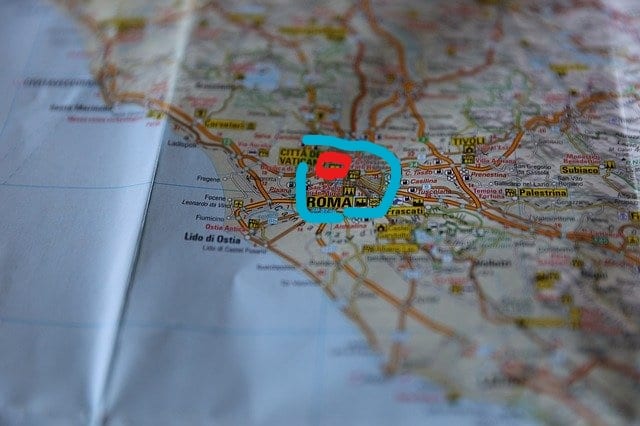 The blue circle represents Rome, the capital of the country of Italy, which is known as the Eternal City despite the fact that it’s only about 2800 years old give or take. The red circle was my clumsy attempt to isolate the Vatican City. The Vatican City is actually not a city but a country, the smallest country in the world. If you’re standing in the Vatican, you’re physically surrounded by Italy but you’re not standing in Italy, legally speaking. You’re standing in a whole other country. Think of the Vatican as the hole in the middle of a giant boot-shaped doughnut and you’ll have some idea.

Now, the Vatican City is under the sway of the Pope. He’s the official sovereign of the Vatican City. Things that go on in the Vatican are under the Pope’s control. Currently, the Pope is a guy from Argentina named Francis, though a lot of traditionalist Catholics disagree with me on that. Pope Francis runs the Vatican. Italy, of which Rome is the capital,  is run by President Sergio Mattarella at the moment. They change presidents quite a bit more often than we do.

The statuettes which may or may not have represented the South American goddess Pachamana or the Virgin Mary, which were all over the news a couple weeks ago, were brought to the Vatican City. The Pope not only let the statues in but approved of them and blessed them. None of this has anything to do with Rome.

The statue of Moloch is just outside the Colosseum. The Colosseum is in the city of Rome, the capital of Italy. It’s about 5.5 kilometers from the Vatican City, according to Google Maps. “Kilometers” is the fancy pants method of measurement they use in Italy; for Americans, that’s about 3.4 miles. You could walk it in an hour if you hurried, which none of us Americans is ever really willing to do on our Italian vacation, but fortunately there’s a bus every four minutes or so. The point is, the Moloch statue and the Pachamana statue which Lifesite is trying to suggest are part of a vast conspiracy are in two separate countries, procured by two separate governments for two separate purposes. The Vatican held the Amazon Synod of which the wooden statues that got thrown into the Tiber were a part. The City of Rome, which is a completely different municipal government in a completely different country than the Vatican, is hosting the Moloch statue.

And why is it hosting the Moloch statue? Is it an idol set up for worship by the tourists? Was it meant to have anything to do with the Amazon Synod scheduled to happen in a completely different country nine days later?

Not in the least. It’s just the first statue in a municipal art exhibit on the ancient city of Carthage. Carthagians were sometimes said to have worshiped Moloch and sacrificed children to him. If I recall correctly, that’s one of the reasons why ancient Rome burned ancient Carthage to the ground and sowed salt. The city of Carthage was the ignominious sworn enemy of ancient Rome and Rome wanted its memory erased from the earth, but apparently that’s water under the bridge now and the Romans are having an exhibit to help people remember Carthage. The eternal city indeed.

This particular statue isn’t even a replica of the kind of artwork you’d find in Carthage. It’s not, as LifeSite falsely reported, a reconstruction of a pagan idol. It’s a reconstruction of a movie prop, which LifeSite itself goes on to admit in the same article with no sense of irony. The statue is a replica of a statue of Moloch from a 1920s silent movie called Cabiria, which is partly based on a Flaubert novel called Salammbo. Flaubert described a fanciful, not very historically accurate statue of Moloch and that description was the inspiration for the statue in the movie which had very little to do with real life. The REAL Moloch, insofar as there was one, was a boxy-looking clay idol with a cow head, and that thing outside the Colosseum looks like an opera-singing frog with fish gills and 1920s art nouveau patterns on its body, so it’s kind of easy to tell them apart.

Now, should there be a 1920s movie prop outside the Colosseum, a sacred site to commemorate the murder of so many early Christians? I don’t know. It looks awfully tacky. I hope it’s not a permanent exhibit.

But it’s not as though there aren’t scads of pagan idols and replicas and reconstructions of pagan idols in Rome as it is. Yes, it’s true. Traditionalist Catholics like the people who run LifeSite tend to act as if Rome is a perpetually Catholic city founded by Pope Romulus the Extremely Fussy hundreds of years before the birth of that weird Jewish social justice warrior Jesus Christ. But actually, Rome used to be pagan. So pagan, in fact, that they tortured the early Christians to death for not burning incense to idols. And if you are offended by pagan idols on your European vacation, I think you’re better off going someplace you’d find less offensive to your traditional Catholic sensibilities.

I can get you a map of that as well. 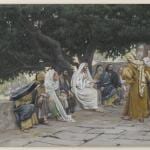 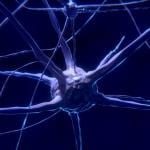