Dandelions are the Poor Man’s Marigolds 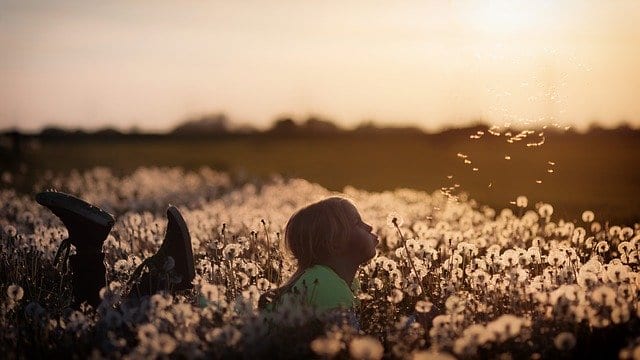 I went to the free pantry again, with half a bag of things. We go downtown once a week ever since the virus started and give them whatever we can scrounge–  a couple of cans when they go on sale, a box of milk when they have shelf-stable milk in stock. Sometimes we fill a whole bag, sometimes half a bag, sometimes two bags. The free pantry is what I have instead of a hobby or local friends, and filling it has become a bit of an obsession.

This time, Rosie was with me. Michael had to run an errand on the other side of town and I had to mail a package before the post office closed, so I took her down on the bus with me since she couldn’t be alone for hours. She hadn’t been out in a month except for a quick bike ride, to play in the yard, or to help in the garden. She had a grand time– stopping to draw stick figures in the mud of every puddle, stopping to blow the fluff off of every white dandelion.

After we mailed the package and admired the new dinosaur postage stamps, we went to the Friendship Room to feed the pantry. She sat on the steps at a safe social distance while I unloaded the bag.

The big Baroque Catholic Church is open in the afternoons, for anyone who wishes to pray. I always wash my hands at the Friendship Room’s outdoor sink, tiptoe into the church and pray, then tiptoe out and wash my hands again, after I make my pilgrimage to the free pantry. Now I instructed Rosie to do the same.

“I haven’t been in here since winter!” Rosie whispered as we sat in front of the Blessed Sacrament.

This isn’t the life I planned for her. Watching Mass every Sunday on livestream, watching Mommy cringe at the daily death counts, taking her beloved martial arts classes on Zoom, sitting across the yard from her friends or running races for fun on either side of the fence to make sure they stay far enough away… it wasn’t supposed to be like this.

It wasn’t supposed to be like it was before, either. I never planned to raise a child in Steubenville, in and out of poverty, riding buses, homeschooling “just for one more year” year after year after year because next year we’ll surely, finally be out of here and can put her in a nice safe school far away from this culture of bullying and rape.

I didn’t mean for her to know about so much darkness.

When we moved into the house we’re in now, we didn’t own furniture. We were moving from a furnished rental to an unfurnished one, and so grateful not to be homeless that we barely noticed the inconvenience. Rosie and I slept side by side on a twin mattress a neighbor had left out for Bulk Pickup, and Michael slept on another. It was the Friendship Room that brought Rosie her bed, my mattress, and the living room sofa. They also brought an artificial Christmas tree I still use every year. Sometimes Rosie goes up into the attic and brings down the Christmas tree, so she can decorate it and wrap her old toys to play pretend.

I didn’t mean for any of this. I didn’t want her to be an only child; I expected she’d have six devout Catholic siblings at least. I wanted to escape the Ohio Valley vortex and move to a nice prim suburb before she was old enough to have memories of this poisonous corner of the world, but here we are. I wanted her to belong to a certain parish where she felt at home, but we drift from Mass at one church and then another. I didn’t want her to know there was such a thing as hunger, drug abuse, domestic violence, but she’s seen all of these. The sometimes quaint, sometimes squalid patchwork streets of LaBelle are her notion of normal. She runs around the neighborhood with the Baker Street Irregulars and learns their stories— or she did, before all this started.

She comes to the Friendship Room and helps me feed the pantry.

She weeds the garden with me and brings me bouquets of yellow dandelions because I like them. Dandelions, I tell her far too often, are the poor man’s marigolds. Marigolds are one of the flowers named after the Virgin Mary– Mary the House of Gold– and they’re all well and good. But dandelions are far better flowers because they cost nothing, they’re nutritious to eat, they feed the bees, and the fluff is fun to blow away when they turn white. Their name comes from the Latin for “The Lion’s Tooth,” and I pretend it’s in honor of the Lion of Judah. If His blessed mother truly magnified the Lord, she must have been a lioness herself.

I planned a different life for Rosie, but I think I was wrong.

The latest trauma of the COVID-19 pandemic has only solidified the idea that I was wrong.

It wasn’t good that we suffered so much here, and if I could afford to move away tomorrow I’m certain that I would. I never want to see this cruel, dangerous corner of the world again. But wherever I end up going, I don’t want to live in a “nice” neighborhood. I don’t want to live somewhere safe and ordinary, a place of pristine lawns where they poison every dandelion. I don’t want to live where poverty is a dirty word and we imagine ourselves to be a different sort of human being than the kind who find themselves in danger. I want to live in a patchwork like LaBelle, where people need help and we can help them. If there’s not a Catholic Worker House with a free pantry anywhere near, I’ll build a free pantry of my own. I’ll grow a messy garden that would never do in a “good” neighborhood. I won’t mow my lawn until the weeds have had a chance to bloom and feed the bees.

Every Christian house ought to be that kind of house anyway– a house where life is cherished instead of poisoned, where people who have needs know that they can come and ask for help.

“Can we go now?” asked Rosie, fidgeting in her pew.

We got takeout on the way back; we found a sunny place to eat it outside, and threw the ice cubes from our drinks in a convenient mud puddle. We watched the sunshine and the clouds make shadows on the striped cliffs of West Virginia across the chaotic Ohio. We admired the displays in the windows of all the shops and daydreamed about when they’d be open again. And then we went back home, stopping to blow the fluff off of every white dandelion, back up through the woods to LaBelle, to shelter in place.

This isn’t the life I meant for her, but it’s the one that made her who she is.

I guess it must be a good one.

April 22, 2020
Frank Pavone Throws Down The Gauntlet, And I Respond
Next Post 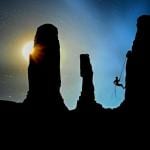 May 1, 2020 Faith Is A Thing That Holds
Recent Comments
0 | Leave a Comment
Browse Our Archives
get the latest from
Steel Magnificat
Sign up for our newsletter
POPULAR AT PATHEOS Catholic
1