For God So Loved the Formless Waste

For God So Loved the Formless Waste December 4, 2020 Mary Pezzulo 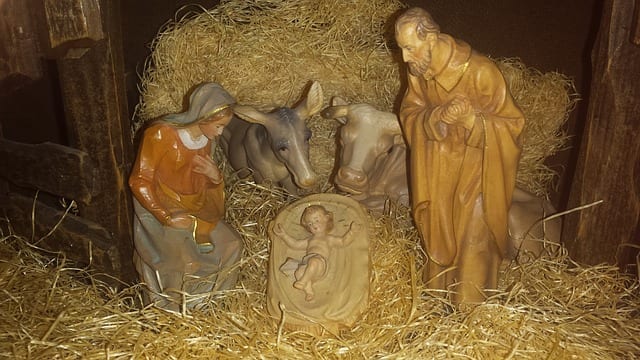 Rosie and I went downtown, to bring a space heater to the Friendship Room, and to see the nutcrackers.

Steubenville has a whimsical Nutcracker Village downtown in Fort Steuben Park every year. Local businesses sponsor six-foot nutcracker sculptures in different designs, which are lined up in the park amid Christmas lights and speakers blaring music. There are little sheds called “chalets” where local craftsmen set up shop like a Christkindlmarkt, which is why it was allowed to be open this year during the pandemic– it counts as a farmer’s market, and was observing social distancing according to farmer’s market regulations. I planned our trip to the Friendship Room to be early in the afternoon just before schools let out. That way, we’d be able to see the nutcrackers before there was any danger of a crowd, after we dropped off the heater to help our neighbors.

This was the first time Rosie had seen the Friendship Room outfitted for a pandemic in winter: plexiglass bolted to the porch so that the homeless could shelter out of the wind, since they can’t crowd indoors. The Santa Claus figurine on the porch had his own mask on, which she thought was delightful.

I wasn’t delighted. All I could think of was the people who usually take shelter indoors at the Friendship Room: not only the homeless but the housed poor who can’t afford to keep the gas on, or whose slumlords won’t fix the furnace, or who live in houses heated by fuel oil and can’t afford to fill the tank. They nail blankets to their windows and sleep in their coats in the winter, and when it gets too cold to do that they come and warm up at the Friendship Room. This year, they can’t.

I prayed my space heater would help one of them.

“We can go see the nutcrackers now,” I said.

We walked past the Sycamore Center, where Rosie used to go to the Bible Club. They’d sing hymns and memorize scripture verses while coloring. Rosie quickly learned to recite “For God so loved the world that He gave His only Son so that everyone who believes in Him may not perish, but may have everlasting life” without missing a beat, but then get mixed up on the citation and say that it was “Genesis one one.” I told her it was a mistake, but meaningful. In the beginning, God created the Heavens and the Earth. The earth was a formless waste. Darkness was over the surface of the deep, and the Spirit of God hovered over the waters. God loved this formless waste into light and order and life. God loved Adam out of the clay in His own image and likeness so that we could love the new earth and love God through our stewardship of it, but we ruined it. Then He loved the ruined earth still more, and sent His only Son so that death doesn’t have to be permanent for anyone who doesn’t want to die.

“We’re so close to your being able to go back to lessons,” I promised, lying a little. The first vaccines are scheduled to get to Ohio a little before Christmas, but they’re going to the medical professionals.  We won’t get ours for months.

This year, the nutcrackers are lined up at larger intervals, and the display stretches all the way down Fourth Street. School children had colored pictures to paste in the windows of derelict buildings. It looked downright cheerful. I kept forgetting that I was stranded in Northern Appalachia, in a county that’s third in the nation for positive COVID tests, in a state whose COVID numbers are skyrocketing out of control. And then I’d look down at Rosie, scampering along in her black face mask.

It’s Christmas, and I am raising a child in an apocalypse.

It wasn’t supposed to be this way. We could have all pulled together and done something drastic for the first several weeks of this hell on earth, and then we could have had something like a normal year. We could have lost about sixty thousand people, no small tragedy in the first place. But there were so many selfish people doing so many foolish things. We’ve lost well over a quarter of a million and the number is snowballing. Countless people are permanently disabled by the virus. Countless lives are ruined. I am trapped in the middle of it, raising a child, we are always in danger no matter how careful we are, and she hasn’t seen her friends  since March. This is promised to be the darkest winter of our lives. And it’s Christmas.

We milled around Fort Steuben Park and admired the display. I always think it’s silly fun that the Jewish community paid for a Fiddler on the Roof nutcracker for the Christmas display. I love the David Bowie nutcracker, the Mouse King, and the Magritte-themed creation with the green apple face. I’m nervous about the John Calvin nutcracker and the one representing Saint Paul with a sword. I’m fascinated by the nutcracker who moves his mouth in bad timing to a recorded song if you put a dollar in his drum.

There was nobody but the clerk in the gift shop, so we went in and bought two tickets to take a self-guided tour of Historic Fort Steuben– another relatively safe activity we could do outdoors without touching anything. Rosie went up to the observation tower and pretended to guard the fort from enemies. She ran around the grassy expanse, looking at the stocks and the blacksmith’s shop and the quartermaster’s building with a whole dead deer hanging from the ceiling. She saw the campsite with the Indigenous American mannequins in it, and listened patiently to my boring lecture about how tragic it was that Europeans came as conquerors and destroyed so many people who were on the land first.

Those people were victims of a pandemic too, one we caused, and then we committed genocide as if the pandemic weren’t enough.

We peeked into the fort’s authentic hospital building, with authentic 200-year-old surgical tools on display. There was a mannequin doctor in an apron poised over a wounded mannequin on the table, bleeding red paint from a plastic leg.

“No anesthesia in hospitals those days, and they didn’t know about germs,” I found myself lecturing, and then shuddering again at the thought of hospitals. There have been so many terrifying images of  hospitals all over the news, lately.

I don’t think I’ve ever had a lower opinion of the human race than I did just then.

Outside the fort, we admired the rest of the displays.

There’s a spot near the gift shop where they’ve set up three nutcracker Wise Men near a creche of non-nutcracker figures. There are Mary and Joseph, homeless and in a strange town, kneeling over the manger. There are the ox and the ass, the big heap of straw, the angel hovering over them. Jesus is there with His arms outstretched in blessing, making His dwelling among us, drawing every human tragedy into the eternal Life of the Holy Trinity.

Every beautiful thing that a human has ever made, every harmless and silly celebration that humans have ever enjoyed, every work, every thought, every mundane and ordinary day, every disappointment, fear, shock, trauma; every tragedy we’ve had to endure, every unjust horror that has ever been inflicted by humans on humans– all of these the Child gathers to Himself, and draws up into the life of the Holy Trinity. He would have come to dwell with us regardless. That was His plan from the beginning. Since we made such a nightmare out of this world, He chose to dwell with us in the nightmare, and let the nightmare kill Him, and rise from the dead anyway, and bring along any of us who didn’t want to stay dead as He did. For God so loved the world that He gave His only Son so that everyone who believes in Him may not perish, but have everlasting life. And the Grace of the Lord Jesus Christ is with us always, Amen.

“I’m hungry,” said Rosie, so we started on the way home.

I am raising a child in an apocalypse, and it’s Christmas. The earth is a formless waste, and there is darkness over the surface of the water, and I am drowning, and I don’t know how much worse things are going to get.

But the Spirit of the Lord hovers over the water. The Lord descends to be with us in the water, sanctifying it. He ascends from the water and brings us along with Him. And the grace of the Lord remains with us.

That has to be enough, for now.

December 7, 2020 Lisa Montgomery's Upcoming Execution is an Atrocity
Recent Comments
0 | Leave a Comment
Browse Our Archives
get the latest from
Steel Magnificat
Sign up for our newsletter
POPULAR AT PATHEOS Catholic
1