In the First Snow 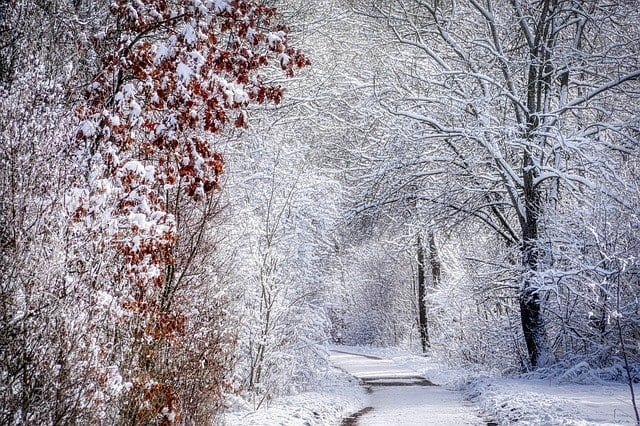 I kept calling it the First Snow and Rose kept reminding me that it wasn’t, because it had snowed in February and we’d gotten flurries in November. But it was the first real heavy snow of this winter.

Last year we hardly got any snow at all, but this year seems to be making up for it. I woke up to a pristine blanket of white on every surface outside.

I had to run an errand downtown and I didn’t want to take that bus anymore than I could help. COVID cases are skyrocketing in Jefferson County. We’re in the top twenty counties in Ohio for spread, and I just found out we’re third in the country for the speed of cases rising. We don’t lead the nation in much, but we’re good at spreading germs, apparently. I was terrified to take the bus.

I decided to walk, at least one way.

I walked down those concrete stairs that scale the cliff, from the rich part of LaBelle to the entrance to the highway downtown near the Orthodox church. I had never done that in fresh snow before. At first I wanted to turn back, but I found it was easy because the stairs aren’t swept regularly. They were covered with twigs and debris, which meant they weren’t slippery.

It’s always shady on those steps. Tree branches criscross overhead like a trellis and wild grape vines arch over everything. But in snow, it’s even more remarkable. Every branch has a thick white meringue of snow covering it from one end to another, and there aren’t leaves to block the sun, so light filters through. It’s a tunnel of pale light, a sloping cylinder of different shades of white, like walking through a kaleidoscope. Perhaps you didn’t know there are different shades of white, but there are. There’s a whole rainbow of tints on white snow.

And it’s so quiet.

Nothing makes Steubenville shut its mouth.

There are always people milling around outside my window, yelling. The state-wide COVID curfew has changed nothing. People make noise for 24 hours. There’s one particular inebriated man who likes to stroll by at about three in the morning, complaining to himself. There’s my neighbor who keeps a constant slew of obscenities running like the motor of a car whenever she comes outside. There are the Baker Street Irregulars on the corner, who do nothing but play and squabble and shriek. There are tired parents who have one mode of communication and that’s hollering.  There are home fireworks displays from June until September. There are people who like to drive around in cars at random hours of the day or night, blasting hip-hop music. There are townies driving junk cars without mufflers. Every once in awhile there happens to be an awkward pause where there aren’t any noisy cars or people, and in that pause you can hear the cars driving on University Boulevard and the trains wailing through downtown.

But snow mutes everything. The kaleidoscope path down the steps was quiet.

It was so quiet that I could hear the water rushing at the bottom of a storm drain at the place where the steps reach a landing and turn to the side.

It was so quiet I could hear the drip-drip-drip of water where the sun melted just a little snow and it made its way trickling through the tree lattice.

It was so quiet, I could pray.

I felt like I hadn’t prayed in so long. I’ve been trying to pray every day. I pray in the morning and evening, and pray along with the Sunday Mass on livestream. But the prayer of silence, the prayer of nature, the deep exhale of “thank you” when I see something genuinely beautiful: I haven’t done that in weeks.

It even smelled good, and that’s something that Steubenville doesn’t do. It didn’t smell like homelessness or smoke or pollution; it just smelled like snow.

For a moment, there was no pandemic.

For a moment, there was no lockdown, no curfew, no fear of the virus itself nor of what people would do in the name of the virus. There was no quiet desparation after being months without the Eucharist and much longer without confession. There was no sadness that I hadn’t gotten to go swimming or go to a mall this year. There was only the quiet, the smell of snow, and the walk down the kaleidoscope for ever and ever and ever.

Then I came out of the woods, down the last flight of stairs, and popped back into the real world near the white clapboard Orthodox church.

Cars were squeaking on the breaks to keep from colliding on that steep hill down Washington Street. The sky was gray. The air was smelly. I was in Steubenville again.

But for a moment, I hadn’t been.

I had been walking down a kalidescope.

I had been in the First Snow.

December 4, 2020 For God So Loved the Formless Waste
Recent Comments
0 | Leave a Comment
Browse Our Archives
get the latest from
Steel Magnificat
Sign up for our newsletter
POPULAR AT PATHEOS Catholic
1