Deer in the Basement: Emmanuel and the Mystery of Spiritual Abuse

Deer in the Basement: Emmanuel and the Mystery of Spiritual Abuse April 19, 2021 Mary Pezzulo 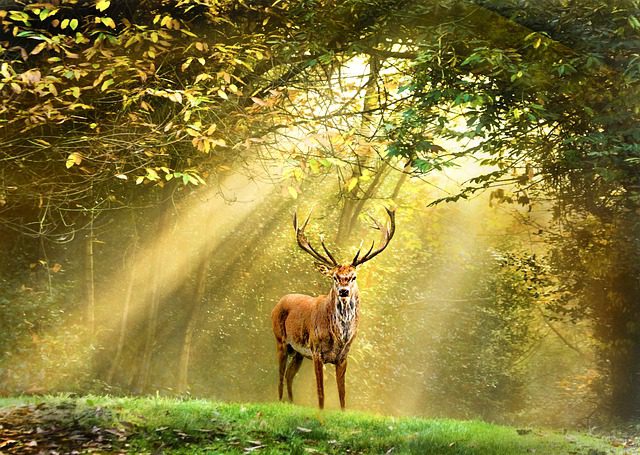 I dreamed that God was being kept prisoner in the basement.

I don’t think that this was some kind of mystical vision, for the record; I think that it was just my brain making plain to me something that ought to have been obvious in my surroundings. And because I’ve been steeped in Roman Catholic imagery from birth, the way my brain made it look was something out of Roman Catholic tradition. I woke up and I understood something I hadn’t before.

Do you remember the legend of Saint Eustace, who was hunting a great big stag in the woods one day and saw the image of a cross between its horns?  That’s the animal I dreamed about. I dreamed I was in the foyer of a Catholic church that was also a petting zoo– a juxtaposition that made perfect sense at the time. The foyer looked just like the foyer of a church, so I wondered where the animals were– and then I saw one, far away down a corridor out the corner of my eye. It looked like a gigantic deer with wide-spread antlers, much larger and more majestic than the White Tailed deer I saw in Ohio and West Virginia.

I followed down the corridor and the deer kept walking, slowly, just at the edge of my vision. Every time I came to a corner or a place where the hallway branched I would glimpse the deer again and keep walking. Eventually it occurred to me that I wasn’t in a church anymore at all, but in the dank, smelly basement of something that looked like a school or other institution. There were doorways that led to classrooms and a cafeteria. Eventually, I rounded one last bend and found myself facing a door with bars on it, like a jail cell.

Inside the door, it wasn’t a jail cell. It was a bathroom with three stalls that didn’t have toilets but drain holes. There was a sink in one corner that didn’t look as if it had ever been turned on. There were lurid brown stains and puddles on the putty-colored tile and one ugly fluorescent light overhead.

The deer I had followed was staring straight at me now. He no longer looked large and majestic, but tiny. He was standing on two legs and wearing a prison uniform, but his head still looked like the head of a deer. And there were tears in his eyes.

I woke up and had the uncanny feeling that I had been looking at Christ.

I dreamed the same theme another time, even more upsetting. I was in the basement of a church again, but this time it looked like a church. There were statues and little side chapels here and there, a sanctuary with an altar. Toward the back of the church was a stack of glass aquariums full of cloudy, disgusting water. I didn’t want to believe there were live fish in that water, but as I gazed I saw them, far too many fish for the space, swimming about in the muck. Next to the aquariums was a large packing crate which I opened– it was also full of murky water. But instead of a fish, there was a tiny pink river dolphin inside.

I woke up remembering that a dolphin is sometimes used in Medieval art to symbolize the Holy Spirit.

The other day,  on the horrific stories of Father David Morrier and Franciscan University, one of my Disqus commentators had a very interesting remark. She said “In an ironic sort of way, another victim in all of this is God. His institutional Church has been using Him, exploiting Him, to serve their own ego needs.”

That was so beautifully put, that it set me thinking of those two dreams again.

The Church using and exploiting God.

Clergy and other authority figures taking people’s genuine experiences of a loving Being and using them to control and abuse.

A majestic deer locked in a prison cell and a dolphin swimming in a packing crate.

This is part of the horror I’m digesting right now, and part of the mystery of being a person who still believes in God after a spiritually abusive childhood. I wasn’t sexually abused, but I was spiritually abused in the name of the Charismatic Renewal and the Catholic church. And now I know so many people who were abused, far worse than I ever was. Some of them still believe in God and some don’t.

Fathers Tiesi, Scanlan and Morrier promised healing through their prayers. I went to Scanlan and Morrier both for prayer, and I experienced genuine grace from it. Prayer was how Scanlan managed to look like a good person. Prayer was how Teisi groomed his victims. Prayer was how the narcissistic Dominican sister I’m still afraid of, the one I refer to as “Sister Angeline” but will someday call by her name, duped my family and got us sucked through the looking glass into the toxic and abusive world of the Charismatic Renewal. God remains present in prayer, even when the prayer is being used in such a blasphemous way. The promise of a greater outpouring of the Holy Spirit– or worse, the threat of being cut off from the Holy Spirit– is the carrot predators use in the Charismatic Renewal. In another setting, a more traditionalist aesthetic, they use a different Person of the Holy Trinity. They try to deny you access to Christ– I once heard of a victim who was told they couldn’t receive Holy Communion at daily Mass unless they went to confession every week, and the only confessor available at the boarding school was abusive.

Christ and the Holy Spirit still exist– in the Church, in the sacraments, in every place where two or three are gathered in the Name. God is still real. The Holy Trinity remains Love eternally outpouring into Love. God remains everywhere present and filling all things, accessible to us in every single human experience– somehow, as it were, especially concentrated and working in unique ways in those mysteries we call the sacraments. God is so great that He saturates the universe whether we welcome Him or not– including when we think we’re welcoming Him and we’re not. God is also perfectly meek and humble. He insists on coming in, and then He remains there, silent like a lamb before the shearers, whether we honor Him, murder Him or hold Him for ransom.

God dwells everywhere. What you do with that is up to you. You are free to commit that horrendous blasphemy of locking Him up in a cage or a box instead of letting Him move you the way you ought to go. You can take it one nightmare step further and hold the God you’ve just caged for ransom, demanding that other people endure suffering and abuse to get near Him. You can abuse somebody else until they can’t even see that God dwells in them as well. Yet He remains.

Sometimes I wish God was different. I don’t want Him to be a dolphin in a crate; I want him to be an angry badger or a shark that will bite any hand who tries to lock Him up. But He remains who He always has been.

In the middle of this nightmare is Emmanuel, God-with-us, God suffering in us, God refusing to abandon those who are abused and exploited and hurt.

At the end of all this will return Emmanuel, and all of us will see Him together, and He will not look like our abusers. He will look like us.

Whatsoever they do to us, they are doing to Emmanuel.

That’s not enough, but it’s something.