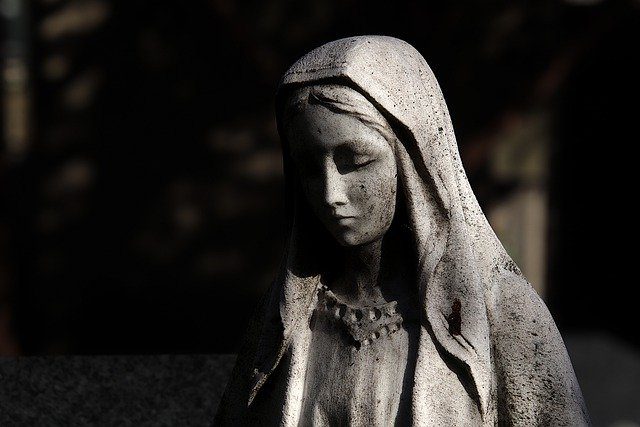 I must admit I had about two weeks feeling exceptionally shaky since the Father Morrier indictment last month.

I am very far from the epicenter of most of the abuse that went on at that school– I was only spiritually and emotionally abused by the Charismatic Renewal and Franciscan University. I didn’t suffer half of what many have suffered. Still, being stuck out here, so close to where so many dreadful things happened, estranged from most of my family because of the madness of the Charismatic Renewal, one mile from that campus, is extremely awkward. The parishes around here are awkward– nearly everyone thinks the University is doing the Lord’s work and despises the people the University despise. There is no neutral territory here. There’s no Catholic circle where you can just worship God. You have to be part of the clique.

Most of my friends are online instead of in person, and quite a few of them are graduates or dropouts of Franciscan University. We always talk when scandals like this come out in the news. We compare notes.

“What did they think would happen?” one of my friends remarked. “Did they think we’d all just disappear? That we wouldn’t talk to each other?”

That’s apparently exactly what they thought. It’s what they needed. It’s why they fought so hard to suppress and gaslight students who were raped and why Father Scanlan fought so hard to hide Father Tiesi’s sexual abuse. It’s why everyone who likes the university immediately jumps on survivors and calls them liars when they speak out, and blame this all on George Soros or a “spiritual attack”– because they live or die by their reputation.  They’re supposed to be the safe, cheery, devout, chaste little Charismatic Catholic university that stands up for the sanctity of all life. Their reputation is what they’ve depended on, and it’s falling apart now– slowly, but in steady chunks.

Every time a chunk falls off, it feels like it’s falling on me.

A few of my old friends from the Faith Household I used to belong to, the one that turned spiritually abusive and threw me out, contacted me this week.  They didn’t do anything wrong. I love them and I wish we’d stayed friends, but it’s so awkward. I’m still thinking how to respond. One of them affectionately called me “sister” and I found myself responding “I’m nobody’s sister and nobody’s child.” And it’s true. Or, at least, it’s true that that’s how I feel.

I lost my family to the Charismatic Renewal. And, emerging from all the spiritual abuse, I feel like I’ve lost my faith. I still believe in Christ. I still experience Him in the Eucharist, so I refuse to break communion with the Catholic Faith. But there’s no affection there. The Church hurts.

I must admit it’s been a little difficult putting my head back together to write this month. My blog output and my tip jar have suffered because of it– this week we’re running on fumes, living hour to hour instead of day to day. But I had a little money last week, so I broke off a bit to share and brought the Friendship Room a bottle of milk. And after I dropped off the milk, I went into the big Baroque Catholic church across the street where they say the Latin Masses.

This magnificent building was the church I got married in. My Household Sisters were bridesmaids; eighty per cent of the people at the wedding were Franciscan University students we thought were our friends. Monsignor, who passed away several years ago, married us.  Father Morrier himself gave the homily. That was a lifetime ago. You couldn’t pay me to go to Mass here now; I go to less ostentatious-looking Catholic churches with fewer memories. But I like to sneak in when it’s quiet so I can pray alone.

I pumped a little sanitizer onto my hands from the great big bottle in the foyer. Vidi aquam egredientem de templo, a latere dextro, alleluia. I saw water coming from the right side of the temple, and all to whom this water came were saved.

There hasn’t been Holy Water in the font for over a year now.

I slid into a pew behind one of the columns that hold up the vaulted ceiling– at just the right angle so I could talk to the tabernacle without looking at the statue of Mary in the shrine next to it. I am often scared of Mary. I was baptized with her name and that of her holy barren cousin, Mary Elizabeth. I was raised in Apparition Culture and learned to dread her. Then I came to Steubenville and fell fervently in love with the Rosary; I joined a Faith Household called “Totus Tuus Maria.” They promised they were my new family who would love me forever and replace the family I was estranged from. And then they got tired of me and threw me out. And then there was the rape and losing everything.  And I don’t feel close to her anymore. I am afraid she’s angry with me. I feel like she doesn’t want me hanging around her Son.

This is the real blasphemy of spiritual abuse: abusers hurt people while wearing the mask of faith. And victims believe that it’s God who has rejected them.

I turned to the tabernacle, to the God Who screamed to God, “Why have you abandoned Me?” and received no answer, and descended into hell.

He must have known how hard it would be for so many of us to think of ourselves as brothers, sisters, children. He must have realized we wouldn’t often feel that way.

Maybe that’s why the Gospel has so many parables about masters and servants. And not kind masters either, but the opposite: exacting masters who go away on long journeys, leaving the servants to work things out alone. Masters who abandon the servants in the hands of stewards who feast and drink and enjoy themselves rather than feeding the household– and then, of course, the stewards start to abuse. They beat and rape and torture their fellow servants, claiming to be carrying out their master’s wishes, and nobody speaks up for them. The master does not seem to return.

He must have known that He would appear like that to us, so many times. He warned us ahead of time to remain faithful because He knew it would feel impossible.

After I prayed, I wandered into the back of the church. There’s an old-fashioned baptistry back there, with a deep font that’s carefully covered in a metal dome. Next to it is a life-sized crucifix uncomfortably at eye level, so close I could touch it. The baptistry was, as usual, closed off by an ornate metal gate, as if Jesus were caged in there with the font.

I stared at Him, His downcast eyes, His wounded side.

Vidi aquam egredientem de templo, a latere dextro, alleluia. I saw water coming from the right side of the temple, and all to whom this water came were saved.

He grew up before him like a tender shoot, and like a root out of dry ground. He had no beauty or majesty to attract us to him,  nothing in his appearance that we should desire him.  He was despised and rejected by mankind, a man of suffering, and familiar with pain. Like one from whom people hide their faces he was despised, and we held him in low esteem.

He rose in glory and ascended to the Father, but He also remains here, in the Church, suffering with all of her victims, caged up next to the font. Beloved Son in Whom the Father is well pleased but for our sake, in the eyes of the world, neglected, tortured, nobody’s brother and nobody’s child. He will come again in glory, at an hour we know not, on the Day of Wrath when everything will be put right. But He is also truly present here where everything is wrong.

I went outside, blinking in the warm, sultry glare of a Steubenville April afternoon.

April 29, 2021 It Was Holy Thursday, But Also Easter
Recent Comments
0 | Leave a Comment
Browse Our Archives
get the latest from
Steel Magnificat
Sign up for our newsletter
POPULAR AT PATHEOS Catholic
1