We get the day off of work. Our kids are home from school. We march. We remember Martin Luther King Jr. We remember that we had to have our eyes opened to see the injustice that was right in front of us. We remember that the world our God wants to create is a world of justice.

We remember that we’re not there yet.

What Does It Look Like When God Shows Up?

I’m not sure how many of us cultivate an imagine for what it might look like if God were to show up and act. But on the flip side, we’re quick to point out what it looks like when God’s not acting to our liking.

Hold that up to a mirror and we get a picture something like what Jesus preaches in Luke 4:

Jesus goes on to claim that he is this embodiment of justice. He is this picture of God showing up.

What Does It Look Like When We Show Up?

If I had any modicum of artistic ability at all, I would draw a two-frame cartoon or split-frame cartoon that went something like this:

Frame one: person musing to a friend what an awesome place the world would be if God showed up today in the ways that the prophets (including Jesus) promised that God would.

Frame two: God musing to an angel what an awesome place the world would be if people showed up today in the ways that the prophets (including Jesus) told us to.

Jesus’ sermonette in Luke 4 comes from Isaiah 61. A few chapters earlier God had called on Israel to act like this:

This is the fast I choose:
Release the bonds of wickedness–set free the mistreated!
Share your bread with those who are hungry,
Bring the homeless into your house,
Clothe the naked when you see them.

Maybe what it looks like when God shows up is that God’s people are showing up.

If you keep reading in Isaiah, after God tells the people to hold a different kind of fast, a fast for justice, you find that there’s more to the story. The very people who are failing in their duty to be agents of justice still long for it for themselves.

Because of all this, justice is far from us, and righteousness beyond our reach. We expect light, and there is darkness. We moan like doves. We expect justice, but here is none; we away salvation, but it is far from us. (Isaiah 59:9, 10, 11, CEB)

This is the complaint of a people who, when looking “down,” are quick to mete out whatever is to its own benefit. But when they look “up” or “sideways” in the social structure of their world demand that things be just.

And I wonder as I read, I wonder as all of these musings come flowing together on Martin Luther King Jr. Day, whether they should not be mirror for us.

How many of us complain about the injustice of big money in politics, as we live blithely unconcerned about how our own big consumer money leaves a footprint of slavery around the world?

How many of us complain about seemingly asinine court decisions that make it to the news while living in blissful disregard of the massive rates of incarceration that plague the African American communities of our own country?

A Worthy Fast for Today

So what does a fast for MLKJ Day look like that might be pleasing to the Lord? (If I may be permitted to so riff on Isaiah 58.)

Watch his “I Have a Dream” speech.

Watch Michelle Higgins’ prophetic call to the church to better live into its calling.

Go to a march, a remembrance, a rally, listen to a podcast that covers Luke 4. But perhaps the most important thing we can is to engage.

Higgins confronted us with this powerful challenge:

Indifference is not hate, but it is not love. And therefore it is the enemy.

Martin Luther King Jr.’s letter warns of the sin of apathy, of the injustice that lingers while the powerful ask for patience.

Christians make a radical claim about our identity: we are the body of Christ. Too often we engage this metaphor only to ask, What can I do as part of this group? But there’s a much more profound implication.

When we gather, there is the gathering that is none other than Christ himself. The body of the crucified and resurrected Christ is the two or more gathered in his name.

So that holy longing for God to show up and do something about the injustice in the world, it has a possibility for realization that we, at least in part, hold in our own hands.

We are to show up–the people of God who are the presence of God. We are to act–the instruments of God empowered by the Spirit of God. If the God of history is to bend world’s great story toward justice, it might just require us to roll up our sleeves. 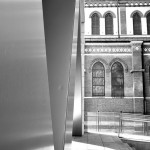