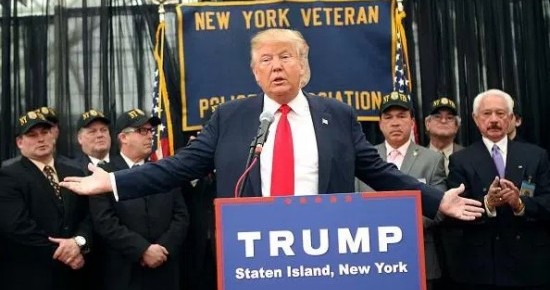 Jesus, like most Jews of his day, found a summary of the Law in the two great commandments: Love the Lord your God and love your neighbor as yourself. The devil, as they say, is in the details.

Not only was the circle of moral responsibility widened. The very act of neighboring was dislocated from the pure, holy, and right. It was put into the realm of the shunned Samaritans.

But it gets worse, this business of love. Because Jesus isn’t just interested in neighbors. He’s also interested in the person on the other side of the firing line.

“You have heard that it was said, ‘Love your neighbor’ and ‘hate your enemy.’ But I say to you, love your enemy and pray for those who persecute you.”

I have always been leery of this verse. Not in the sense of thinking it’s wrong, but in being cautious in the extreme about calling anyone my enemy.

But as I watch Donald Trump enthrone Mr. Breitbart at the right hand of power, as I watch the decay of truth in favor of emotional impact, as  I watch persons within the jurisdiction of the U.S., here lawfully, deprived of equal protection of our laws, as I watch the unfettering of the banks that brought the globe to the brink of financial ruin eight years ago—though in none of these things have I been personally attacked, I have never felt so much like the world was being run by the enemy.

Which raises the question for me: what does it look like to love Donald Trump?

All of our presidents have had weaknesses. But never in my lifetime have I seen one who is so utterly fragile. Make no mistake: the wrath of someone who cannot take any criticism is not strength. It is weakness. Arrogance is cover that insecurity dons to protect itself.

The hallmarks of Narcissistic Personality Disorder (NPD) are grandiosity, a lack of empathy for other people, and a need for admiration. People with this condition are frequently described as arrogant, self-centered, manipulative, and demanding. They may also concentrate on grandiose fantasies (e.g. their own success, beauty, brilliance) and may be convinced that they deserve special treatment…

People with narcissistic personality disorder believe they are superior or special, and often try to associate with other people they believe are unique or gifted in some way. This association enhances their self-esteem, which is typically quite fragile underneath the surface. Individuals with NPD seek excessive admiration and attention in order to know that others think highly of them. Individuals with narcissistic personality disorder have difficulty tolerating criticism or defeat, and may be left feeling humiliated or empty when they experience an “injury” in the form of criticism or rejection. (Psychology Today)

What I see when I look at Trump is someone who has never known love. Or, probably more specifically: Trump shows signs of only knowing transactional love. He knows the feeling of love that comes with the praise of success. He does not know any possibility of loveliness in the messy failure that is real life: not for others, not for himself.

For me, loving my enemy begins with seeing the unloved, wounded child.

When I was a freshman in college, taking my first religion course, when I had one of those moments when I thought I understood. Now I see that I was wrong.

Ralph Wood was telling us a story. I think it was about Dietrich Bonhoeffer but knowing him Karl Barth was the more likely culprit. At any rate, the question put to the theologian was this: “If you could say one thing to Adolf Hitler, what would it be?” The answer: “While we were yet sinners, Christ died for us” (Romans 5:8).

At the time I thought I got it: It’s not too late for you! Be saved!

But now I wonder if there was something else going on there. Something more pastorally insightful.

The verse he quoted begins, “God demonstrates his love toward us in that…”

So that when God looks at the debit sheet, the failure, the sin, God nonetheless sees a beloved child.

People with untended wounds are notorious destroyers of other people’s lives. We are seeing a good bit of that oozing from the Oval Office these days.

This puts us in a peculiar situation. What does loving your enemy look like when you are part of a Democratic (well, technically Republican) system of government and a wounded lion is at the helm?

Like a family member that you can’t just get rid of, it seems to me that somehow the balance must be struck between cultivating that sense of compassion, finding opportunities to show the person that they are beloved beyond their achievements, and seeing to it that, as far as it lies in our power, the narcissist can do no harm to himself or to others.

Maybe our relentlessly Tweeting president needs to be on the receiving end of a Twitter campaign: millions of Christians around the world telling him that God loved us, including him, while we were yet sinners.

But is no act of love to allow someone to destroy another. Such acts of bullying are dehumanizing to both the victim and the perpetrator. They feed the false narrative that personal victory makes the bully worthy of love.

Somewhere in here is our paradoxical Christian calling. We must love our enemy while protecting his victims from him. These are a single act of love.