As a character in the biblical story, God takes on the role of life-giver day by day because God gave life in the beginning.

The psalmist celebrates the divine provision of life:

How precious is your steadfast love, O God!
All people may take refuge in the shadow of your wings.  They feast on the abundance of your house,
and you give them drink from the river of your delights.  For with you is the fountain of life;
in your light we see light. (Psalm 36:7-10, NRSV)

The metaphor at the end is strange: “by your light we see light.” Typically, a brighter light will drown out lesser lights, not make them known. Perhaps the life-giving love of God is being depicted more like the sun: that which illumines other spaces.

In the final, climactic line of his lecture, “Is Theology Poetry?” C.S. Lewis famously said:

I believe in Christianity as I believe that the Sun has risen, not only because I see it, but because by it I see everything else.

In your light, we see light.

I’ve been thinking about this a good deal in relation to politics.

Bible People in the Secular Sphere

I have wrestled extensively with the question of how to be a Christian in the political arena. We can add political participation in a representative democracy to the list of critical things our lives consist of that the Bible gives us no direct guidance on.

Complicate matters a bit by throwing this into the mix: we are a pluralistic state, religiously. The state’s role in religion is to ensure free exercise without establishing any one over another. This means that faithfulness in this arena means preserving for others the right to practice and believe in ways that I might think are ultimately harmful or even offensive to God. 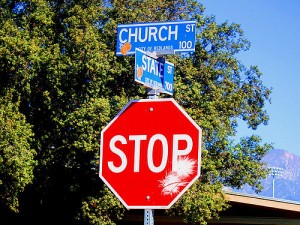 Roman Catholics have a done a better job at finding their way forward on this than Protestants have. It’s no accident that there are five Catholics and no Protestants on the Supreme Court. A rich tradition of “natural law” has made it much easier for a Catholic to engage in a broader conversation about law and ethics than it is for us “Bible alone” Protestants.

If my theology had its own Facebook page: it would stoke the ire of many in its family by saying that it is in a relationship with politics, but its relationship status would read, “Its complicated.”

Several years ago the seeds of my Christian political philosophy were sown by Miroslav Volf. He suggested that there was a very Christian way to think through politics and policies that would never be specifically Christian. We judge them by the golden rule and the command of love: Do to others what you want done to or for yourself, and Love your neighbor as yourself.

And yet the implementation is a lifetime of struggle and difficulty. It is all too easy to substitute “What I want for myself” for “What I’d want someone else to do for me.”

Volf gave me a start. But as I’ve wrestled with issues and parties and moments and people I have come to a couple of additional insights: (1) I will never be a “natural law” person, able to claim that there is some divine order anyone should be able to see; relatedly, (2) I’m never going to have a political philosophy that offers a set of values that is not ultimately judged by my Christian faith; and (3) not just the commands of love but the whole biblical story provides me with a range of sensibilities by which I judge political options.

It is in the light of what we have been given that I know light when I see it in the world of politics.

There are a few critical limitations to being able to sniff out Jesus in a political moment.

The kingdom of God is not a nation state. States can only do things that look more or less on earth like God’s will being done. We should never conflate the two.

More specifically, there are things a nation state must do that will never look like Jesus. A state will have to go to war. There is nothing more antithetical to the gospel story. There is nothing that looks less like life.

Additionally, we face the challenge of trying to walk a minefield of positions and parties and persons which one moment might look more like Jesus and another might look more like the Pharisee (i.e., the person who knows all the right answers and is the best reader of the sacred text but cannot see when the new moment requires a new way of understanding who we are) or more like the Roman soldier (i.e. the person who has no interest in religion except as fuel for the military-industrial complex).

The moral ambiguities of this enterprise have led many Christians throughout the ages to withdraw from politics. I can only imagine the untold number of Americans who wish we’d do it en mass today.

But as long as our neighbors need love I cannot believe that this is a faithful Christian option.

The “golden rule” is not completely unique to Christianity. However, in the other iterations I have seen it acts as a guard rather than a source of positive initiative. As I’ve seen it elsewhere it has been phrased, “Do not do to others what you would not want done to you.” I can fulfill such a command by sitting alone in my room and never seeing another human being.

But the imperative to do unto others as I would have done to me demands that I act. When there is injustice, where there is death of any sort, it is an imperative to be an agent of life. As people given access to the power of the political system, this means participating in what governs our lives and the lives of our neighbors.

It is not surprising that people who can’t agree on what their religion requires in the religious sphere also differ with each other in the political. But I want to host an extended conversation here about faith and politics, and I’d love to hear from you.

I’ve heard from so many people who want a better conversation. Maybe we can start one here.

February 11, 2017
Love Your Enemy: Thoughts on Donald Trump
Next Post

February 14, 2017 Love Your Enemy: LectioCast Edition
Recent Comments
0 | Leave a Comment
"Here is Larry Hurtado's (R.I.P.) response: https://larryhurtado.wordpr...Hurtado nailed it."
Derek A Man Attested by God: Response ..."
"Quite the contrary, the Christ Myth Theory arguments of Carrier, Price and others have been ..."
Truth Why I Am Still a Christian
"Do your own research; check out Richard Carrier, Robert M. Price, David Fitzgerald, Raphael Lataster, ..."
Spartacus Maximus Why I Am Still a Christian
""Without repentance there is no forgiveness." - Luke 17:4, Acts 3:19, 1 John 1:9"
Ocelot Aardvark Who Can Forgive Sins?
Browse Our Archives
Related posts from Storied Theology

Deconstruction – New Era of Change – Part...
Be like youth. Build your house on the rock “Therefore everyone who...
view all Progressive Christian blogs
What Are Your Thoughts?leave a comment
Copyright 2008-2021, Patheos. All rights reserved.