This Week’s Suggestion — “Lilo & Stitch” — And A Quick OOTO Announcement 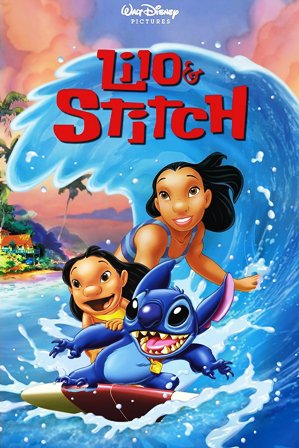 I’ll be stepping away from the blog for a few days, traveling to New Mexico to give a talk: “The Brutality of Grace: On the Value of Watching Dark and Difficult Films.”

So, naturally, I’m recommending a film that’s not even remotely dark or difficult: Lilo & Stitch, one of the finest (and most unusual) of the Nouveau Disney films. It’s on NETFLIX INSTANT, AMAZON INSTANT($)

See? Not typical, right? In fact, it’s so unusual that my friend Steven Greydanus — who inspired last week’s suggestion, let’s not forget — thinks it has almost nothing in common with Nouveau Disney. (Yes, I like that term. Imma gonna keep using it until I get tired of it. Which I won’t ever, probably. So…get comfortable with it.)

By contrast, Lilo & Stitch is a unique imaginative achievement that succeeds in its own right, without laying down any kind of template for future films to follow. Attempts to repeat its success, to make it into a formula, would be a dismal failure, unless perhaps the formula were to be “Give the creative people room to try something new and let them work without a safety net.” What a concept.

Steven talks mostly about story beats and themes in this piece, and he’s spot-on. But one of the things that always made it fascinating to me is that it looks so very, very different. Very “bottom-heavy;” very …um…cartoonish. Yeah, that last part sounds silly, given that I’m talking about animation. But the other Nouveau Disney-hehe-films tended to go for an odd (and oddly homogeneous) kind of pseudo-realism. And this one’s nothing like its siblings. (I like to call the pseudo-realism the “Sort-of-human-looking-except-for-girls-whose-eyes-must-be-bigger-than-their-waists” style. But I digress.) 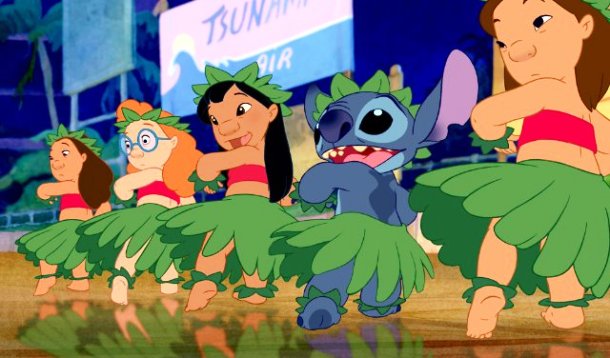 It’s super-distinctive, and it works wonderfully. (Speaking of distinctive, if you haven’t yet recognized a good bit of Stitch in co-directors Dean DeBlois’ and Chris Sanders’ most famous non-Disney work, How To Train Your Dragon, you will. It’s unmistakable.)

Speaking of “super-distinctive” and “wonderfully-working,” the soundtrack is spectacular. The Elvis is a lot of fun, of course, but it’s Mark Keali’i Ho’omalu’s songs that have always stuck in my mind.

Also, Lilo and Stitch is over 13 years old. …and I suddenly feel very old.

This is your badness level. It’s unusually high for someone your size. We have to fix that. 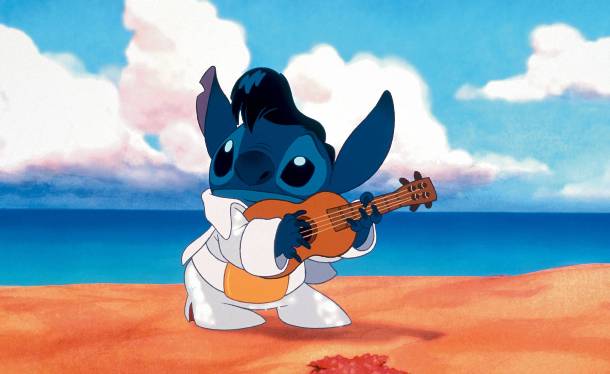 Attribution(s): All posters, publicity images, and stills are the property of Walt Disney Pictures and other respective production studios and distributors. 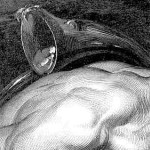 October 13, 2015
A Handful Of Mighty Musical Hunters
Next Post 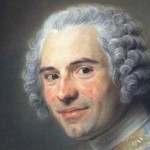 October 22, 2015 More (Inexplicably) Obscure French Baroque Music
Recent Comments
0 | Leave a Comment
"Did you manage to find if this was Alda or Asimov? I can't find either."
John Ender Intriguing Quote of the Day, Courtesy ..."
"I'm not sure there is a conclusion to be drawn, Burnetten, other than the one ..."
Joseph Susanka A Handful Of Mighty Musical Hunters
"Thanks for this assessment. I wish that some conclusions had been drawn. The similarity between ..."
burnetten A Handful Of Mighty Musical Hunters
"It's hard to be human and have choices? It's easy to be a dog or ..."
Fern Henley An Uncomfortably Challenging Quote from Aleksandr ..."
Browse Our Archives
Related posts from Summa This, Summa That